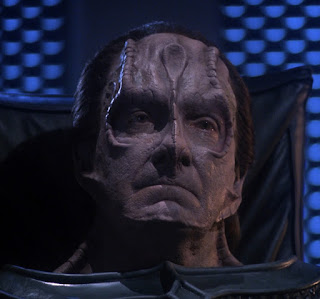 Last time on Star Trek: The Next Generation...

“And that's an important thing to remember here: Most of the stuff fans like to praise the most about 'Chain of Command', namely the truly gruesome and unsettling torture scenes that are justifiably held up as a human rights statement, are from Part 2. Part 1 in hindsight feels much more like a setup, not just to Part 2, but to Star Trek: Deep Space Nine. Because that's what this episode is really about, at a metatextual level if not an explicit one.”

“That's a historical fact I feel is frequently overlooked: This is the first two-parter in the history of Star Trek: The Next Generation to actually come right out and advertise itself as a two-parter from the very beginning. 'The Best of Both Worlds', 'Redemption', 'Unification' and 'Time's Arrow', the previous stories of this ilk, all hung on their cliffhanger endings: You were meant to watch them for 39 minutes assuming they were going to play out like a normal episode, and then be gobsmacked by a left-field revelation...'Chain of Command', however, makes it perfectly clear to us from the outset it's telling a story too big and too epic (and also too expensive, which was the main reason Michael Piller suggested splitting it in half) to be contained in one episode. Given the strategic December airdate, it thus also becomes Star Trek: The Next Generation's first proper mid-season finale, which seems like the only fitting way to reify Star Trek: Deep Space Nine.”
“Ro Laren's absence in 'Chain of Command' is really, strikingly noticeable and one can't help but wish they held Michelle Forbes' annual guest spot over for this story instead of shunting her into the teaser for 'Rascals'. Especially considering she had already turned down the gig over at Star Trek: Deep Space Nine, it would make sense to get her perspective on the Cardassians' withdrawal from her homeworld...”

“Because I do suspect that former ROTC man Ron Moore looks at Captain Jellico as someone he probably admires to at least some degree due to his bombastic and unapologetic old-fashioned masculinity. The kind of captain he'd probably like to serve under if he was in the military...And a story that lionizes Edward Jellico cannot hear the voice of someone like Ro Laren because it cannot imagine that voice exists. And this story, and both incoming Star Treks, are the poorer for it.”

And now, the conclusion...

It's possible to read “Chain of Command” as a kind of narrative collapse. With Star Trek: Deep Space Nine imminent, and even though it at least should have been plainly obvious by now that both it and Star Trek: The Next Generation were going to exist in tandem rather than conflict with one another (well...at least not *artistically*, but we'll get to that when we get to it), spinoffs still don't tend to happen in a TV show's imperious phase: It's entirely likely there was lingering anxiety about this, especially considering no-one except insiders had actually *seen* Star Trek: Deep Space Nine yet. Sure, there had been interviews and press junkets and all that good stuff, but audiences hadn't seen the finished product yet: Would this show be any good? Could it ever live up the standard set by Star Trek: The Next Generation? Expected questions, sure, and questions Star Trek: The Next Generation had been frequently asked itself back in its own first season. But 1993 is not 1987, and Star Trek means something very different now than it did then, and these are questions that are going to end up dogging Deep Space Nine all throughout its run.

So we have a massive bit of Star Trek: The Next Generation's world-building stripped away from it and passed on to its younger sister. Captain Picard is captured and brutally tortured by the Cardassians, who are now the new show's villains (and are even wearing the uniforms this show will make their trademark for the first time) in the very heart of Star Trek: Deep Space Nine itself: We may not be on Bajor proper, but it's what's going on there that's set this entire plot in motion, and there's that replimat set. The Enterprise is in the hands of a tin-pot reactionary who's on the brink of undoing everything Star Trek: The Next Generation has spent six years trying to build. This even ties into Ro Laren's egregious and conspicuous absence: We now know Star Trek: The Next Generation isn't going to be telling stories about Bajorans anymore, so there's no place for her. With the original impetus of her character taken away from her, she's sadly become redundant and unneeded.

(Not that this had to happen, mind: There's an entire tack Star Trek: The Next Generation could have gone with Laren that plays off of this instead of running up against it, it just doesn't.)

And yet even so, a piece of Star Trek: The Next Generation's essential power remains, because if “Chain of Command” is a narrative collapse it's got to be a staged one. We've known from the very beginning none of this is going to take because it's an advertised two-parter and mid-season finale/premier with a really stock plot. So in practice this plays out more like a show *about* fears of narrative collapse rather than an *actual* narrative collapse: There was never any significant danger to Star Trek: The Next Generation because Star Trek: Deep Space Nine poses no real existential threat. In fact, both shows stand to enrich each other in very palpable ways-The story of Bajor and the Cardassians is now bigger and more intricate than it had ever been before, and while we haven't yet seen how Star Trek: The Next Generation is going to respond with its own take, rest assured that it will. We now have the opportunity to look at the Star Trek universe from two distinct perspectives at once, and there are so many ways that can enliven our understanding of its complex and multilayered utopianism.

The torture scenes are of course incredibly well done and incredibly disturbing. It's a triumph for not just Patrick Stewart's acting (for which he prepped by watching videos from Amnesty International, an organisation of which he'd already been a supporter) but also Frank Abatemarco, who was responsible for the script for Part 2. If you're looking for something to point to as the defining moment of Abatemarco's brief stint as supervising producer, “Chain of Command, Part II” has got to be it: He went all out in his meticulous research to make sure the depiction of torture was as accurate, realistic and bone-chilling as he could possibly make it. He did such a masterclass job, in fact, that Patrick Stewart was gravely concerned when Jeri Taylor had to do a rewrite because he was afraid she's remove the episode's teeth and he felt it was too important a story to be pared down. Taylor had to personally reassure Stewart that she had no intentions of doing that...Even if it meant she had to submit herself to just as many hours of specific, horrifying, explicit and painful research that left her emotionally distressed and worn out. The finished product is every bit as difficult to watch as it was to write and, as unquestionably powerful and important as this story is and while I'm incredibly glad and proud it exists, that's part of the reason I personally can't actually watch this. Jeri Taylor herself said it should have come with a content warning.

The other part of the reason “Chain of Command” is such a tough story for me to watch, and maybe even the larger part, is Edward Jellico. I absolutely cannot stand to see him strutting up and down the Enterprise barking orders at people left and right. He is profoundly, captivatingly unlikeable: Everything I hate wrapped up in a boisterous, authoritarian, ham-fisted, jowly, square-jawed loudmouthed package. He's all of Star Trek's buried and forgotten militarism dragged up and put on parade for all to see, not out of grotesque shock and horror, but out of pride. Of course Jellico would like Data and promote him to first officer, because when he looks at Data he sees a literal automaton who will obey his orders, unthinkingly submit to his authority and carry out his wishes without question. The perfect model soldier.

That Ron Moore finds Jellico sympathetic instead of repugnant is a horrifying micocrosom of everything that's wrong with Star Trek as a franchise. Thankfully, Frank Abatemarco seems to have a better handle on what Jellico's role in this story should be, and makes him eat his own self-righteous words and take a blistering exprobation at the feet of Will Riker, who spent an entire episode as Jellico's whipping boy under Moore. But even though the narrative has finally come back around to side with the right people, it's too little too late and I can't help wishing everything would just end so we could move on from all of this.

And yet, with Captain Picard rescued and restored to his rightful place on the bridge, we actually can. Starfleet Command has left this whole ordeal completely humiliated, not that that's stopped them from utterly destroying everything in their wake. And, as always, it's left to the little people to pick up the pieces and rebuild our lives in the shambles the elites have left behind for us. It's time for us to start to heal.
Posted by Unknown at 11:00 PM