“Of a Kind”: Face of the Enemy 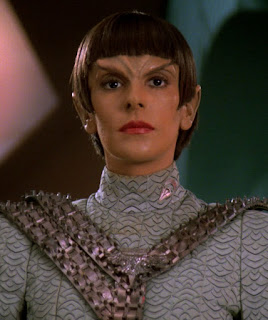 The prevailing fan consensus on “Face of the Enemy” was always that it's “The Good Troi Episode”: The one episode in the entire seven year run of Star Trek: The Next Generation that actually managed to do something interesting and compelling with Deanna Troi as a character. And that's blatantly bunkum: “Face of the Enemy” isn't the “good” Troi episode, it's the definitive Troi episode. It's the episode you show a Troi hater as the final closing argument for the defense of her character and for how brilliant Marina Sirtis is.

As an actor showcase episode, you'll find none better in the series. Marina Sirtis' last best outing, “Power Play”, still hinged on showing off one particular aspect of her acting range, albeit one we don't typically get to see on Star Trek: The Next Generation. And even Brent Spiner's numerous showcases mostly show off his knack for impersonations and comic character bits. By contrast, “Face of the Enemy” puts Marina front and centre and the story gives her an opportunity in every scene to deliver an incredibly interpolated and complex performance: Instead of locking her into “soft Marina” or “tough Marina” modes, “Face of the Enemy” finally gives her the chance to move through every emotion and pull the entire spectrum together into a very human and compelling performance that's still larger than life enough to stick with us long after the credits role. It's the absolute perfect venue for Marina to show off everything in her repertoire, and it's the story she's been starving for since at least the second season.

And yet “Face of the Enemy” is also a story that could in a sense only have come now. I mean idealistically speaking, as we are wont to do on Vaka Rangi, any reasonably conscious and aware casting director could have seen how bloody excellent Marina Sirtis was just watching the filming of “Encounter at Farpoint” and given her a pair of showcase venues in place of, say, “The Naked Now” and “Code of Honor”. However acknowledging the realistic production history of this particular series (and also, to be fair, the fact saddling Marina with Deanna Troi was always going to be something of a crippling handicap), we needed to get through things like “Clues”, “Power Play” and even “Man of the People” before we could get “Face of the Enemy”: Both Marina Sirtis and the production team needed time to experiment with pushing the boundaries of what Deanna Troi could do as a character before totally breaking them down.

Which brings us to the nut of what's really brilliant about this episode, which is that as much as it is a cathartic redemption of everything great we've always loved about Marina Sirtis and Deanna Troi, it's also very much the logical follow-up to a specific antecedent. And, perhaps counterintuitively, that's “A Fistful of Datas”. As we talked about in its respective essay, the big innovation of that story was that it was the first time the show had made an effort to channel Marina's adaptability as an actor through the character of Deanna Troi herself. Previous times the show tried to let Marina stretch her legs, they did so at the expense of Deanna: Either she gets mind raped or depowered so Marina can go full Ophelia (“The Survivors”, “The Loss”, “Violations”) or she gets possessed such that Marina is technically playing a character other than Troi (“Clues”, “Power Play”, “Man of the People”). In “A Fistful of Datas” though, Durango was explicitly a character created by Deanna, which gave Marina the unique opportunity to play Deanna purposefully putting up a performative artifice: It already helped that Durango is a character so far up Marina's alley anyway, and it was fascinating to see her play Deanna playing a character archetype that she could easily have played herself without that extra layer of performance.

(And performativity aside, this Romulan espionage job is essentially also just an extension, albeit an extreme one, of Deanna's pre-existing role as ship's cultural anthropologist. Remember how she's supposed to be that? What have empathic powers ever been code for?)

So really, “Face of the Enemy” is on one level just the next step from this. Major Rakal is explicitly an in-universe fictional identity (she was a real person at one point but, in true Romulan fashion, she's fictional now) and Deanna's ability to put on a compelling performance is the lynchpin to the entire plot. And man if it isn't one hell of a performance: Marina's delivery radiates mercurial fluidity, ebbing and flowing between Deanna's horror at her situation, outrage at the gall of Spock and N'Vek's “cowboy diplomacy”, and timid discomfort on the bridge of the Khazara, eventually giving way to positively frightening Tal Shiar despotic tyranny. There's of course the brilliant moment where she faces down the Enterprise and gambits outwitting Captain Picard, Toreth, N'Vek and everyone around her. And that incredibly unsettling moment where she explodes at N'Vek after his plan unravels, speaking not as Deanna Troi, but as Major Rakal: A dark, twisted manifestation of the freeform mutability we've always known about the Star Trek: The Next Generation characters.

Perhaps revealingly, I find this even more chilling than Denise Crosby showing up as a Romulan commander.

Speaking of the Romulans, this is an equally brilliant outing for them. “Face of the Enemy” is the greatest Romulan story probably since “Balance of Terror”, and precisely the kind of story Star Trek: The Next Generation needed long about “The Enemy” and “The Defector” when it was faffing about trying to get a handle on what to do with them. Unsurprisingly, writer Naren Shankar cites “Balance of Terror” itself as a major influence, stating he wanted to tell the Next Generation version of that story (and no, as underrated as it is, “The Neutral Zone” doesn't count). It definitely shows: Just like in “Balance of Terror” we get a visceral feel for the different layers and manifestations of Romulan society, and (in spite of what Ensign DeSeve says) the strong sense there's far from “clarity of focus” or universal love amongst Romulans for the imperialistic aspirations of their government. In fact, “Face of the Enemy” gives us a better look at Romulan culture than even “Unification” did.

A lot of this is due to the imperious Carolyn Seymour as Commander Toreth, the only person possibly on the planet capable of standing up to Marina Sirtis here. Whenever the two of them are onscreen together it's impossible to take your eyes off of how utterly commanding and mesmerizing they both are. Interestingly enough, in another nod to previously definitive depictions of Romulans, Toreth was originally going to be Joanne Linville's character from “The Enterprise Incident” (another episode “Face of the Enemy” is slightly reminiscent of), but with Linville proving to be unavailable during filming, the creative team called up the only other person who had the necessary chops (though I will say I'dve given them props had they gotten Denise Crosby too). Seymour had already left her mark as a Romulan in “Contagion”, where she played the effectively identical Subcommander Taris, but the team decided against bringing that character back because they'd forgotten she survived the events of “Contagion”.

No matter whether you call her Taris or Toreth though, the fact of the matter is Seymour is fucking brilliant, perfect in the part and one of the most memorable (and frustratingly underused) guest spots on the series. She's a hypnotically commanding presence, yet at the same time she also sells her weariness and frustration with what the Romulan Star Empire has becoming heart-wrenchingly well. She's loyal to her ship and her crew in the exact same way Captain Picard or Commander Riker is, and she has a similar opinion of her own superiors to what we have of Starfleet Command. It's impossible not to hear echoes of Mark Lenard's Romulan Commander from “Balance of Terror” in Seymour's Toreth, and she's every bit as sympathetic. But at the same time, this also highlights a major difference between “Balance of Terror” and “Face of the Enemy”, especially in regards to what the Romulans now represent.

In the Original Series, under Paul Schneider and D.C. Fontana, the Romulans were explicitly a mirror of the Federation (or Earth Command in “Balance of Terror” as that episode predates the Federation and Starfleet in Star Trek): On the one hand a dark mirror, but on the other hand a reflection that in some sense was better than us, having internalized and developed our best qualities better than we had. With the dictum that the 24th century ought to be an explicitly utopian setting (which remember, the universe of the Original Series never was, despite what Trekkers say), that symbolism fell by the wayside a bit as Star Trek: The Next Generation began. Not fully disregarded, mind...at least not at first. But it is true we haven't seen more than the briefest of glimpses at what Star Trek: The Next Generation Romulans might look like, and even then not since, well, Carolyn Seymour's last outing as a Romulan, actually.

The thing is, by this point in the joint Star Trek: The Next Generation/Star Trek: Deep Space Nine universe, the Cardassians have long since been positioned as the Federation's mirror. They were created in “The Wounded” explicitly to be equals to our heroes, and in “Chain of Command” we saw some some disturbing, though not inaccurate, paralleling between the ugliest impulses of the Cardassian and Federation military hierarchies. And in “Emissary” and “Past Prologue” both, Kira Nerys rather bluntly points out that the Federation are no better than the Cardassians and have no business meddling with Bajor. This frees up the 24th century Romulans to be what they quite frankly always should have been: The inverse of what they were in the Original Series-Not us-but-better, instead, us-but-a-little-bit-worse. The Romulan Star Empire is what an empire in entropy looks like. A paranoid, despotic, self-aggrandizing institution in decay and decline desperate to prove to everyone that it's actually rotting from within. All perfectly embodied in the histrionic fire and brimstone of the Tal Shiar. The Romulans now are one more direction the Federation of the immediate future could go, as an alternative to becoming the Borg.

Actually, when phrased like that, perhaps the Romulans are still better than us after all.