“Eternity is in love with the productions of time”: True Q

“Why one writes is a question I can answer easily, having so often asked it of myself. I believe one writes because one has to create a world in which one can live. I could not live in any of the worlds offered to me — the world of my parents, the world of war, the world of politics. I had to create a world of my own, like a climate, a country, an atmosphere in which I could breathe, reign, and recreate myself when destroyed by living. That, I believe, is the reason for every work of art.”
-Anaïs Nin, The Diary of Anaïs Nin 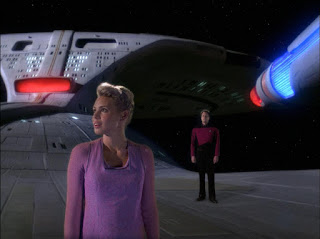 Every once in awhile Star Trek: The Next Generation does throw me an episode that seems custom-tailored to my chosen reading. “True Q” is one of them.

René Echevarria is another one of those writers with whom I only agree about 50% of the time, but he did work on a number of my favourite episodes. One of these happened to be “Transfigurations”, with which “True Q” certainly seems of a piece: Both stories can be read very easily as being about characters who undergo spiritual apotheosis and transformation and what happens to them afterward. “True Q” also bears some similarities with “The Nth Degree”, in which the character who experiences said apotheosis is guided through it by the Enterprise crew and must figure out for themselves how to carry those lessons with them on a mundane everyday basis. Any follower of this blog should know by now that a central guiding figure of this project is the shaman: Someone who travels the outer realms, learns from the gods and spirits and returns to Earth to make art about what they've seen in the hopes this improves the lives of the community.

This also gets us a nice redemption of Q that distills a few of the more dissonant and conflicting aspects of his character. Q is an expert trickster and manipulator, setting up situations or positing himself in the narrative just so to test us to see if we've got what it takes to go the next step. In fact tester and experimenter (and performer!) might be a better metaphor to explain what he does on the show than judge, which invokes the other half of Avital Ronell's “test drive”: A “drive” akin to Freud's eros and “death drive” to constantly “put ourselves to the test” to see if we measure up to our own standards. Q then becomes the embodiment of the benevolent form of Western modernity's test drive to better itself and constantly improve. This drives home the notion that Q is something to aspire towards being, or at least a diegetic metaphor for something to aspire towards being. A divine role model in his own right, and thus someone not at all too different from us, who reminds us of the ideals we keep striving to live up to. He's here to make sure we still do that and keep at it, which rather elegantly covers and combines his roles in “Encounter at Farpoint”, “All Good Things...” and “Q Who” with what he does here.

In “True Q”, Q literally does this to Amanda, constantly hovering over her to see if she's capable of putting herself on the level of the Continuum. There's that slightly dodgy bit of characterization where he seems to be lying to the Enterprise crew about his true motivations (which were apparently to once again “pass judgment” on an accused criminal), but to me this seems fairly trivial to rhetorically dance out of: Q has absolutely all of Star Trek: The Next Generation's narrative agency, and you can't tell me he didn't set things up so that Amanda would make her way to the Enterprise of all starships. Guided by the universe he guides her to where she most needs to be. And you also can't tell me he's not intentionally riling up the Enterprise crew (interestingly, Beverly in particular) and playing them against the Q Continuum (a diegetic manifestaion of the vulgar authoritarianism that could be read onto earlier versions of his character) so that they show the very best versions of themselves as well. This is unquestionably the best Q story since “The Gift”, but given John de Lancie's record three appearances this season, it's only the second best of the year, I'm afraid.

Amanda's presence also means this episode is a great update to and reclamation of several other narrative archetypes and devices Star Trek: The Next Generation has tended to struggle with. First of all, it's a better rendition of Wesley Crusher's story that conveniently comes before the creative team figured out what Wesley Crusher's story was going to be. It's uncanny, actually, how much time Amanda spends with Beverly and how often Jack and Wesley are brought up as plot points, especially considering Wesley was originally supposed to be Leslie: Effectively, Amanda *is* Leslie all but diegetically, another cosmic understudy coming in to fill a gap. And, since her story is ruthlessly efficiently done-in-one, we're not given the time to fret too much about the might-have-beens.

Incidentally, this handily means Amanda is another fantastic example of Star Trek: The Next Generation writing children or young people really well. The show has a reputation for constantly dropping the ball on this, and characters like Wesley Crusher and Alexander do not engender a ton of confidence in this regard. But it can: Amanda is probably the best example as she fully realises the potential that lay within making a teenage girl character a regular part of the bridge crew, however temporarily. Apart from her though, we've also seen Jeremy Aster in “The Bonding” and The Return of Okona, Timothy in “Hero Worship”, Marissa and the kids in “Disaster” (no matter what your feelings are on the rest of “Disaster”), and let's not forget Data is a functional child analog. Really, it's Star Trek: The Next Generation's basic obligation to get this right, considering, among other reasons, the fact they cast someone like LeVar Burton in such an oversignified role.

Invoking Leslie Crusher also means invoking the Mary Sue concept and the interesting explorations of it she hinted at, and “True Q” satisfyingly delivers on that count as well. Amanda is another in a long line of characters who, while certainly Enterprise crew material, maybe come from the outside and are having a bit of a hard time adjusting. Most notable among these are Reg Barclay, but also in this tradition are Doctor Pulaski, Assistant Chief Engineer McRobb, certain poorly written versions of Ro Laren, Terry Oliver and, coming soon, Sito Jaxa. The inspired decision to wed this character archetype to a traditional Mary Sue narrative means that Amanda's growing realisation of her special powers and destiny can only come about through travelling with the Enterprise crew: Notice how a crucial turning point for her is when, after asking Beverly what she would ask for if she could have anything (a faint callback to, and way better version of, Commander Riker's question in “Hide and Q”) and the doctor responds “the ability to help anyone”, even after she's told Amanda about Jack. From that point on you can tell it's clicked with Amanda that her path is to use her divine knowledge and abilities to help others grow and better their own lives, just as she herself has.

(I also quite like the fact Amanda is an expert in every area of specialization on the Enterprise: She's even more of a whiz kid than Wesley! But for her, it's a metaphor for how it's the unified holistic Enterprise itself as a pseudo-sentient entity she has to learn how to emulate, so Geordi's engineering work is just as important as Beverly's experiments.)

Speaking of Commander Riker, he's the one bum note in this episode for me. Well, not him exactly, but the story the episode tells about Amanda's relationship with him. We absolutely did not need the scene where Amanda selfishly whisks him away in the middle of dinner: The idea of her having a crush on him is a decently solid one and something that could have added to her story of growth (that is, after all, a situation some teenage girls are faced with), but the way it's handled here is just conflict-for-conflict's-sake humiliation. Almost as bad is the scene where Q causes Amanda to mess up Beverly's experiment, though at least there the scene clearly directed her ire to Q's meddling, not Amanda letting her down. I personally have a very deep-rooted revulsion to this kind of scene; I find it profoundly embarrassing in a way I wouldn't even be feeling it it happened to me and *literally* unwatchable. I freely admit that may well be a failing on my part, but seeing it crop up on any TV show is a surefire way, more than anything else, to make me cringe, shut it off and never turn it on again. Thankfully mute buttons exist, and the rest of the episode more than stands on its own.

Really, the only other criticism I can think to raise of “True Q” is that it didn't go out under the frankly far more memorable and appropriate working title of “Q, Me?”.
Posted by Unknown at 11:00 PM