“A Voiceless Song”: Chain of Command, Part I 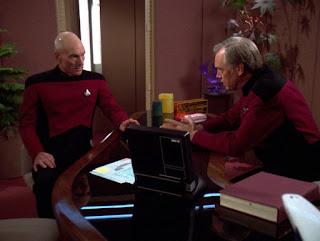 The reputation of course precedes it. Not just its own, but that of what it sets into motion. We know what's coming next. And so did everyone who saw this on initial transmission: Star Trek: Deep Space Nine was the show on everyone's minds that was getting all the industry buzz. The promo spots were already airing on TV, and we'd seen the new crew and the new space station. Anyone who followed science fiction would have known the new show was going to be set near Bajor and feature the Cardassians, so everyone knew what a mid-season finale involving the Cardassians over at Star Trek: The Next Generation *really* meant.

And that's an important thing to remember here: Most of the stuff fans like to praise the most about “Chain of Command”, namely the truly gruesome and unsettling torture scenes that are justifiably held up as a human rights statement, are from Part 2. Part 1 in hindsight feels much more like a setup, not just to Part 2, but to Star Trek: Deep Space Nine. Because that's what this episode is really about, at a metatextual level if not an explicit one. The teaser starts, and right away we get a series of bombshell revelations: Captain Picard is being reassigned, the Enterprise is getting a new captain and the Cardassians are withdrawing from Bajor. We're given practically no time to process any of this, just like the crew who are given no time to process the transfer of command from Jean-Luc Picard to Edward Jellico. And yet at the same time, we also know that none of this is going to be permanent, because we follow the entertainment rags enough to know Patrick Stewart isn't leaving the show and also because this episode is literally entitled “Chain of Command, Part I”.

That's a historical fact I feel is frequently overlooked: This is the first two-parter in the history of Star Trek: The Next Generation to actually come right out and advertise itself as a two-parter from the very beginning. “The Best of Both Worlds”, “Redemption”, “Unification” and “Time's Arrow”, the previous stories of this ilk, all hung on their cliffhanger endings: You were meant to watch them for 39 minutes assuming they were going to play out like a normal episode, and then be gobsmacked by a left-field revelation: Captain Picard got turned into a Borg. Tasha Yar is still alive, and a Romulan. Spock is back (even though we kind of knew he was coming). Data gets sucked into the past, where we know he's going to get killed. “Chain of Command”, however, makes it perfectly clear to us from the outset it's telling a story too big and too epic (and also too expensive, which was the main reason Michael Piller suggested splitting it in half) to be contained in one episode. Given the strategic December airdate, it thus also becomes Star Trek: The Next Generation's first proper mid-season finale, which seems like the only fitting way to reify Star Trek: Deep Space Nine.

(DaiMon Selok was even originally going to be Quark, and that scene is still shot on Deep Space Nine's replimat set in the finished product. We've also got Alynna Nechayev, the quintessential Evil Starfleet Admiral who will come back to harass both Captain Picard and Benjamin Sisko next year, dodgy as it is that the first overtly evil admiral is Russian.)

There's certainly no way any of this is going to get addressed properly in this show. Which, while understandable, is also a bit disappointing as it was Star Trek: The Next Generation that introduced the Cardassians and has a Bajoran conn officer. That's the other thing: Ro Laren's absence in “Chain of Command” is really, strikingly noticeable and one can't help but wish they held Michelle Forbes' annual guest spot over for this story instead of shunting her into the teaser for “Rascals”. Especially considering she had already turned down the gig over at Star Trek: Deep Space Nine, it would make sense to get her perspective on the Cardassians' withdrawal from her homeworld (which she barely knows to the point you have to question if she's even the same culturally, ethnically or genetically as someone like Kira Nerys) and possible development of a biological weapon of frightening proportions here.

Laren could have filled Worf's role in this story effortlessly, helping the black ops team with improv guerrilla tactics, pulling Beverly out of the cave in and helping her to rescue Captain Picard in Part 2. In fact, she would have been an even better choice for the mission than Worf, because she's both a combat specialist *and* someone with extensive knowledge of the Cardassians, their tactics and their history with the Bajorans. What better way to prove where her loyalties lie than helping Captain Picard and Doctor Crusher deal a blow to blatantly imperialistic machinations on the part of her former oppressors? She could even point out the hypocrisy and futility of the Federation getting involved with espionage and dirty backdoor realpoliticking, which is a glaring omission on the part of this story that I could not stop thinking about all while I rewatched it. This would also free up Worf to bark at Captain Jellico out of a sense he's unworthy to assume Captain Picard's mantle as Worf's lord.

(I'd also point out how bizarre it is that Starfleet Command jumps through hoops to get Captain Picard, Worf and Doctor Crusher, three *extremely high profile officers* to head up their super-secret black ops mission instead of, you know, Starfleet intelligence or Section 31 or something like that, but then again Starfleet Command *are* blisteringly incompetent, and the Enterprise wouldn't be involved in the plot otherwise, which would mean we wouldn't have drama. Speaking of...)

Then there's Captain Jellico himself. Most fans like to read him as an unsympathetic hardline asshole who comes in, throws his weight around and messes up the dynamic the crew built around Captain Picard. This is firstly revealing because this, more than anything else, proves that Star Trek: The Next Generation has finally arrived for a segment of fandom: Being an unsympathetic, humourless tightass is *precisely* the criticism leveled at Captain Picard and the show itself all throughout its first three seasons, and to now hear people complaining about somebody allegedly disrupting the Enterprise's establishment and warm sense of community is quite telling, and it brings portents for the incoming Star Trek: Deep Space Nine. And the fans are right: Jellico is completely insufferable: He's utterly the embodiment of that fraternal, militaristic rot at the heart of Starfleet and the Federation that the Enterprise is meant to oppose, and the only reason he hasn't gone down the path of Benjamin Maxwell is because Jellico is actually competent at his job and displays a measure of self-awareness and responsibility. But the thing about Jellico I think a lot of fans miss is that the story, and writer Ron Moore, *absolutely* intend for him to be sympathetic not just in spite of, but because of this.

Both Moore and Ronny Cox (who is brilliant in the part and a perfect fit, I have to point out) explicitly state that Jellico was intended as a showcase of another kind of Starfleet captain who was different, but just as good as, Captain Picard. Of course, the Enterprise crew and their stuck-up elitist self-assured so-called “utopia” wouldn't understand or respect this, and Captain Jellico would bring in some of that sweet, sweet conflict by waking them up with a solid dose of good old fashioned good old boy military know-how and get-it-done. Moore especially will leap to Jellico's defense at every opportunity, taking care to point out how him hanging up pictures of his children humanizes him. Which yes, it does. We don't live in the world of Alexander and Reg's holodeck programme where everyone is conveniently divided into white hats and black hats: We're all human, but that doesn't mean humans can't do terrible, evil things. Jellico loving his kids doesn't mean his actions and behaviour still don't paint him as an imperialistic, war-mongering monster.

It's entirely fitting, by the way, that our temporary captain for this week is Edward Jellico, a character who seems to have lept right off of the page of some old militaristic pulp sci-fi rag. Because “Chain of Command, Part I” is actually really, really stock. There's Moore's typical ham-fisted realpolitiking that's only slightly more tolerable here than it was in “Redemption” and Captain Jellico yells at some people a bit, but even that is just wallpaper for a series of protracted action sequences of people running through tunnels in Planet Hell looking for blinky props and shooting things. There's some charismatic heroes and villains trying to outbluff and outmanoeuvre one another. And I mean for fuck's sake there's even an actual, legit, no -bullshit *cave-in* and Captain Picard even gets *captured*. Remember, this is all before that haunting torture stuff happens in Part 2 (which was a plot point suggested by Michael Piller anyway): We don't know any of that is coming yet, all we know is we've ended on a stultifyingly boring “Our hero is captured!” cliffhanger and Douglas MacArthur is now in command of the Enterprise.

And this brings us back to Laren, actually, because this is also the reason she doesn't have a part in this episode. It's not the material, historical reason, but it's the real one. Because I do suspect that former ROTC man Ron Moore looks at Captain Jellico as someone he probably admires to at least some degree due to his bombastic and unapologetic old-fashioned masculinity. The kind of captain he'd probably like to serve under if he was in the military. And this means Moore wants him to be the hero of this story, when the hero should plainly be Ro Laren. But I don't think that's something Moore at this point in his life and career would have even been capable of understanding or conceiving of. There's no place for Ro Laren in a story that lionizes someone like Edward Jellico. And a story that lionizes Edward Jellico cannot hear the voice of someone like Ro Laren because it cannot imagine that voice exists. And this story, and both incoming Star Treks, are the poorer for it.