“Aside from his face, he's ugly”: A Fistful of Datas 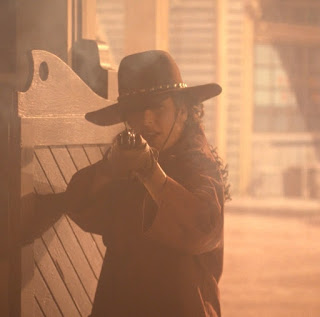 Yes, it is very silly. It amounts to little more than an acritical genre romp done of the most obvious and easy genre the show could have possibly done (and one that happens to be deeply historically problematic to boot), and it's even *literally* shot on a Hollywood backlot. It's also transparently an actor showcase episode, the plot serving as little more than an excuse to get Brent Spiner to do every Spaghetti Western cliche in existence. But the thing is, this is exactly the kind of story the holodeck exists to do, and I'm *way* more OK with this sort of thing here than I am in something like “Qpid”. For one thing, it doesn't have Q in it and isn't aiming to do anything more serious than “Western movie riff where Worf plays the sheriff everything is Data because of some reasons”. And I can respect that.

Of course, “A Fistful of Datas” isn't just a genre romp. It's also an actor showcase, and one of the best in the series. It's obviously one for Brent Spiner, so obviously in fact it's not worth commenting on except, perhaps to say that his take on Annie would probably not play as well today as it did in 1992. Although to the episode's credit, I got more of a Monty Python vibe from it where the point of the scene is a drag quotation of stereotypical feminine tropes and signifiers. Data is essentially a recursive performer, after all: He's Brent Spiner doing an impersonation of an android doing an impersonation of what he thinks humanoids are like. So I think you could actually redeem that scene rather strongly by writing it back into the pre-existing notions of performance and artifice that are part of Data's character, the holodeck's relationship to narrative and Star Trek: The Next Generation on the whole. But as predictably outstanding as Brent Spiner is, this is an equally good outing for Michael Dorn and Marina Sirtis, and that's easy to overlook.

(And not to be outdone, Brian Bonsall is really pretty excellent too with the material he has, and he's just about everything the child actors in “Rascals” weren't. As frequently poorly handled as Alexander is, it's important to remember Bonsall is a good actor in his own right, so he deserves the same redemptive treatment we afforded Wil Wheaton.)

But for me the stars of the show tonight are Dorn and Sirtis. Not only is this the best Worf/Alexander story on television to date, it's also the best Worf/Deanna Troi one because it plays so well to the actors' strengths. Dorn is visibly having a blast under Worf's awkward facade, and Sirtis finally gets to stretch her legs with Deanna Troi *as a character*. This is the first time we've gotten to see *Deanna* as mercurial and adaptable as *Marina* is, and she understandably knocks it out of the park. To me this is best exemplified by Durango's accent, which isn't Marina Sirtis doing a fakey Western accent and persona (which she could have very easily done and would have been perfectly understandable), but Marina Sirtis doing Deanna Troi (with Deanna Troi's own inflections, mannerisms and distinctive accent) doing a fakey Western accent and persona, which is a damn laudable bit of acting if I've ever seen one.

It turns out as well there's even more going on under the surface here than it might appear at first glance. “A Fistful of Datas” is essentially another day in the life episode, and although things go haywire because Star Trek: The Next Generation has to at least pay lip service to action sci-fi, this is manifestly not the point of the story. Primarily, this episode is actually about showing us what the crew do for fun when not out charting star clusters or fighting the Romulans, and it's a way better showcase of this than “Data's Day”. What we see is pretty much what we might expect to see, though that's not a bad thing at all: Most obviously there's Worf, who doesn't actually *like* taking time off, if for no other reason than it means he has to spend time with Alexander. Beverly is off writing, directing and casting her own play (and I love how this leads to the in joke of Beverly trying to convince Captain Picard he's a skilled thespian!) and Geordi and Data are doing science experiments. As for the captain, he's trying to practice his flute technique, which is a sweet callback to “The Inner Light”, although I've liked it even more if he'd been playing the actual “Inner Light” theme instead of Mozart.

(Captain Picard's awkwardness and annoyance in the opening scene, while funny, also sets in motion a story thread that will continue through the rest of the series. That is, that the Captain has trouble socializing with the crew. I have mixed feelings about this-There are some cute things done with it, like the teaser here and perhaps things like dating Jae of all people in “Schisms”, but I personally usually prefer it when he's more comfortable around the rest of the crew. I like Captain Picard offbeat with some eccentricities, but not overly introverted or antisocial: I just don't seem him that way.)

Plainly the holodeck stuff doesn't offer much in the way of transformative critique of the Western genre, which is a shame because it could, and it could very easily. This is no “Hire Us! Beautiful Bodyguards are a Better Deal”, and it's here that the Hollywood provincialism of Star Trek's creators starts to come into play a little: Everyone is just a *bit* too giddy about doing a Western film genre romp on the Warner Bros. backlot and nobody really manages to sober up enough to to dig a whole lot deeper. There's some fun mild genre savvy moments where Deanna correctly predicts the Bad Guy's sudden and inevitable betrayal and points out how in order to bring the story to a satisfying close, they're going to have to play it to the beat, oppressively stock and tropish structure and all. If I wanted, I could twist this into a reflexive commentary on Star Trek: The Next Generation's past history of stock runarounds, the franchise's own pulp roots and the off-repeated (and inaccurate) claim that the Original Series was “A Wagon Train to the stars”, especially as Star Trek: Deep Space Nine is in production and was being sold to certain specific audiences as “Fort Laramie in Space”. Quite frankly though, I don't think anyone involved was that self aware.

What I *do* think is interesting from a metafictional standpoint is the idea that Data turns into a Spaghetti Western stereotype because he's accidentally downloaded historical records into his personality submatrix or whatever you call it. It's only mentioned in a throwaway line during the scene in the observation lounge, but they very specifically say it's historical records, *not* a library of holodeck stories, even if some of the ship's affected areas are the recreational ones. To me, that raises issues about the narrative-building involved in writing history that don't get talked about a lot. It's often said that history is written by the victors, and while terribly true, the equally true but often ignored half of that statement is that history is written. I don't think that should be taken lightly at all: The very act of trying to record history necessitates reducing an infinite multiplicity of lived present experience to a story. A story by definition is already a performative artifice and thus a facsimile, and writing it down consigns it to the construct of past, effectively making it a dead and forgotten thing.

History doesn't give us a full understanding of the past, only of a story someone told about it, because the past is meant to live on with us as an equal part of eternal time. Once we lose touch with that, we need stories of the past, and, in time, the story comes to take the place of the lived experience in memory because it's stood in for it for so long in the collective consciousness. So I really like how in this episode we get the sense the Enterprise is so far removed from the wild west that literally all they have for historical records of the period are horrible Spaghetti Western movies. It's very much akin to how we today frankly have no idea what life was like for humans in premodern, prehistoric times: There's the standard anthropological and historical narrative, but that's every bit a story as anything else. This is a feature, not a bug, of the way Western modernity tries to keep track of its past, and the disturbing gaps in our knowledge are something that's always going to come with the territory.

And yet stories are important. A really good story can give us a reasonable facsimile, while a bad one might be misleading and destructive. But both good and bad stories each reveal their own interpretive truths that were felt by the people who told them, and understanding that in and of itself gets us a a little bit closer to remembering the whole.