“I've got a date, remember?”: The Quality of Life 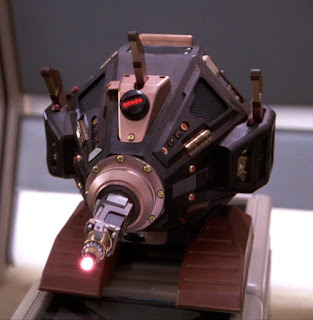 The immediate problem with “The Quality of Life” is that it's “Home Soil” again. This is something like the fourth or fifth time Star Trek: The Next Generation has done this brief, and, like clone degeneration or VHS signal decay, each iteration has been a successively less effective version of “Home Soil”.

The secondary problem with “The Quality of Life” is that it's not “Cost of Living”. Prior to this watch I tended to conflate the two stories (in my defense, those are *criminally* similar titles: Almost as bad as “A Matter of Honor/Perspective/Time”: I'm stunned I never got *those* mixed up). This error on my part actually elevated the two stories considerably in my memory, as I had assumed the Lwaxana/Alexander story of “Cost...” was the A-plot of “Quality...”, with the Exocomp stuff as the B-plot (and also that it was a Season 5 story, which elevated that whole season considerably in my memory). The tertiary problem with all of this is that “Cost of Living” sucks canal water and the Lwaxana/Alexander story would have done nothing but drag this hypothetical episode down: As much of a retread as “The Quality of Life” might be, it's still solid and watchable, even if it is also mediocre and forgettable.

That's not to say, however, that I don't have problems with this episode apart from it being a retread. My biggest issue is its handling of Captain Picard and Commander Riker, the captain in particular: Michael Piller-era Star Trek: The Next Generation has a bad habit of trying to force conflict amongst the Enterprise crew by writing someone, usually one of those two, in ways that seem weirdly and spontaneously out of character to me in order to put them at odds with somebody else in the crew. So we get things like Geordi's humiliation conga in his solo outings, Riker flipping out at Worf in “Ethics”, Deanna Troi being a codgy stick-in-the-mud in “Cost of Living” and most things involving Captain Picard and artificial intelligence post-“The Measure of a Man”. It seems like whenever the story needs someone to play the role of a stodgy bureaucrat or square oldster who needs to have their worldview shaken up, the team would rather throw out Captain Picard's established characterization instead of actually being creative.

Both Riker and Picard are off-puttingly out of sorts when it comes to the possibility the Exocomps might be thinking life-forms, Picard especially. I simply cannot buy that they would require an entire episode to become convinced that the Exocomps are alive when they live on a starship inhabited by hyper-evolved androids and sentient holograms. Painfully, “The Quality of Life” even *knows* this and gives us a whole scene where Data has to defend the Exocomps' right to exist using the same rhetoric Captain Picard did in “The Measure of a Man”, even name-checking that very episode. It feels like it exists solely to try and handwave away this rather glaring affront to characterization continuity, which indeed it does and the creative team have all but admitted as much in subsequent interviews.

But it's not just “The Quality of Life”. I maintain the team similarly dropped this very specific ball in both “The Offspring” and “I, Borg”, so my criticisms of this episode are equally applicable to those previous ones as well. And I've heard the defense that this is in keeping with Captain Picard's character, because he and he alone is older than the rest of the crew and less accepting of things that challenge his worldview in this manner, or that he has a hard time with artificial life in particular. I know there's even a scene cut from “The Measure of a Man” you could cite to support this. But I don't buy that at all for two reasons: For one thing, that scene was cut for a reason, and if Captain Picard was really that bigoted he shouldn't be in command of the Enterprise, let alone working in such close proximity to Data. This also runs completely contrary to Captain Picard's views on not just Data, but the Microbrain, Minuet and Professor Moriarty, and I have a hard time accepting he could be that hypocritical. And anyway, even if you did read the captain that way, those arguments shouldn't apply to the supposedly younger and more tolerant Commander Riker. More to the point though, I really resent Picard and Riker being wheeled in as generic authority figures for people like Data to look good while proving wrong. That's no better than any of those old Wesley Saves the Day potboilers.

As for the Exocomps themselves, they're the most interesting thing about this episode by far. Not for any particular story reasons, mind, but because they're blatantly Nanmo from Dirty Pair. They are, in fact, so plainly, obviously and deliberately Nanmo they're a contender for the must blatantly Dirty Pair thing in all of Star Trek: The Next Generation. I mean, they just are: If you look at them and have watched Dirty Pair it is literally impossible to see anything else. So really the most fun we can have with “The Quality of Life” is to see what happens when we bring in the Dirty Pair invocation. Nanmo herself doesn't give us a ton to work with because she's unfortunately not a lot more than a cute robot mascot created to help the marketability of a TV show pretty much everyone involved knew was going to be a fairly hard sell (interesting to note that under no circumstances did writer Naren Shankar want the Exocomps to be cute robot mascots).

Nanmo is a very TV series invention really only befitting the tone of that show and nothing else (notice how she only makes a tiny cameo in Dirty Pair: Affair of Nolandia and isn't in any of the subsequent Sunrise animes): She, along with the decision to turn feral Coeurl Mughi into a giant cartoon cat fluffball came out of the identity crisis Dirty Pair was facing in the mid-1980s, with Sunrise throwing various things at the wall in order to find that one elusive wider demographic that would embrace the series. That said, what Nanmo does bring to the table are transhumanist themes: The one episode where she played anything more than an incidental role in the plot was “Criados' Heartbeat”, episode 5 of the Dirty Pair TV show. There, she prompts Yuri to remove her memory disk and fire her into the core of the psychologically damaged sentient space station the titular Cirados has turned himself into as effectively a kamikaze strike. Kei explains that as long as they have that disk, which contains all her essential programming, Nanmo can very easily be rebuilt. So, even though the girls themselves are eternal cosmic concepts, Nanmo is the only character in the Classic Anime Series who is *diegetically* immortal and transhuman.

This makes for a remarkable contrast with the Exocomps in “The Quality of Life”, because it's their very fear of mortality that's the first clue they're sentient. Doctor Crusher even cites an instinct towards self-preservation as one of the key traits that an outside observer can use to determine whether something is alive or not. In fact, the Exocomps and Nanmo are so radically different thematically, one wonders why Rick Sternbach decided to model the former on the latter, except perhaps to troll Naren Shankar. I'm not sure I have a larger point here except to point out how weird and strange that is...Perhaps it's an indication of the two series' respective attitudes towards speculative fantasy: Star Trek: The Next Generation does seem to prefer to at least put on airs about being Hard SF grounded in gritty materialism, though this is strange to say about the show that gave us “Where No One Has Gone Before” and “Transfigurations” and that's going to throw “Emissary” at us in two weeks (which was even written by the current showrunners), not to mention "Dark Page", "Eye of the Beholder", "Masks" and "Emergence", all of which are coming next year.

(Indeed, even the previous episode that featured an obvious Nanmo stand-in had far more overt mystical themes about it. And it was also written by Michael Piller.)

Dirty Pair, by contrast, in all its incarnations is far more comfortable blasting off into the mystical and is not at all afraid to tackle spiritual, religious and occult themes. In fact, they're woven pretty firmly into the fabric of how Dirty Pair works. And it's that very comfort that I think is telling here, because Star Trek is way more similar to Dirty Pair in this respect that it seems to think it is...Or perhaps it's more accurate to say how it wants us to think it is. These are two franchise that are ultimately going to both be doomed to the cult sci-fi ghetto, but right now Star Trek: The Next Generation isn't cult sci-fi: Far from it, it's the most popular show on television. And once again I have to wonder if the people making it are really, actually aware of that. Dirty Pair's populist success with the TV series and Dirty Pair: The Motion Picture may have been short-lived, but it was at least expected, planned and accounted for.

Maybe the cute robot mascot made a difference after all.