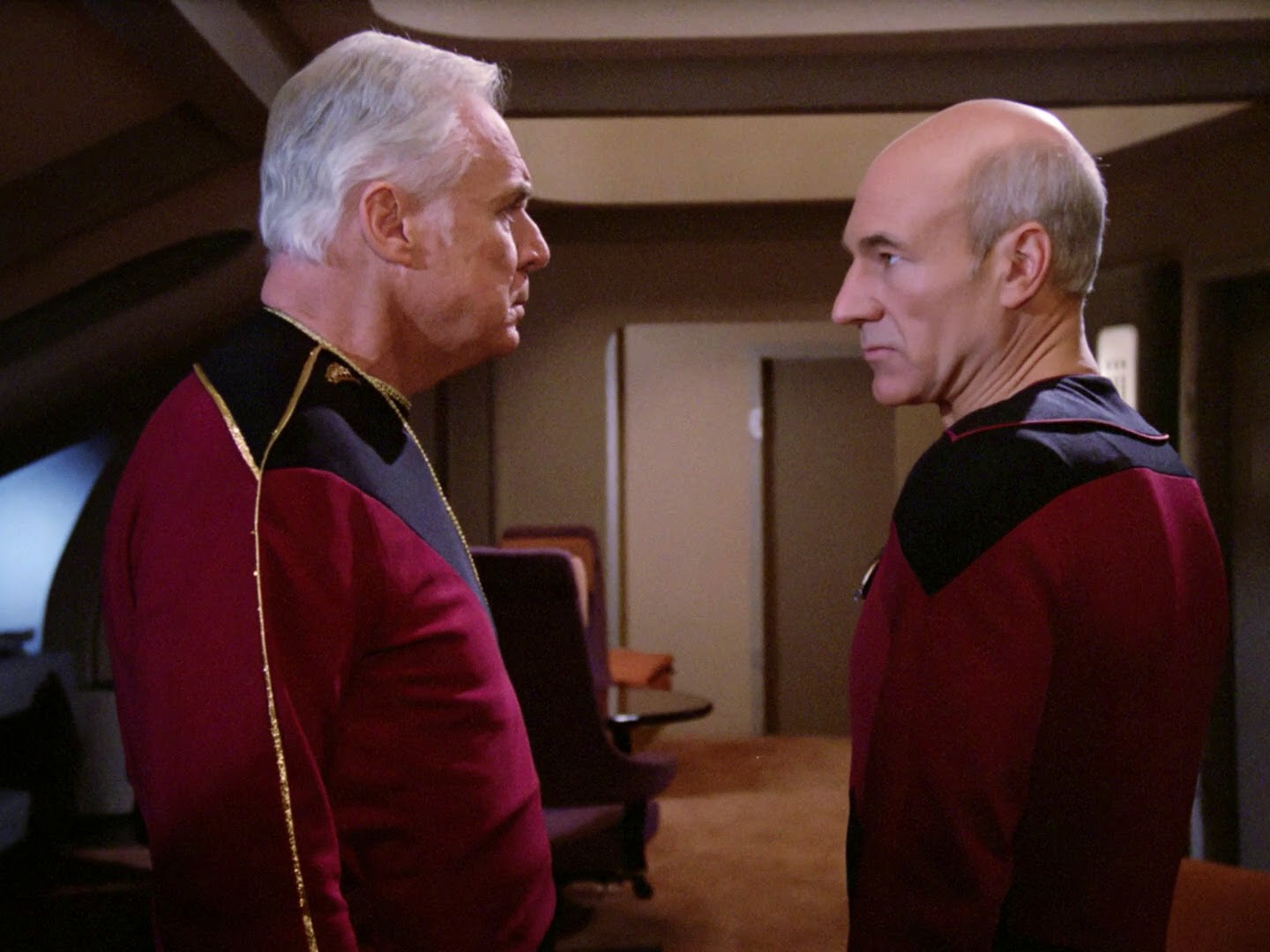 Despite its reputation and admittedly rocky week-to-week quality, there's a remarkable thematic cohesion to Star Trek: The Next Generation's first season, perhaps even more so than in later years. Reoccurring motifs are emphasized and re-examined with dutiful regularity, episodes are clearly designed to build off of one another and there are quite a few attempts at introducing both long and short term story arcs. Granted they're not always successful, but the intent is there and should be acknowledged.

“Coming of Age” is a solid example of this, and also serves as a functional microcosm of the show as it exists at this point in time. Most notably, the story arc it tries to put into place actually sticks here, unlike in “Angel One” where it gets forgotten, reintroduced at the last second in the season finale, and then hastily abandoned again. Obviously, we know the big Conspiracy with Starfleet Command that has Admiral Quinn and Dexter Remmick all paranoid is going to pay off at the end of the year in an episode I'm currently forgetting the title of. That's worth dealing with then, though I will point out now that the story arc as envisioned and the story arc as realised were not exactly one and the same. But even as a standalone work, “Coming of Age” is quite structurally well-done, with two distinct subplots and a metaplot that all revolve around the theme of maturing and reaching new stages in one's life. The first one involves Wesley Crusher so we're going to avoid talking about it more than necessary (though I'll give a nod to the Benzite, another one of my favourite Star Trek: The Next Generation creature designs, even if the one I remember is Menden from “A Matter of Honor”, not Mordock here), but the one about Captain Picard contemplating accepting a promotion and leaving the Enterprise is really quite lovely.

In some ways, this is a rejection of Kirk being promoted to admiral in Star Trek II: The Wrath of Khan. But let’s stop and think about that for a minute: First of all, even in 1988 it took guts to stand up to Wrath of Khan, already firmly entrenched in fan consciousness as “The Bestest Most Perfect Star Trek Ever” (though younger audiences who weren't libertarian worshipers of Robert A. Heinlein might have posited Star Trek IV: The Voyage Home instead). Quinn even suggest Picard go teach new academy recruits, just like Kirk did. More to the point though, a fairly recent and common redemptive reading of Khan I've seen goes out of its way to talk up and romanticize the idea of Star Trek characters growing old and settling down, citing both Kirk's promotion and the fact not only Khan, but David and Carol Marcus coming back into his life as examples of how the narrative is in support of this.

Several things bother me about this reading, however: First of all, the only guiding thematic impetus behind Star Trek II: The Wrath of Khan was “kill off Star Trek as comprehensibly and permanently as possible”, and any incidental nuance just came from Nicholas Meyer wanting to tell a a solid aging story while he was at it. Secondly though, growing old and settling down are very un-Star Trek themes, and, as much as I do chew into Meyer, this is the point he's making and he's right to in this case. Star Trek is about *never stopping* learning and travelling. It's about making a commitment to always strive for self-improvement and growth throughout life. That's why we're on a ship that we'll soon learn doesn't even have a home port (actually, in the episode that concludes the story arc introduced here): The journey and the voyage must never come to an end, because it's through journeying and voyaging that we learn more about ourselves and others. Growing old and settling down are the antithesis of these very important truths: They're the symptoms of resignation and complacency, and if there's *anything* Star Trek has taught us, it's *never* to give up or become complacent.

But as I've said before, “growing up” and “growing old” are not synonyms. This is why this episode is called “Coming of Age”, and why teenage Wesley Crusher is the other side of the narrative coin. Captain Picard knows that to accept promotion would mean accepting stasis, and as an explorer at heart that's not something he can support (and isn't it interesting that Picard seems to equate Starfleet Command with toxic stasis?). But the word choice in both the script and Patrick Stewart's delivery is very careful and particular: There's a lot of talk about “where he belongs” and “what his path” is, and never about growing out of the Enterprise and leaving it behind. As part of his constant growth and maturation, Captain Picard has come to the conclusion that where he really belongs is the Enterprise: Here is where his true home is. This is also why the Enterprise has room for families, because it allows those people who want to start a family as part of their personal journey to do that while still travelling the stars. It's a new kind of bottom-up, egalitarian domesticity that is but one path available to people who live on the Enterprise: Voyaging helps us understand a sense of recursive cosmic community, connecting us with each other as well as with the universe as we travel the stars together.

There's a somewhat famous quote by Arthur Ransome that's always inspired me and that I think is particularly appropriate here an within the context of Star Trek: The Next Generation in general:

“Houses, are but badly built boats so firmly aground that you cannot think of moving them. They are definitely inferior things, belonging to the vegetable not the animal world, rooted and stationary, incapable of gay transition. I admit, doubtfully, as exceptions, snail-shells and caravans. The desire to build a house is the tired wish of a man content thenceforward with a single anchorage. The desire to build a boat is the desire of youth, unwilling yet to accept the idea of a final resting-place.”

It goes without saying that this is a sentiment that resonates particularly near and dear to my heart. Aside from that though, it's one I think Captain Picard would probably agree with to some extent as well. Because this is what's so special about the Enterprise: It's both a house and a boat. It's a place you can call home that neither sacrifices a sense of familial community nor the restless urge to wander and grow. It's a house that travels with you, and that you travel with. In fact, note the only criticism Remmick can come up with of Picard's leadership is that his crew is “too familial” (and how telling it is that Starfleet Command would take issue with that). And, to head off the obvious objection, the universe of Star Trek: The Next Generation is not one that looks down upon people who do choose to stay in one place, as we'll eventually see with Benjamin Sisko the builder and healer, for whom travel and voyaging means slightly different things. But as much as Sisko's place my be Deep Space 9, Picard's really is without question the Enterprise, and I can find no fault with that.

But another reason I can't see “Coming of Age” as a commentary on Star Trek II: The Wrath of Khan is because I still like to think of Star Trek: The Next Generation existing in its own universe and continuity separate from the Original Series, as Gene Roddenberry had originally intended it to be. I mean yes the show has pretty much shot that reading to pieces several times already, what with Klingons and Romulans playing major roles and all of “The Naked Now” (even this episode is not immune: One of Wesley's colleagues is obviously a Vulcan). But I like to avoid flamboyant fanwank in my own work as much as I do in the shows themselves, so what can we glean from “Coming of Age” about Star Trek: The Next Generation's own interiority? I think what this story is really about, by virtue of its recursive themes and motifs, is about the series starting to mature into its own person. Like we saw with Admiral Jameson in “Too Short a Season”, as much as Star Trek: The Next Generation is, well, the new generation, it's also unafraid to be marked by age, experience and wisdom. It's a show that embraces all these things and fuses them perfectly to the restless wanderlust of youth. And that, perhaps above all else, is where its utopia truly comes from.

Another one of my favourite quotes drives this home, this time from Gary D. Christenson of TV Guide not long after the conclusion of Star Trek: The Next Generation's first season in July, 1988:

“Star Trek depicted us in reckless youth, with a Starship captain who tamed space as vigorously as we laid claim to the future...Star Trek: The Next Generation reveals the child grown-a little more polished, but also more complacent. And if there's a bit of gray and a wrinkle or two, so much the better.”