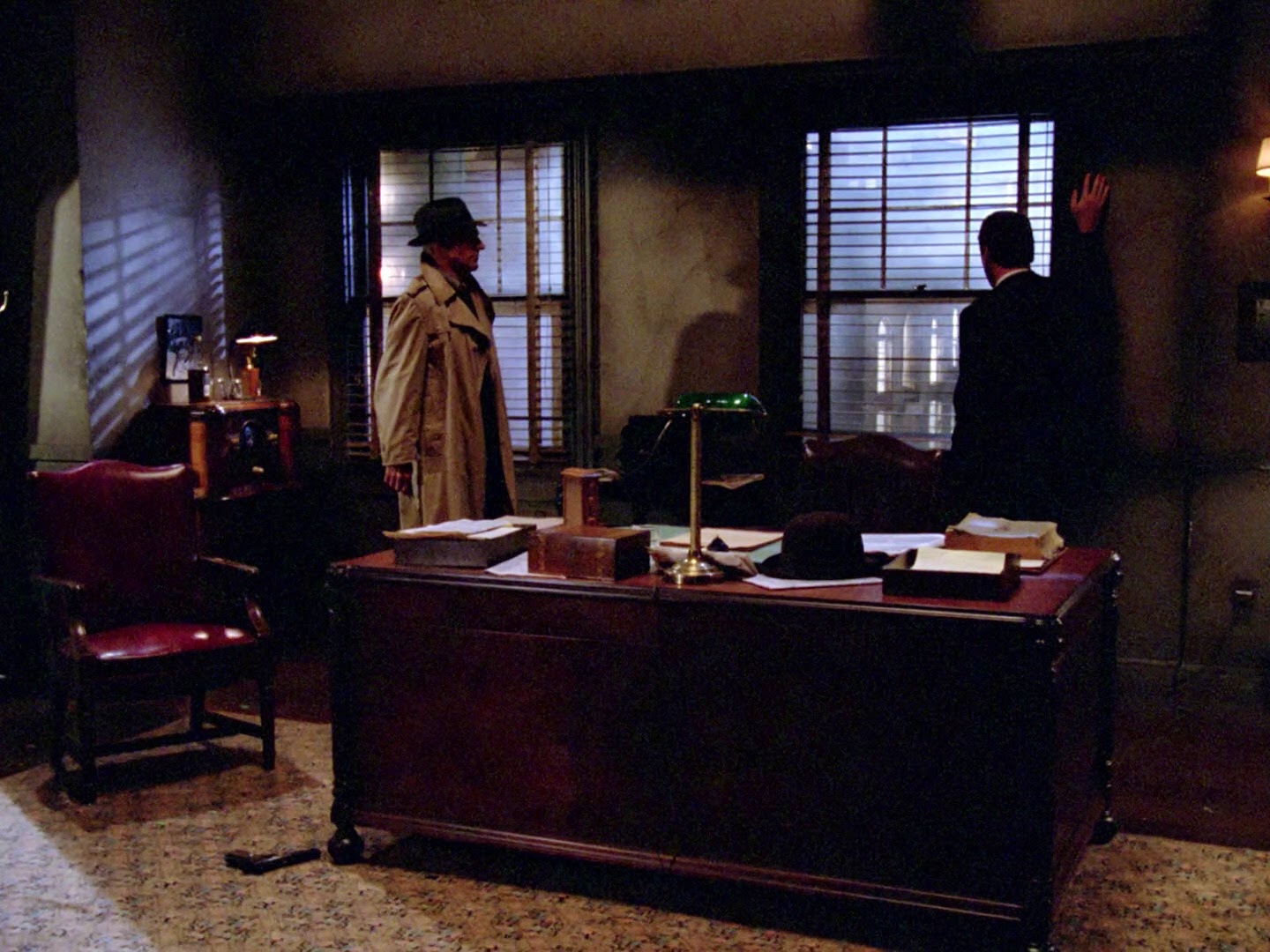 “The Big Goodbye” is not the first Holodeck story, although it has that reputation among fans. We've seen the Holodeck used in a few episodes already for both training and recreation, but of course what fans mean when they say this is that “The Big Goodbye” is the first Holodeck malfunction story, which, shall we say, goes on to be something of a cliche in 1980s and 1990s Star Trek. Though even that's not technically accurate, considering “The Practical Joker” from the second season of Star Trek: The Animated Series was for all intents and purposes the debut of both the Holodeck and the Holodeck malfunction plot, even if it wasn't called that at the time.

Considering that, as a narrative device, the Holodeck offers basically limitless potential for intriguing and captivating storytelling and the overwhelming majority of Star Trek's writers default back to this one basic plot from a not-even-all-that-good episode from Star Trek: The Animated Series' decline period is concerning, but not the issue at hand today, because “The Big Goodbye” does work, and work very well. One obvious reason why is the actors, who are in top form: They're always in top form so it's quickly going to become irrelevant to keep mentioning that, but the specific way they're in top form this time around is because the structure the Holodeck offers allows Star Trek: The Next Generation to crash into period piece drama and genre pastiche. The common explanation given for this, echoed famously by Wil Wheaton in his own review of this episode, is that actors love this sort of thing anyway so naturally it's fun for them to throw themselves into a brief like this and just go nuts with it. And there certainly is some of that: I'm convinced the majority of the reason Data has a part here is so Brent Spiner can do his best hard-broiled gangster routine, which he's of course amazing at.

But Spiner is actually a really good example of how the actors go above and beyond, not just in this episode, but every day on set. Data's part isn't just an excuse for Spiner to do funny voices, he's a kind of Harpo Marx archetype who's constantly comically bewildered by his situation. Spiner's skill at impersonations actually gets written back into the character as Data's awkward efforts to blend in and get into his role. He's done this before, obviously, but this is the first time where the production starts to work with this and give him the room he needs. Gates McFadden does something very similar: A natural comedian, McFadden is clearly relishing the opportunity this episode gives her, and this is Bev's best outing yet. Gates doesn't play Crusher at all straight here, between her fumbling and tripping in the Holodeck to the exaggerated and pouty way she conveys the alleged “romantic tension” with Captain Picard, Gates turns Bev into basically a pantomime character here, it's wonderful and it's right up her alley. What “The Big Goodbye” is then is the first time on Star Trek: The Next Generation where the actors overtly get the chance to bring some of themselves into their characters, which is the defining moment that changes the crew of the Enterprise from one-note stock retreads into the beloved people they would become.

(Special praise is also due to LeVar Burton, who gets a lot of time with Wil Wheaton here and immediately shows that Geordi is probably the only character who can work with Wesley Crusher and make the scene less than insufferable. LeVar of course by this point had four years of experience as a children's educator here, and it shows in the way he has Geordi interact with Wesley and, actually, Data as well. It's frankly exactly the sort of thing Geordi should have been doing from the beginning. I also can't very well not give a nod to legendary, and legendarily cantankerous, actor Lawrence Tierney and his show-stealing portrayal of Cyrus Redblock.)

But it's ultimately the Holodeck that facilitates all of this, not just on a production level but on a metatextual one as well. Because the Holodeck is not an excuse to do a genre romp, though lesser creative teams will use it for that end, and nor is it even to do a straightforward Doctor Who-style narrative intruder story, although Brent Spiner, Gates McFadden and to a lesser extent Patrick Stewart do emphasize that angle to some degree here. But the true purpose of the Holodeck is the means by which Star Trek: The Next Generation can explore the power of symbols and fiction. “The Big Goodbye” is not one of the famous “Holodeck programmes gain sentience” stories Star Trek will toss out with wild abandon in later years, though it could be argued the groundwork is laid here: What it is instead is a story where different kinds of fictional characters are forced to interact, and where the new Enterprise crew gets to join the ranks of oral heritage. The reason the Holodeck can be the vessel by which the crew and the show gets this opportunity is down to its fundamental element. According to The Star Trek: The Next Generation Technical Manual by Rick Sternbach, a document that outlines all the blueprints, systems and operational details of the USS Enterprise NCC-1701-D, the Holodeck runs on an unstable radioactive transuranic (meaning ahead of uranium on the periodic table) element...called keiyurium.

This then is at long last the moment where the Lovely Angels finally crash-land into Star Trek: The Next Generation, reshaping and intertwining the fate of the two series forever. And it makes perfect sense that this should happen in “The Big Goodbye”, a story about recursive performativity (not only are the characters playing roles in their Holodeck simulation, but the aforementioned bleedthrough over the boundary between the actors and their parts is the first time a critical and defining aspect of Star Trek: The Next Generation begins to crystallize), and through the Holodeck, which uses light, colour and sound to create a fantasy world of performative artifice. Captain Picard assumes the mantle of a fictional hero of his, in essence bringing Dixon Hill into himself and giving him a transformative rebirth and reconceptualization. And it's also very telling that Dixon Hill himself is a private eye and his world is one of Raymond Chandler-esque hard-broiled detective fiction, the very same genre that a nascent Dirty Pair once called a parent.

But no congress between devotee and divine can happen without situated mythopoeic transformation and sublimation, and both Star Trek: The Next Generation and Dixon Hill leave “The Big Goodbye” profoundly altered. Having awakened into its transcendent fictional power, Star Trek may now conjure dreams, but, as Whalen's injury demonstrates, it's no longer allowed to place itself above other people and concepts. It's been disabused of its presumptuous God Trick illusion: Becoming a fictional ideal means you're one thing to strive for among many, not the only one. And Dixon Hill is rendered essentially outmoded, with Star Trek's newfound divinity rendering it for all intents and purposes vestigial. We weep for Picard's good friend Lieutenant McNary who, his part having been played, must stand alone in Dix's office as the stage lights go out. Star Trek has transcended to a higher plane of understanding, but in doing so it's transcended Dixon Hill, hard-broiled detective fiction, and indeed its own pulp roots.

Which does bring us all the way back back to Kei and Yuri, for the Enterprise crew's invocation of Dixon Hill is really simply an allegory in microcosm for Star Trek: The Next Generation's invocation of Dirty Pair. The Angels have been summoned, and nothing is ever going to be the same again. Enlightenment is not always reached without a manner of trauma, as the cleansing light of Angels can also scorch. Perhaps this is why keiyurium is an unstable radioactive isotope. We've caught our fist glimpse of the sublime and eternal here tonight, but the ego death this necessitates involves casting aside everything we thought we knew about what science fiction is. Affair of Nolandia and Dirty Pair: The Motion Picture pointed the way forward, and Star Trek: The Next Generation has already demonstrated its strongest in the realm of images and memory. This is no longer recognisable as classical science fiction. This is something far stranger, grander and more wonderful unto itself.
Posted by Unknown at 11:00 PM