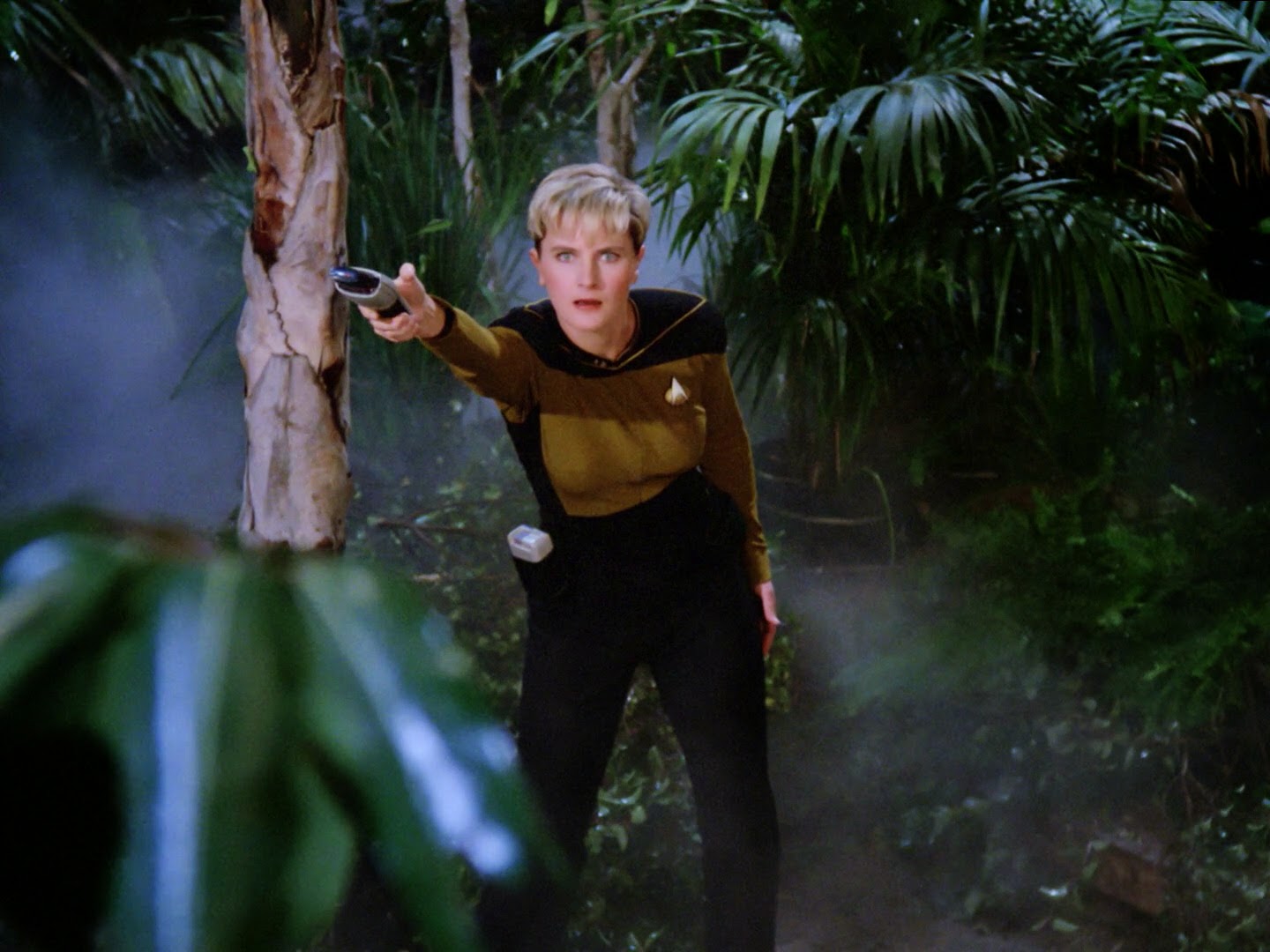 “The Arsenal of Freedom” is without question near the top of my list of highlights for Star Trek: The Next Generation's first season and I'll never understand why nobody seems to talk about it. This isn't just good with qualifiers, which is how you can describe a decent segment of this year if you were inclined to be uncharitable, it's genuinely *great*. It's a flagrantly experimental story that's one of the first clear departures from the Original Series template Star Trek: The Next Generation is saddled with and is, in retrospect, probably the definitive example of the kind of risks the series only took in its inaugural year. Everything about this episode is demonstrative of a show that's creatively energized, bold, confident and self-assured.


Funny thing then that “The Arsenal of Freedom” was also the subject of one of the biggest, ugliest creative disputes of its early years. The debate in question apparently stemmed from the scene where Captain Picard and Doctor Crusher fall into the underground control room. In the original script, Picard was to have been injured and Beverly would have to tend to him, confessing her feelings for him in the process. Writer Robert Lewin wanted it to be an extension of the romantic subplot that supposedly underwrites their characters, but Gene Roddenberry wasn't enthusiastic about the idea so the roles were switched and the dramatic moments were toned down by Maurice Hurley, who handled the final script. As a general rule, Hurley was always fiercely loyal to Roddenberry as a producer and always kept in lock-step with whatever he thought he wanted. This spat resulted in Lewin leaving the show, and is sometimes cited as evidence of Roddenberry’s (and Star Trek: The Next Generation's) frustrating lack of interest in conflict and character development.


And it's a bullshit argument.

While it's true Roddenberry was not terribly interested in character drama (he was far more intrigued by ideas and concepts as both a writer and producer, sometimes to his benefit, other times to his disadvantage), there are several reasons why Roddenberry might not have approved of Lewin's first draft. First of all, Beverly's action would have been flagrantly a Hippocratic Oath violation, which is my first issue with it, but also the scene as originally written was simply put cornball and not Star Trek: The Next Generation. People always mistake this show's pioneering work in utopian conflict resolution for a *lack* of conflict because they lack the media literacy necessary to understand there's a difference (not even getting into the fact you can perfectly well have plot without any sort of conflict at all), this is what makes Star Trek: The Next Generation so incredibly difficult to write for and I think that's what happened here. 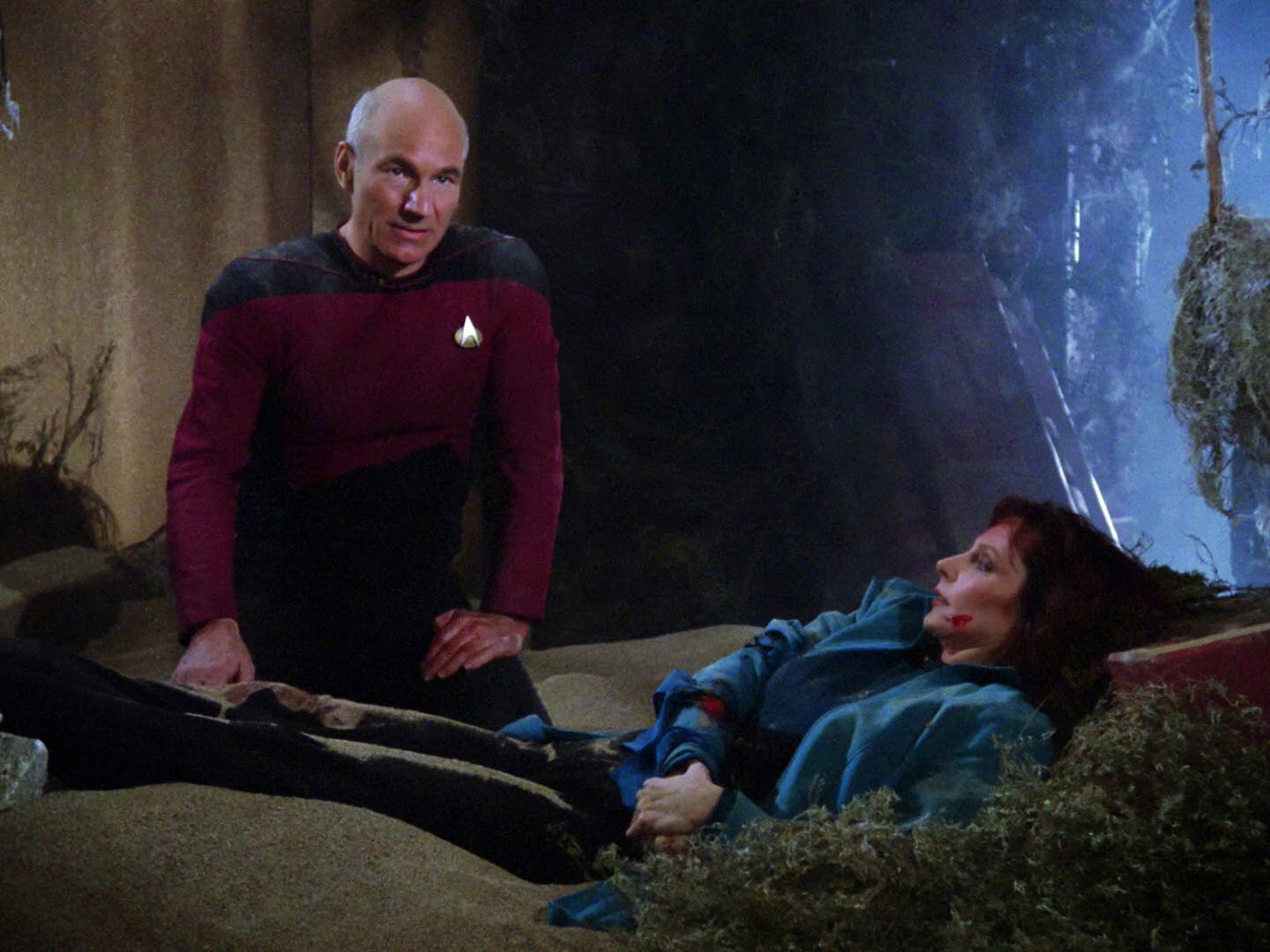 Because the subplot as Hurley rewrote it is lovely: There isn't a passionate, bombastic, angst-ridden declaration of love between Captain Picard and Doctor Crusher, no, but instead we get several wonderful scenes of two characters forced together through an emergency who keep themselves going by talking and getting to know each other a little better. It's not voyeuristic or melodramatically cinematic, but it makes these people feel likeable, amiable, relatable and *alive*. And I think that's better. There's something to be said here for subtext: A whole lot of information about character interactions and backgrounds can be delivered through mediums that aren't plot or dialog and can quietly do their thing for the audience without making themselves the focal point of the story. Kei and Yuri's relationship, for example, is conveyed purely through the way the girls act around each other. We don't need an entire episode to infodump about that; that would just slow them down and annoy them. You can have occasional drabbles and vignettes that explore this sort of thing in more detail, but that really is the best place for this kind of material. Stories purely about character interiority don't really work in settings like Dirty Pair and Star Trek: The Next Generation, and I prefer both series when they avoid it.


(There's also the small matter that Roddenberry obviously wrote Captain Picard and Doctor Crusher's “romance” as a joke. I'm going to come right out and say this kinda torpedoes this ship for me from the beginning, again without touching on the uncomfortable age gap between Patrick Stewart and Gates McFadden. Future creative teams will try heroically to make it work, but none of them succeed as far as I'm concerned.) But Captain Picard and Doctor Crusher are only one third of “The Arsenal of Freedom”, and the rest of the episode is every bit as delightful and it all comes together in a really impressive package. This is quite simply the very best ensemble show the series has done yet: Every single character has a major part to play and each of their actors leaps right at the opportunity and deliver what might be their most memorable performances of the year. You have, of course, Beverly and Picard underground, but on Minos' surface, you have Tasha Yar, Commander Riker and Data trying to solve the mystery of the Erselrope wars all while trying to outmanoeuvre and out-think the deadly Echo Papa 607. Their banter is top-notch, especially between Tasha and Riker: Denise Crosby and Jonathan Frakes have by now settled into their rapport and quick-witted repartee that's so memorable and iconic to them during this period. Denise in particular is an absolute joy to watch: She has more material to work with here than I think she's *ever* had before, and Tasha Yar for the first time truly feels like a competent colleague and lively friend. She's sparkly, snarky and delightful: This is her best episode yet by far. 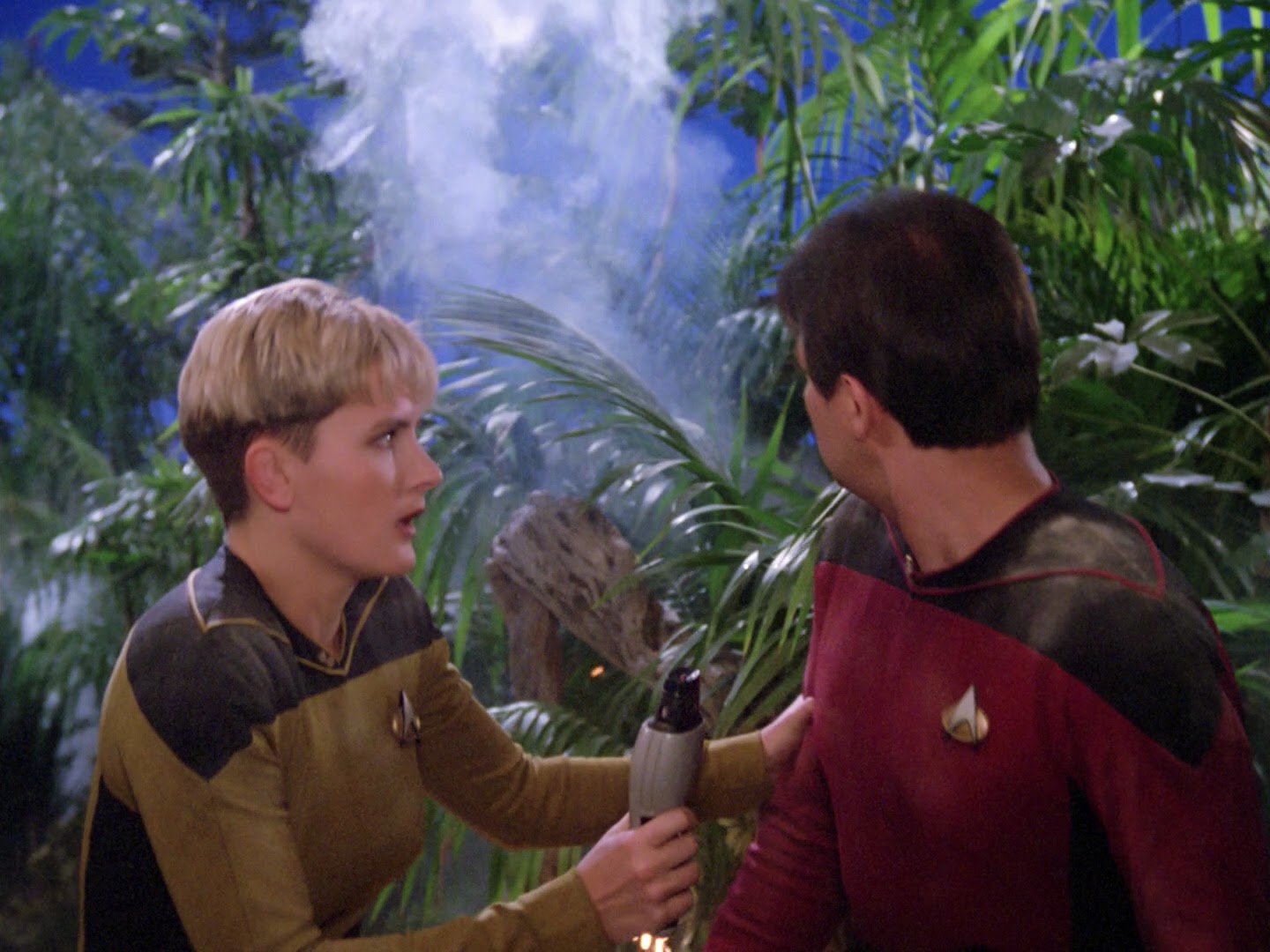 And on the Enterprise is, of course, Geordi, left in command to face down a relentless enemy they can't see and can't hit. I can't say this is the moment LeVar Burton comes into his own (that was the opening shot of Reading Rainbow in 1983 and he's just been patiently waiting for the rest of us to catch up ever since), but he has a staggering amount of room to play here and he unarguably steals the show with an absolutely rousing and triumphant performance. In fact, he's so good the only concern I could raise is that it's difficult to believe someone this mesmerizingly commanding is supposed to be a *junior* officer. And the rest of the remaining bridge crew is outstanding too: Michael Dorn builds off of Worf's development last time by effortlessly selling his frustration with Echo Papa 607, sounding a lot more like the character we remember. And Marina Sirits is as good as ever, Troi getting to diegetically reinforce what we already knew: That Geordi is an inspirational friend and mentor to his crewmates; the heart and soul of the Enterprise. Frankly, it's now only a matter of time before he makes his way up in the world. 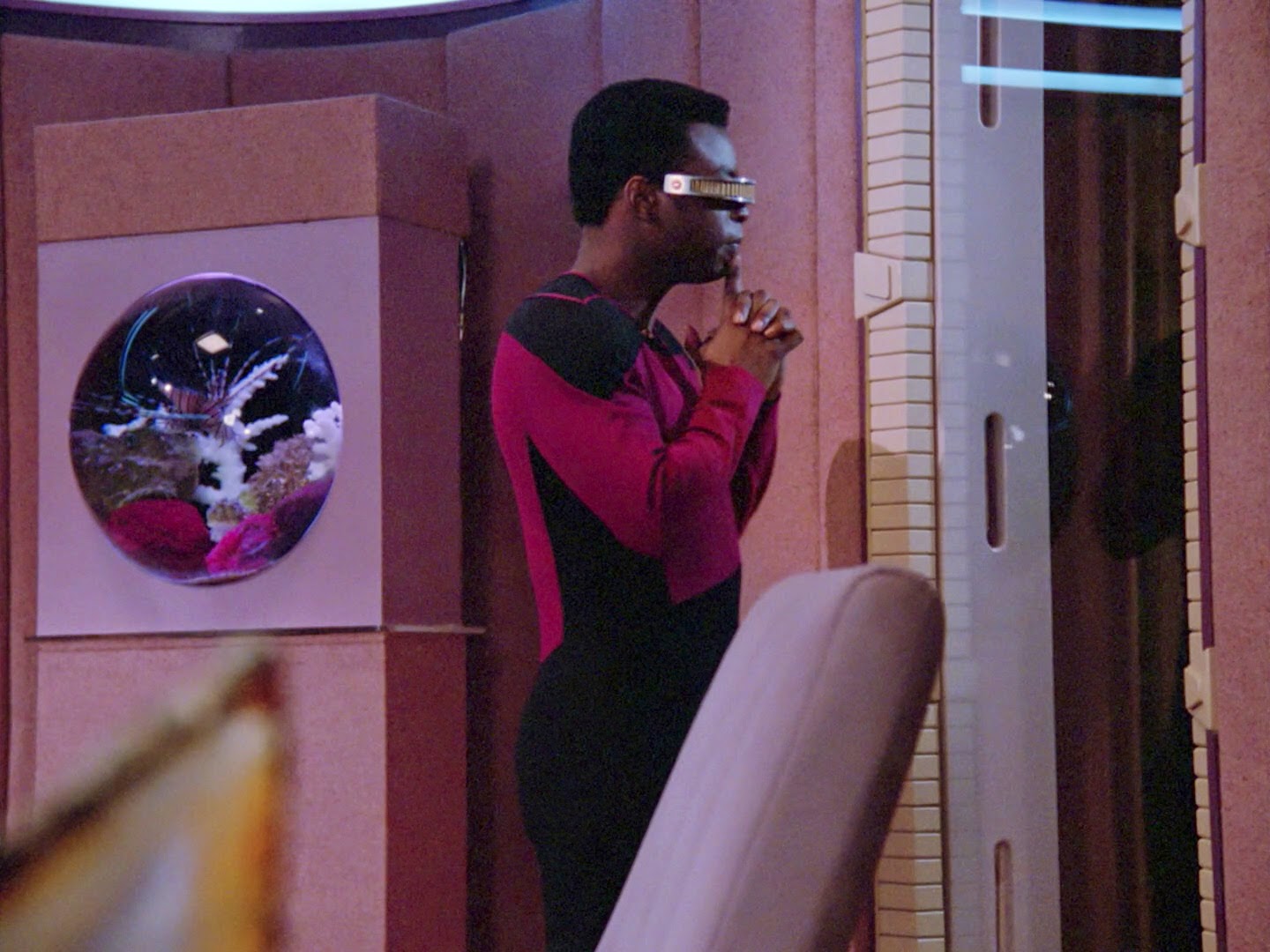 But that scene works on more than one level, because it allows Geordi to vocalize his own emotions an uncertainties. And LeVar knocks it out of the park: As a children's educator, he intimately understands the value of communication, openness and sincerity, and he uses his scene with Marina as an opportunity to convey that to us. Geordi knows he has the ship's collective spirit looking up to him, but he also knows his own feelings are important and that Deanna is the person to talk to about that. And Marina is, as always, very knowing, supportive and reassuring. In fact, it's such a lovely moment I find it a bit jarring when we don't see Deanna again after that, especially since Gene Roddenberry gave her a spot on the battle bridge in “Encounter at Farpoint”. You would think she'd want to stay by Geordi's side to make sure he has all the support he needs during the final battle. Personally, I'd like to think she was indeed on the stardrive section keeping a watch over the rest of the skeleton crew. 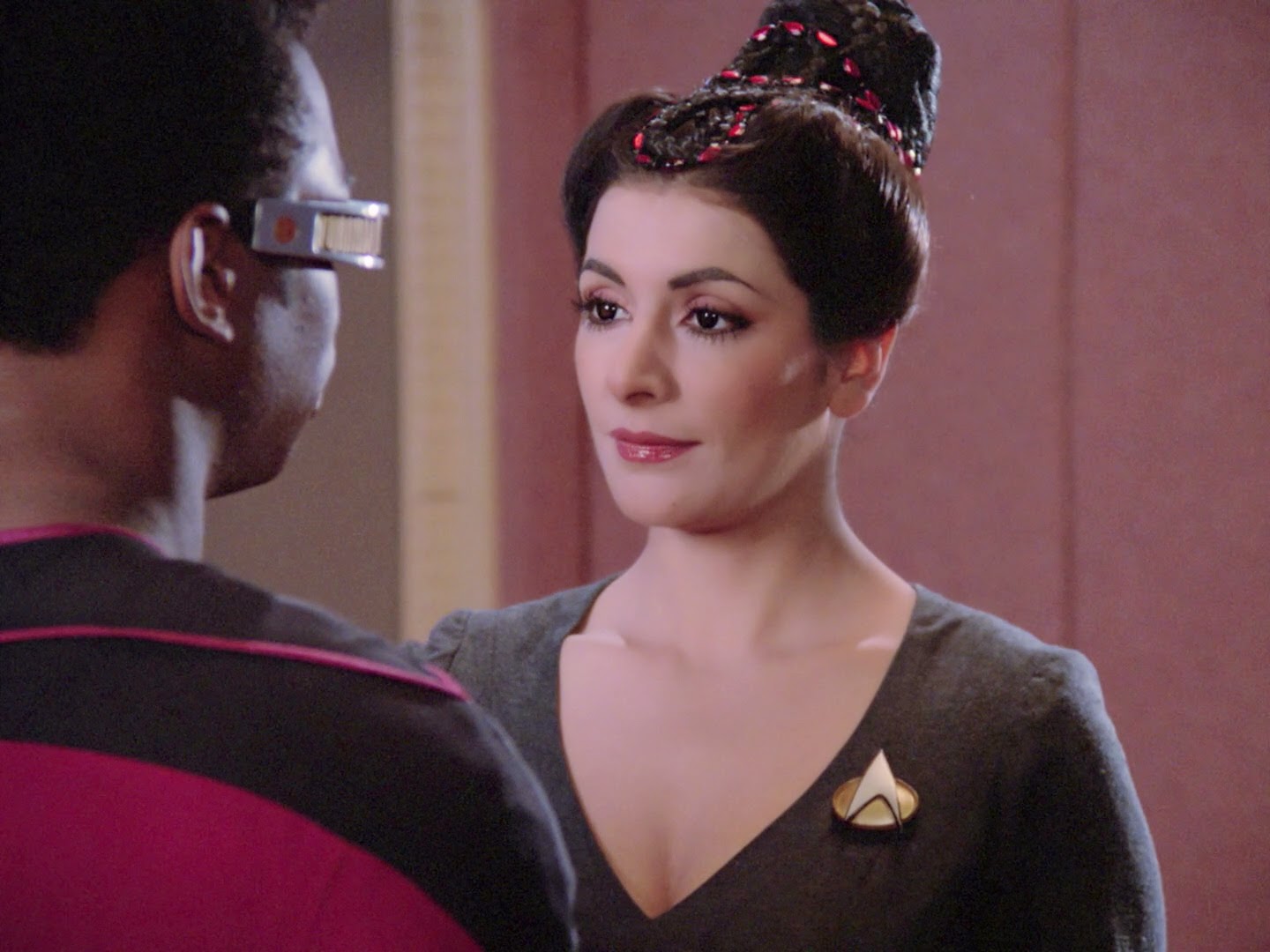 As great as the individual subplots and performances are, it's the overarching plot that most clearly demonstrates how bold and energized the show is now. Because “The Arsenal of Freedom” is basically Star Trek: The Next Generation doing The Hitchhiker's Guide to the Galaxy. The central conceit, a society so built around an arms deal bubble they wind up vaporizing themselves with their own product, is nothing special (there's even a Star Trek Phase II story with a similar idea), but the execution is right out of Douglas Adams: What glimpses we get of Minos reveal a society not only organised around gun running, but exaggerated to such an extent they can broadcast interplanetary weapon system infomercials complete with holographic late-night TV salespeople. Minos is the Sirius Cybernetics Corporation if they dealt in weapons of mass destruction. And the way the Enterprise crew reacts to the salesman (played with pitch-perfect schmaltz by Vincent Schiavelli) is a brilliant mix of horror, bewilderment and bemusement. 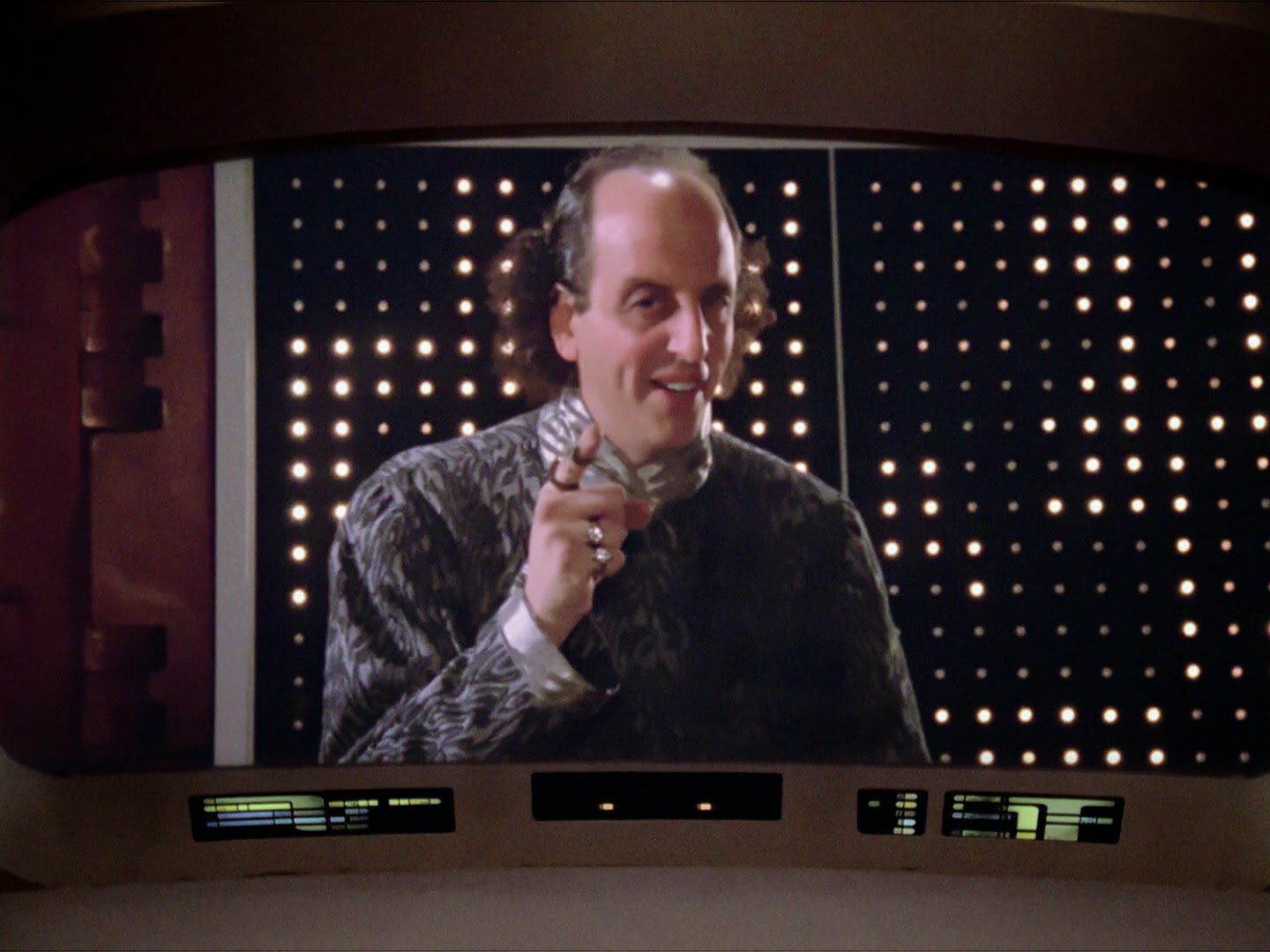 “The Arsenal of Freedom” isn't quite batting at Adams' madcap levels yet, of course: It's considerably more straightforward than anything in Hitchhiker's Guide or Dirk Gently. But it needs to be seen as what it self evidently was supposed to be: A first attempt. A test of the waters to see if this is the sort of story Star Trek: The Next Generation can and should do. And the answer is a resounding yes on all counts-The only real negative thing you can say about this episode is that neither the show nor the franchise ever really picks up this thread again, when it absolutely could have and with flying colours. As it stands, there is simply no other point in Star Trek: The Next Generation, or Star Trek on the whole, where one could expect to see a Douglas Adams-esque sardonic skewering of the military-industrial complex and runaway extreme capitalism. And that's as much a shame as it is a testament to Star Trek: The Next Generation's unique and beguiling first season. 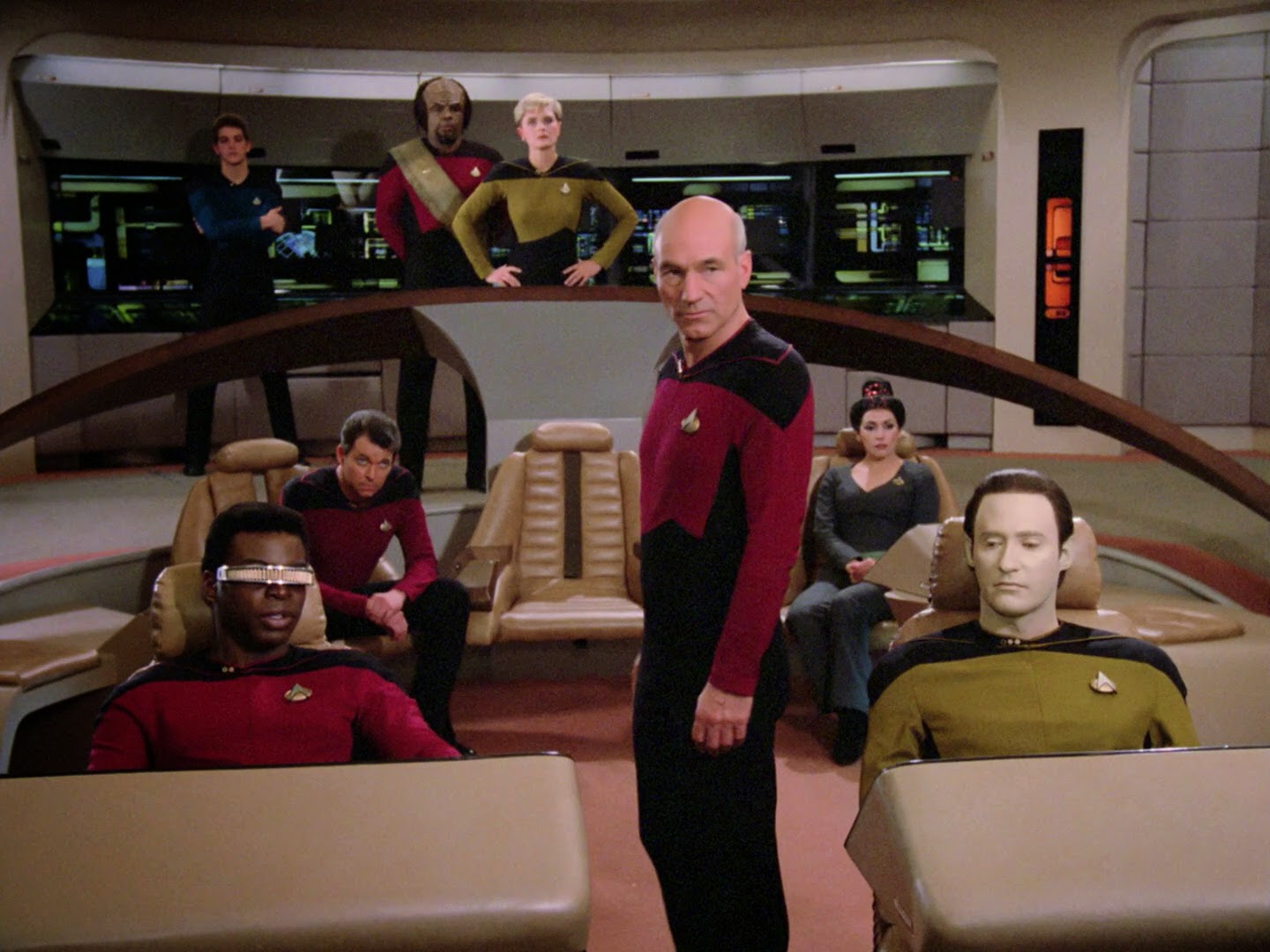