“...the issue at stake is patriotism”: Too Short a Season 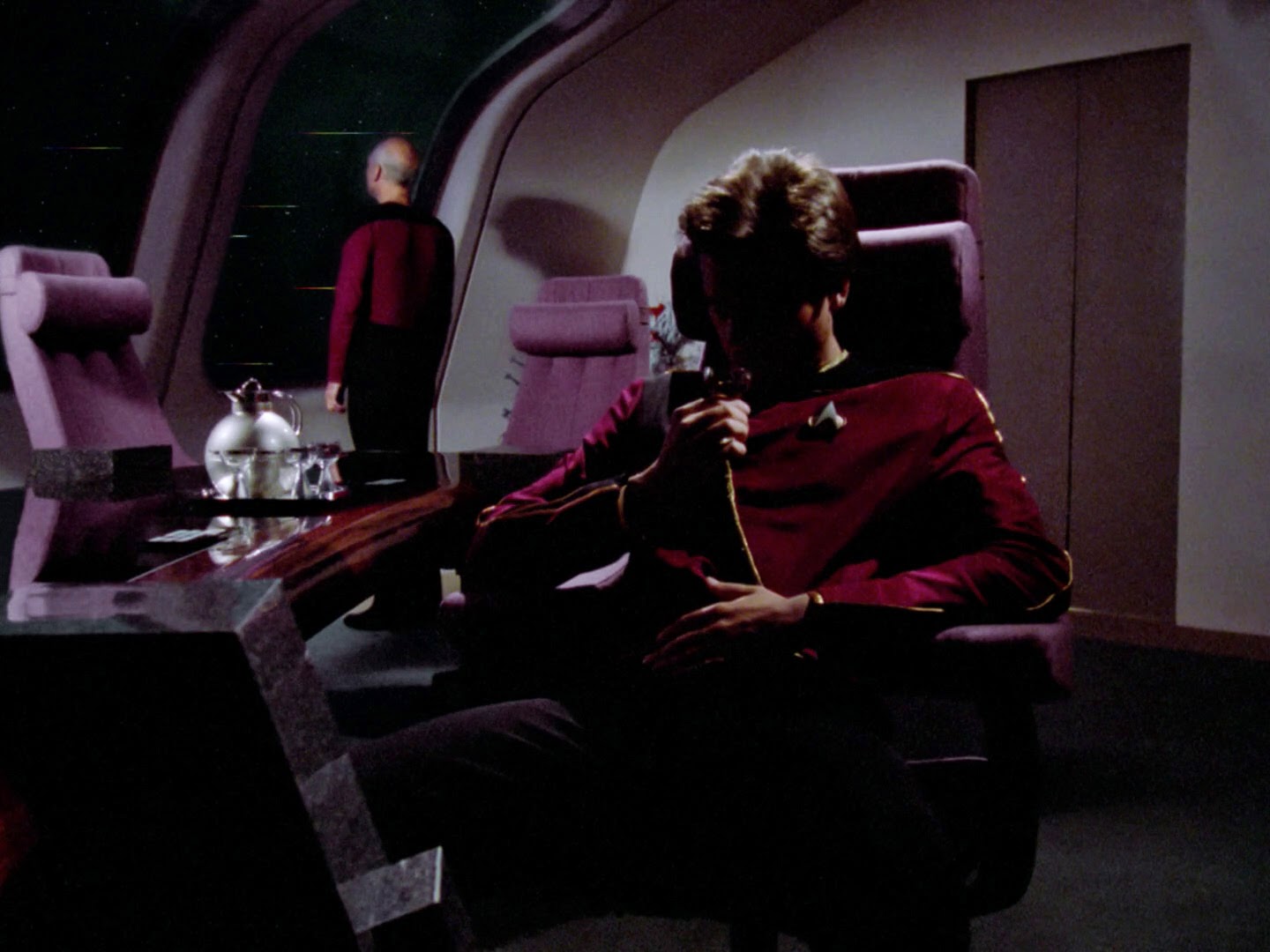 “Too Short a Season” is one of the most criminally underrated episodes in Star Trek: The Next Generation's first year, if not the whole series. It's the first unabashedly, hands-down brilliant episode since “Haven”, which makes sense as it's the show's second contribution from D.C. Fontana. Well, second *official*, at any rate: She did the teleplay for “Lonely Among Us”, which I also loved, and she did clean-up work on “The Naked Now”, but understandably took her name off it and used a pseudonym there. Though “Too Short a Season” is still an adaptation of somebody else's work, it's still very much a story that's very recognisably hers: It's got every ounce of that trademark Fontana bite and cynicism and, as we'd expect, it's a story where the real villains are the Federation. In fact, it's the first story like that in the entire franchise.

I seem to recall once either reading or hearing a rumour that the role of Admiral Mark Jameson was written with Captain Kirk in mind. Now, I can't substantiate this anywhere and have no idea where I might have initially picked that up, so I could very well be imagining things, but after having just rewatched “Too Short a Season” in lieu of the critique I gave the Original Series it seems truly uncanny to think about. Because one level on which to read this episode is as a very firm reaction against the sort of ethics that permeated *huge swaths* of the Original Series, especially under Gene Roddenberry. Jameson is not an obsequious pencil-pusher, like previous obstructive Starfleet admirals have been. He's not some incompetent desk jockey removed from the “real” action on the front lines, he's every bit the unorthodox renegade and rogue Kirk is. In fact, “Too Short a Season” almost seems like a flat rejection of “A Private Little War”, for what Jameson does here is almost the exact same thing Kirk did in that episode, only while the narrative lionized Kirk, it condemns Jameson.

(That Jameson is destined to fall from grace is made obvious fairly early on: Not just in the way the teaser emphasizes his impulsive commandeering of the mission, but thanks to Marina Sirtis. “Too Short a Season” is an excellent showcase for her theatre-honed expressiveness: When Jameson is first speaking to Karnas on the bridge, the camera keeps cutting to Deanna Troi, and Marina goes out of her way to telegraph his ulterior motives to us purely through her facial expressions: Marina plays Troi as if she can sense Jameson's deceit and ambition right from the outset. Granted, I suppose this raises the question of why she wouldn't have expressed her concerns to Captain Picard, but it's Marina Sirtis' considerable acting prowess that's primarily responsible for getting us to think her character might be under-served in the first place.)

The entire reason there's a hostage crisis in the first place stems directly from Jameson's actions negotiating for the resolution of a similar situation forty years prior. Karnas demanded Starfleet weapons so he could crush his enemies and Jameson “interpreted” the Prime Directive by giving them to all sides of the conflict, plunging the planet into a brutal, decades-long world war that took the lives of thousands. Karnas wants Jameson to return and see the aftereffects of the devastation he wrought, which was inconceivable. It really is difficult to avoid the parallels to “A Private Little War” here, where Kirk responded to the Klingons feeding weapons technology to one warring faction by giving Federation weapons technology to the other. The childishly po-faced overtures to the Garden of Eden and jaw-dropping racism in that episode aside (they were both intolerable signatures of the Original Series on the whole anyway), Gene Roddenberry genuinely seemed to think Kirk did the noble thing here at the time, resulting one one of the original Star Trek's most unquestionably morally bankrupt hours. That “Too Short a Season” paints a similar scenario as Admiral Jameson's downfall is crucial to take note of, because it marks a genuine turning point for Star Trek as a franchise.

Not only is Star Trek: The Next Generation out-and-out rejecting the very same ham-fisted cowboy film ethics its predecessor reveled in, it's evidence that just as Star Trek itself has learned from its mistakes, so has Gene Roddenberry. Because even though he's beginning to delegate more and more responsibility to producers Maurice Hurley and Rick Berman, Roddenberry is still very much the showrunner for the moment, and he would have had the final say on whether or not a story made it to screen or not. And that he allowed something so openly hostile towards viewpoints he previously held is telling, and laudable, as it's another sign both he and his franchise are still striving to improve. Perhaps that's why the rest of this story concerns Jameson's reckless and irresponsible pursuit of an anti-aging drug, and why Captain Picard and Commander Riker muse at the end about the nature of age and wisdom. Star Trek: The Next Generation is saying it's grown up now, and impulsive, foolhardy mistakes like the ones that characterized Admiral Jameson's career are the mark of the young.

Not youthful, per se, but young: After all, the Enterprise bridge crew is comprised of a fair number of people 30 and under, and Star Trek: The Next Generation must know its future will be decided by the youth culture of the Long 1980s. But there's a significant difference between being chronologically young and young minded, and indeed one can be young in different ways. What I think “Too Short a Season” is critiquing is the brash, self-assured hotheadedness of youth, vices that I think could also be argued to characterize a lot of hegemony. Even before he started taking the drug, Jameson was a “young soul”: Naive and thoughtless. He remained that way to his dying day, and it hurt people. It hurt Karnas, it hurt his people, it hurt his colleagues and it hurt his wife. People that self-absorbed and masculine don't comprehend the damage their actions cause to others. They're simply incapable of understanding because they blind themselves to the rest of the universe. Though the Enterprise has the spirit of youth in that it is unceasingly restless, it's also marked by wisdom and experience, which means it's struck just about the perfect balance any person can strive for in life.

(Indeed, one person who could also be called both young and wise is D.C. Fontana. She's always been this way, it's just that this is the first time the rest of Star Trek is beginning to catch up with where she's always been. Fontana has never been a fan of Federation authority and power structures, and its incredibly validating to finally see her ideas start to be realised and vindicated. That Roddenberry is starting to finally listen to her is evidence of his own growing wisdom.)

But “Too Short a Season” is not just about Star Trek's interiority. As much as it calls to mind “A Private Little War”, it's also tellingly reminiscent of the Iran-Contra Scandal (indeed, it's explicitly based on it), which means it's perfectly of its time as well. My more perceptive readers might recall that throwing the Iran-Contra Scandal at the Enterprise was Q's opening argument in his prosecution of the crew in “Encounter at Farpoint”, so having it show up again here is rather significant. This has two major repercussions: Firstly, it refutes Picard's early argument that the 24th Century is more enlightened and advanced, because clearly the Federation is not above engaging in the same destructive, selfish corruption that 20th Century empires did (which is in hindsight rather obvious, as, being a federation it's by default a hegemonic and imperialist power structure itself).

But secondly, and more importantly, it shifts the series' utopian rhetoric away from the Federation to the Enterprise *itself*, which is quite possibly the single most important move in the history of the franchise. The Federation may now be diegetically tainted, but the Enterprise crew gets to show how they have a more idealistic, constructive and...adult approach to problem solving. Captain Picard no longer speaks for all of humanity or the Federation, he now just speaks for himself and his crew. By recreating Q's challenge in microcosm and detourning its rehtoric, Picard and the Enterprise manage to salvage their utopianism while shedding the more distasteful top-down and teleological aspects of it. This one story sets the groundwork for the entire future of the Star Trek franchise and lays a blueprint for how it can stay true to its ideals, thus proving it's worthy to become symbolic avatars of them for us to look up to. Pretty much all future Star Trek will be judged on how well (or not) it handles this brief, and “Too Short a Season” really ought to be seen as the moment where all that is put into place.