“Even when all the worlds have frozen or exploded”: The Neutral Zone 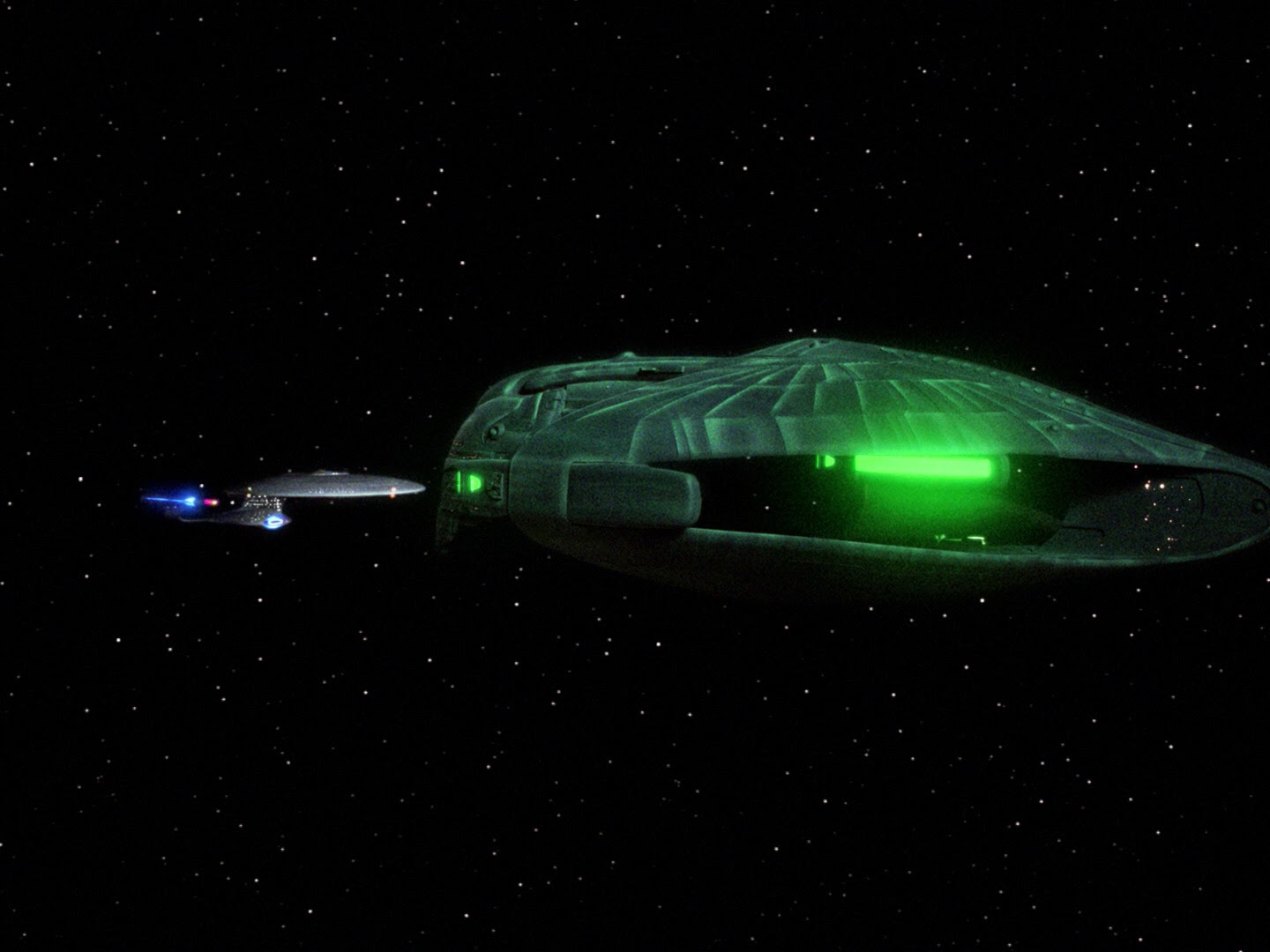 Let's address the obvious things first. Yes, “The Neutral Zone” rehashes key elements from both “Space Seed” and “Balance of Terror”. Yes, the Romulans as depicted in this episode bear no relation whatsoever to the way they were portrayed in the Original Series, in essence throwing all the interesting commentary and contrast they bring with them out an airlock. Yes, those bases were indeed meant to be destroyed as part of a story arc to introduce the Borg that gets promptly forgotten about as soon as this episode airs. And yes, the motivations of the main cast are seriously wonky and out of character such that characterization of people like Picard and Riker waffles back and forth bafflingly from scene to scene. This is all self-evident and indisputable. There, is, however, a pretty simple explanation for all of it that can't just be laid at the creative team.

If you guessed it's the Writer's Guild strike, well, good for you! You're getting good at this. I'm afraid you don't win anything, though.

“The Neutral Zone” is basically a first draft spec script. The reason it is a first draft spec script is because it was the only thing the team had lying around to put into production to close out the year, and essentially nobody was allowed to actually revise it so it would, you know, make sense and be coherent. Every single fault the finished product has can straightforwardly be pinned on this, and to single out “The Neutral Zone” in particular for blame seems a bit unfair to me, not only given how sketchy things are going to get next year, but also due to the altogether reasonable defense that, through such gems as “The Naked Now”, “Code of Honor”, “Angel One” and “Skin of Evil”, this team has demonstrated itself to be perfectly capable of screwing up *without* an industry-wide Writer's Guild strike to slow them down further. But also because, in spite of everything, “The Neutral Zone” really does work and contributes quite a lot to the unfolding text of Star Trek: The Next Generation.

The Romulans are, of course, a problem. After D.C. Fontana and others spent the better part (and I mean that quite emphatically in several senses) of the Original Series trying to make them a social parallel of the Federation, in some sense a people more cultured and sophisticated than us, “The Neutral Zone” basically undoes all of that in one fell swoop by making them an entire species of Dick Dastardlys. This does not, it should be noted, doom the Star Trek: The Next Generation Romulans for good: Future stories set in this continuity will make impressive strides with them and redeem this early tactical blunder by essentially depicting them as a fractured and splintered figurehead empire in decline...which actually *does* build off some themes from the Original Series, though they're back to mustache-twirling by the Dominion War. But the fact does remain they certainly don't work all that well *here*. Well, when I say that I of course mean except for the Romulan Warbird, which is predictably a breathtaking, awe-inspiring masterpiece of design and one of my favourite bits of Star Trek: The Next Generation iconography. 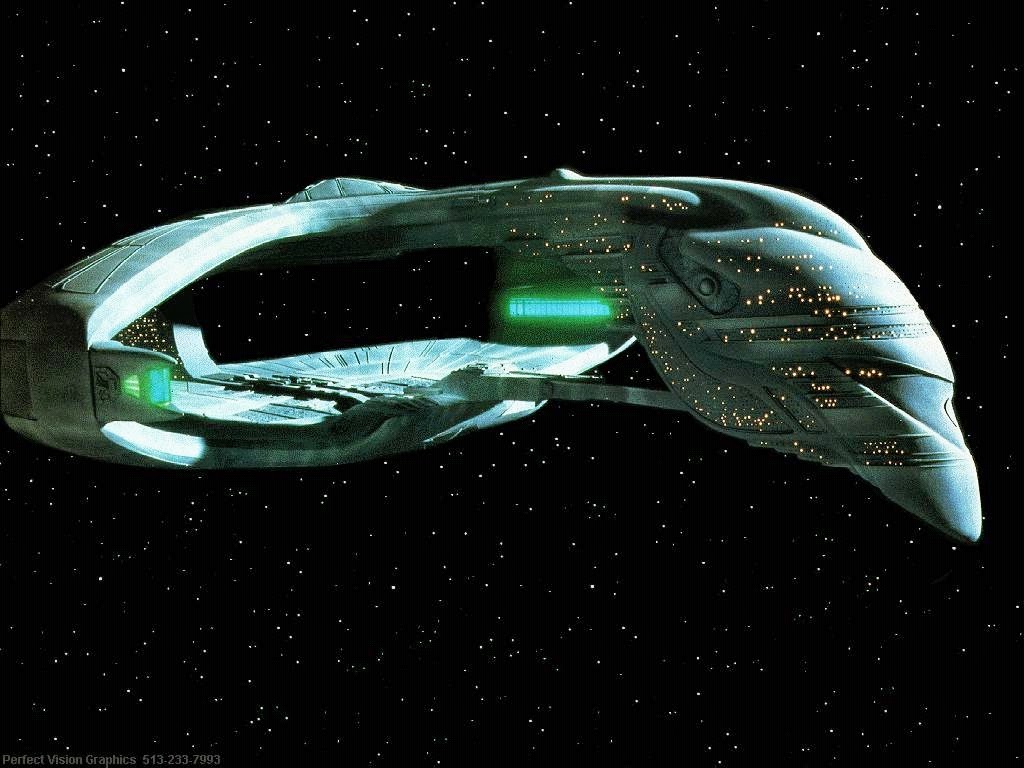 This is the third of Andy Probert's three starship designs for Star Trek: The Next Generation, and it's every bit as lovely and powerful as the Ferengi Marauder and the Enterprise itself. On this ship I'm struck by the contrasting vertical and horizontal elements: That forward section always brought to my mind a mesmerizingly alien stylized tower of sorts, and I love how it's mirrored by the “tail feathers” at the back. I find myself once again captivated by all the little windows that project such an awesome sense of scale onto the ship, and once again I have to speculate what it looks like on the inside. For some reason I get a very grungy, utilitarian feel from Romulan technology and design, perhaps appropriately akin to old-style Soviet engineering. If the Bird-of-Prey was like a submarine, the Warbird reminds me of Soviet nuclear icebreakers, and I can imagine that “tail feather” section comprised of dingy engine rooms and oxidized maintenance decks. So there you have the three great Probert starships: The Enterprise is a research vessel with all the accommodations of a futuristic night club, the Ferengi Marauder is a floating Manhattan high-rise and the Romulan Warbird is the NS Арктика writ large.

Perhaps unexpectedly, it's the B-plot (or C-plot I guess if you still want to count the Borg stuff) of “The Neutral Zone” that's the most interesting. With Clare, Sonny and Offenhouse, we get our first, and potentially still strongest, commentary on Star Trek: The Next Generation's relationship with the present day. This is the episode that most solidifies the show's commitment to post-scarcity themes: The 24th Century is described numerous times, and in great detail, as being a time when material wants and needs no longer exist, all debilitating diseases have been accounted for, people can literally be brought back from the dead (unless they're Tasha Yar, natch) money (and therefore capitalism) has been abandoned as youthful shortsightedness and, tacitly, every person is free to pursue their own calling without fear of oppression and reproach.We also get the first concrete date in Star Trek history: 2364, from which the entirety of canon Star Trek chronology is derived. Indeed before this, the understanding was that Star Trek: The Next Generation took place in the very early 24th Century, perhaps not as far removed from the 23rd Century of the Original Series story as we had assumed.

This is a series of bombshell revelations. The chronology stuff alone is worth an essay unto itself, but my readers are likely most interested in the post-scarcity concepts. What we get with “The Neutral Zone” is Star Trek: The Next Generation's first defining stab at its diegetic utopianism, and it's very clearly making the argument this is the sort of environment we should be striving for. Not necessarily in the grandiose politicizing sense: The show has long since divorced its ideological utopianism from its world-building, even if Gene Roddenberry hasn't, and its problematization of the Federation is only just beginning. Also interesting to note is that even though “The Neutral Zone” cribs some key plot points from “Space Seed”, it's also expressly distinct from it in a number of important respects. Namely, while the show pays lip service to the established history of the Star Trek universe circa the 1980s and 1990s here, Sonny, Clare and Offenhouse are very clearly meant to be people like us. People from the *real* 1980s and 1990s, not the pretend Star Trek one with the Eugenics Wars and all that. And though the show is skeptical of us across the board, it does provide three contrasting representative viewpoints for us.

Clare stands for uncertainty in the face of massive change and upheaval. She shuts down once she begins to process how everything she knew about her world and how it worked no longer applies, but she's helped in coming to terms with that by Deanna. Offenhouse meanwhile is deliberately a reactionary, and thinks he can force the 24th Century to conform to his Will and his belief systems. Naturally, he's a high-powered business magnate concerned with stocks and investments who uses terms like “upwardly mobile” and is obsessed by power. But he's not shown to be an out-and-out villain either, as is demonstrated in the scene on the bridge during the climax where he calls Tebok's bluff. He does have talents that are still valid, he just needs to come to understand he has to remove them from the blinkered and toxic context he's used to viewing them through. And tellingly it's Sonny, the musician, who doesn't have any sort of trouble at all adjusting to his new life. Artists are a kind of shaman for modern ages, and they're frequently the sorts of people most readily able to accept new realities and new ways of thinking. Sonny goes with the flow, as he says as much.

The biggest and most common objection to the Star Trek: The Next Generation model of post-scarcity as it manifests here is a standard Marxist emphasis on material cycles of production. If, the argument goes (and I'm simplifying considerably here), the 24th Century is a purely post-scarcity environment where material needs no longer exist, then why does anybody work? What's the point of the Enterprise boldly going out to study and make contact with new people and new ways of thought if they're not being paid? What motivates them? Why doesn't everyone just sit around on Earth like futuristic lotus-eaters lounging by the food replicators? Bemusingly, to me at least, this is essentially the same question Offenhouse levels at Captain Picard when he asks “What's the challenge?”. Picard has a ready-made response that speaks volumes about where this show is trying to place its idealism, but also about how little fans actually pay attention to their favourite show's philosophy:

“The challenge, Mister Offenhouse, is to improve yourself. To enrich yourself. Enjoy it.”

Why does the Enterprise crew do what they do? Quite simply, because they want to. Because they need to. Because they have an unquenchable thirst to travel, to explore, to learn and to grow. To become better people day after day. Wanderlust is a formative and irreducible part of their being. There may well be people content to stay put on Earth and revel in the lifestyle the 24th Century affords them (the series bible even specifies as much), but those people aren't on the Enterprise. Granted, this doesn't explain why Starfleet works according to antiquated Earth military structure, but that's the fault of Gene Roddenberry and has been a problem with Star Trek since 1964 and isn't something we can level purely at the current creative team.

A year into its journey, does Star Trek: The Next Generation have the right to play Q like this? Perhaps, perhaps not. As touching and inspiring as Captain Picard's final speech about the need to “go forward” and how there's “still so much to learn” may be, I still can't help but cast my eyes above him, sense the conspicuous absence at the tactical console and feel that Captain Picard might just be getting ahead of himself and taking things a bit too much in stride. But maybe “The Neutral Zone” is in some way an evocation of its own themes: Star Trek: The Next Generation is far from perfect, and it knows this. But it's in a better position now than it was when it began last September, and it also knows all it can do is keep striving to grow along the way.
Posted by Unknown at 11:00 PM