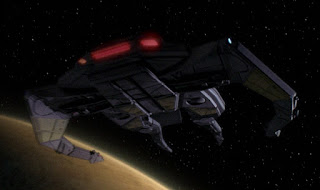 I suppose it's worth pointing out the possible significance in the fact that the first few acts of “Gambit” chronicle the crew's search for Captain Picard, missing and presumed murdered, and their efforts to discover the identity of his would-be killer and bring them to justice. I will still stubbornly maintain that Star Trek: The Next Generation can't live without Captain Picard, and the symbolism behind a plot twist like this to me seems obvious. A Star Trek: The Next Generation without anyone would be unthinkable, but especially him, the public face of the series to millions. The only other character whose death would be more openly and visibly catastrophic to the show's continued existence would be the Enterprise itself.

Ironic then how “Gambit, Part I” is the moment where this season finally gets its act together and stops faffing around. Not that this show has ever been terrific at season openers, mind, but the one-two punch of “Liasons” and “Interface” was excruciating in a way we've really not seen in six or seven years. This is a story I've always remembered as a highlight of this year ever since I saw it as part of TNN's reruns (I might have seen it when it aired as well, but I don't have strong memories of it from that time period), and I was perhaps understandably relieved to see that it's essentially as good as I thought it was. My favourite scene is the teaser, with the crew undercover at a seedy alien bar: They naturally play their parts perfectly, and, as counterintutive as it perhaps might seem, it really feels like they belong in an environment like this (more on that later). That's another thing I remember vividly from this run of stories: Dank extraterrestrial dives with dark mood lighting, abrasive characters and a lot of grates and sheet metal (except for the one time it was a cramped bar with a lot of bright, gold colours). In hindsight, it was probably the influence and cross-pollination from Star Trek: Deep Space Nine.

Of course Captain Picard's not really dead, and from there we move to what is in my opinion a positively delightful adventure mystery story. It probably tells you all you need to know that this is a two-parter both the fans and writers alike have a rather negative take on: Even Brannon Braga, who talks sense more often than not, says that “Gambit” is of a genre that's “not usually taken seriously” and that it's beneath the show to do an episode like this. He's also of the mind that it was a bad call to open up with the whodunnit cliffhanger, because audiences were never going to buy that the captain was really dead. Which, to be frank, just displays a startling lapse in media literacy and a lack of understanding about how cliffhangers and dramatic tension are actually supposed to work. There was also the concern that there would be an issue with the fact that “Gambit” is a space pirate story, and apparently Gene Roddenberry didn't want any space pirate stories. For some reason.

I will grant Roddenberry this though: It doesn't *really* make sense for pirates to exist in a post-scarcity universe. Piracy, like all reactions to the commodification of nature and human labour, probably shouldn't exist in the same universe as replicators. That said, we've made excuses for forms of capitalism existing into Star Trek's future before: The Ferengi and the Yridians, for example (one of whom plays a role in this episode, as a matter of fact) can be read as playing a sort of game with each other in order to keep an environment of scarcity running amongst themselves. They pretend gold-pressed latinum and information has value, because if it doesn't the foundations of their societies collapse. Ultimately, the existence of such staunch capitalists in a universe like Star Trek's actually serves to reinforce how ridiculous, artificial and unnatural capitalism is by giving it even less reason to exist than it does in the real world. The same goes for imperialism (or at least it should), because the major galactic powers are clearly not fighting over resources, but over prestige and power.

But as far as I'm concerned, none of this is a problem in the finished product whatsoever. In our cultural lexicon, pirates mean more than just a bottom-up reaction against (sometimes literal) wage slavery, and that's what “Gambit” is really about. “The Chase” did a similar adventure archeology mystery plot last season to wild success, and “Gambit” is just that stretched over two episodes with a lot of delightfully fun misdirection and reverse psychology a la a slightly campier “Face of the Enemy”. It's exciting to watch Captain Picard, Commander Riker and Data all try to think around each other and anticipate each other's moves so as not to put the undercover operation with the pirates or their safety in jeopardy. Pulling it off requires them all to have an absolutely peerless level of intimacy with each other, so this is a really fitting test to give to this crew, especially at this stage in their career. It's especially noticeable and interesting with Data, who is forced to apply everything he's learned about human(oid) behaviour and culture in order to ensure he doesn't let the Enterprise down during his first real stint as acting captain.

(Just to speak briefly on the two-part structure itself: Coming so soon after “Descent”, and contemporaneous with “The Homecoming”/“The Circle”/“The Siege”, this is the moment where Star Trek: The Next Generation and Star Trek: Deep Space Nine finally demonstrate that in a *material* sense they've grown beyond the boundaries of their medium. No longer reserved for season finales/premiers, the two-, even three-parter is now a casual, semi-regular occurrence. What this means is that the show has grown confidant enough to tell stories on its own terms and at its own pace instead of being restricted by the conventions of broadcast television.)

There are still some lingering problems, though. For one, it's a bit annoying that it is once again Captain Picard, Commander Riker and Data who get the majority of the interesting dramatic and strategic stuff. Doctor Crusher gets one scene in the teaser and then never appears again, and, most egregiously, Deanna Troi is reduced to spouting hollow, tin-eared expository dialog when really she ought to be the one doing most of the heavy tactical and psychological lifting. The scene that sticks out to me the most is the climactic bit where Commander Riker remotely inputs his access codes from the pirate ship, and Deanna is completely at a loss as to what he might be planning. She of all people should be the first person to figure it out for no other reason then the fact she can read minds. Instead, it's Data. A lot of the dialog in this episode in general feels a bit wooden and stilted in that very classical Hard SF way: Everything naturalistic has to come to a screeching halt, shattering immersion in the process, so the characters can recite a journal article on how the universe du jour works.

Also, another thing that bugs me is that for a story about space pirates, these guys really suck at being pirates. Captain Picard is absolutely right when he tells Tallera that Baran is a poor captain because he relies on fear and intimidation. Ruthless though they might have been, pirate ships were famously democratic and egalitarian institutions for their time, and it was most certainly a better career move (from both a financial and safety perspective) for a sailor to sign up with a pirate ship than to enlist in the navy or merchant marine. The captain needed to engender trust, and the crew were well within their rights to dispose of him or her (yes her: Women could be pirate captains before they could be much of anything else in modernity) if they no longer felt the captain was deserving of that trust. But I think that's actually part of the critique the episode is making, and that's the reason for Jean-Luc's speech being here in the first place. This is, after all, what he begins to suggest to Tallera when they meet in the cargo bay.

Of course this line of thought, as well as Captain Picard's rather brilliant recursive performance as Galen, just makes me really want to see a Star Trek: The Next Generation AU where the Enterprise crew are a bunch of outlaw space pirates who get their kicks fucking with the big galactic imperial powers. If there's one thing this episode proves, its that this crew is way more interesting and fun as renegades, and hell, it's even been done before: This was basically the “bad future” John de Lancie gave the crew in the anti-time future of “The Gift” where fascist Claude Picard turned the Federation into (even more of) a reactionary xenophobic counter-revolutionary state. But is it bad that this is a status quo I'd actually love to see?