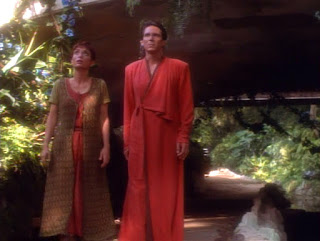 There are two Circles that give their name to the title of this episode. One is, naturally, the xenophobic nativist fascist terrorists we were introduced to last week and who execute their master plan in this episode. But the other is the circle of friends on board Deep Space 9: A major theme in this story arc is demonstrating how close knit and fiercely loyal to one another this team has grown in just the short period of time they've been together: Last time there was Commander Sisko's breezy interactions with Jake, Kira and Dax, O'Brien's dedication to Kira's cause, and Dax's gentle but firm support and guidance.

We also saw another example of the more congenial side of Odo and Quark's relationship in a way we haven't really seen since “Babel”: Yes, they're still trying to outplay one another, but there's a familiarity and respect there. And this carries through to this episode as well-Although the “deputy” subplot is largely played for laughs, Quark still comes to Odo willingly because he's concerned about the Deep Space 9 community being put into danger by The Circle's actions. Furthermore, he goes straight to Commander Sisko in the climax with the crucial information about where Kira is being held and it was, of course, him who gave Kira Li Nalas' earring in the first place, letting her know that he was still alive and where to go to find him.

Kira herself sums it up to Li pretty well by stating that while she may not have wanted this job at first, Deep Space 9 has become a home to her, and her fellow residents have become her friends. We could say much the same for the show itself. And the scene in Kira's quarters near the beginning really drives it all home: It's a routine straight out of a Marx Brothers film (literally, in fact, to the point director Corey Allen had it done all in one take, just like in A Night at the Opera) and captures the unique and distinct personalities of everyone involved perfectly. Kira's arc in this trilogy effectively mirrors that of a presumed audience: She begins in self-imposed isolation away from daily life on Deep Space 9, her loyalties still primarily with Bajor. It's only when confronted with the possibility of being removed from the station, and after suffering through the persistence of the crew, that she begins to realise how much affection she really has for the place and the people. And at the end of the episode, after witnessing the crew risk their lives to save her even though she's no longer one of them, that she fully accepts and understands where she belongs.

Although it at first must seem like a traumatic crisis of faith for Kira, it does help her to find Bajor has betrayed her trust in them. Much of Bajor supports The Circle, who are far more dangerous and powerful than anyone anticipated and, backing by the Cardassians aside, are working in direct opposition to everything Deep Space 9 stands for and that Kira has come to as well. Vedek Winn and Minister Jaro's masterminding alone speaks volumes. This is the final turning point for Kira where she finally picks a side, and explicitly chooses the side of cosmopolitanism. Because there were only ever two ways to go, cosmopolitanism and reactionaryism, and she and Minister Jaro embody both sides of the dichotomy. As Jaro points out, he and Kira effectively stand for the same things, all that's different is the actions they took. As Deanna said: “feelings aren't positive and negative. They simply exist. It's what we do with those feelings that becomes good or bad.”

This also leads into my one grumble with this episode, which is that when Jaro correctly points out that he and Kira hold the same positions and desire change, Kira states “if you want change, vote for it”, which is the absolute pinnacle of elite moderate centrist liberal patronizing platitudes. I mean what he's doing isn't wonderful either, it's Machiavellian power consolidation at its purest, but Jaro is absolutely right to say that change doesn't come through working within the system. It's a frankly cringe-inducing moment that makes Kira look really bad and really weak: I know the Star Trek: Deep Space Nine characters are meant to be fallible in a way the Star Trek: The Next Generation ones aren't in an effort to play up a sense of moral ambiguity but A. I don't like that and B. that's all ultimately irrelevant because the fact remains that the crew are the protagonists and a narrative like this is supposed to implicitly agree with its protagonists. Even the grimmest of grimdark wants us to admire its antiheroes in an adolescently anticonformist way.

But Jaro and Winn's machinations bring another facet of the story to the surface here. Throughout the recent weeks and months Star Trek: The Next Generation and Star Trek: Deep Space Nine have been trying to justify their existence and respective legacies by telling stories pitting themselves against extradiegetic and metafictional threats. And Jaro and Winn are every bit as dangerous, and fitting, antagonists as Lore and the Borg, because they stand for a corruption of utopian thought. This is different from straight-up dystopianism, which is a kissing-cousin to grimdark. There's a relevant critique of that too, of course, and we've seen our fair share of that. But Winn and Jaro are something else: Similar to Lore, they embody a form of fascism. They're charismatic, inspirational ideals and role models, but entirely negative ones, and that's a very Star Trek: Deep Space Nine twist befitting the fact that this show has always had to deal with the temptation of the antihero in a way Star Trek: The Next Generation never really has.

No wonder Minister Jaro doesn't want Li Nalas anywhere near him, because he'd be nothing but competition for him. Competition for Hearts and Minds, which together serve as the arbiter of legacy.