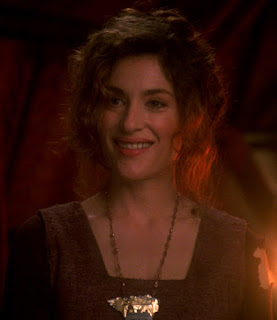 There's a scene near the beginning of “Liaisons” that kills the entire episode for me. It's where Worf and Commander Riker are putting on their dress uniforms and Worf grumbles about the outfit being “too feminine”. This earns him a deserved reprimand by Riker, which I still hate for two reasons. One, I hate any scene like this where one character upsets another, especially a friend. Two, it's impossible for me not to read the narrative as siding with Worf: Worf is manly and grumpy and the writers love him because of that, and they hate this lame stuff about “utopianism” and “equality” that constrains their beloved “conflict”.

You know what? Fuck off. This one scene is emblematic of absolutely everything that has ever been wrong with Star Trek: The Next Generation since these guys took over in 1989.

I'm really not motivated to look further into the episode after that, frankly. It's not like “Liaisons” is a particularly beloved episode and it's not like I'm missing a whole lot: The entire premise of “alien dignitaries trying to experience strange and unfamiliar human emotion by deliberately pissing people off” sounds like a brief for a particularly weak Original Series episode (or at least memorably weak, as they were, to be blunt, *all* weak). Bad Original Series knock-offs were passé in the first season. To have one show up in the seventh is frankly astonishing, and that's another indication of something that's always been wrong with this show: Nobody seems willing to take it on its own terms. Nothing can ever escape the shadow of Kirk, Spock and McCoy, even (especially) when it's already been explicitly killed off.

The original pitch for this episode was apparently for a “Let's Do” take on Misery, the Stephen King story about a famous author who is kidnapped by an obsessive, murderous fan after getting badly injured in a car accident. I am dumbfounded the team even bought the pitch, because for the life of me I cannot figure out how in the universe that *wasn't* going to turn into a horrific disaster. Misery is frequently read as being about the perils of fan culture, and in the context of Star Trek: The Next Generation in its final year that could only be projected onto Star Trek fans. And applying that to Trekkers, even indirectly, seems like a crateringly awful decision that could go wrong in a myriad of different, equally appalling ways.

For one thing, it's staggeringly hypocritical for a show made exclusively by and for Star Trek fans to be criticizing other Star Trek fans. Oh, so it's bad now to be an overzealous Star Trek or science fiction enthusiast? I'm not disagreeing, but who in the hell are the biggest, most overzealous and overenthusiastic Star Trek fans in existence if not the people currently writing this show and using it as methadone for their sexually frustrated creative impulses sparked watching the Original Series as little boys (and yes, I'm using deliberately gendered language here)? It seems more than a little disingenuous to attack others for their passion when you yourself are running the asylum, as it were.

Then there's the fact that critique would have been utterly pointless and myopic to begin with because Star Trek: The Next Generation was a *massive populist hit*. Again, this was no niche, cult sci-fi show watched only by a minuscule population of Nerds: This was one of the biggest, most watched shows on TV *and always had been*. The only reason this project exists is because I watched Star Trek: The Next Generation and if *I* watched it, you can believe it was being watched by people outside the anorak demographic. I have to wonder if the only people who *didn't* know this back then were the people making the damn show. This is why you can't entrust science fiction to science fiction people. They'll just invariably screw the whole thing up.

But no. We all know damn well what a Star Trek: The Next Generation version of Misery would look like, and who precisely it would really be intended to skewer: Women. Namely, fanfiction writers. The villain of the original Misery was Annie Wilkes, a depraved an obsessed fan (read fangirl) of protagonist's Paul Sheldon, who is angry that Sheldon plans to kill off Misery Chastain, the heroine of his Victorian romance series in hopes of starting a new phase of his career. Wilkes keeps Sheldon prisoner and refuses to let him go, baiting him with medication, until he writes a follow-up novel that brings Misery back from the dead. The mildest scenario would have had the show critiquing those who were unwilling to let Star Trek: The Next Generation go and who would keep it around past its time (an impossibly hollow argument we'll be spending all goddamn year dismantling), but I have a terrible feeling that the far more likely scenario would have had this Nerd fraternity of a writing stable getting cheap laughs at the expense of what they perceive as a pathetic and annoying female fandom, even with a female showrunner overseeing them.

Dresses are too feminine for the manly space warriors.

And so, the show would have continued Star Trek's reprehensible and unforgivable history of devouring and erasing its own history, that of the women and female fans who built it into the phenomenon it became. Whether it's the female fanfiction writers of the 1970s or the 1990s, or the normal, everyday people who were casual TV fans who tuned into Star Trek: The Next Generation and Star Trek: Deep Space Nine every week not because they were obsessed but, shock of shocks, because the show was actually pretty good and had broad mainstream appeal. Star Trek: The Next Generation wouldn't have made it out of its first season if not for women, because the overwhelmingly male Star Trek fandom wouldn't touch it. Hell, had Star Trek *in general* been left in the hands of the technoscience Nerds it would have died out in 1967, because they weren't watching Star Trek then. Teenage girls were. The one group of people everyone seems to statistically hate the most. Maybe admitting that women enjoy it is an impossible truth for genre fiction to comprehend because doing so would require it to stop being an insular and doomed fraternal order.

One way or another, “Liaisons” is a story that quite frankly should have been thrown out at the pitch stage. With full admission that I sound a great deal like Annie Wilkes myself, I don't believe Star Trek: The Next Generation deserves to end here at all. If the show feels like it's running out of steam, it's only because the people in charge are and they never really wanted to be doing this project to begin with. The show hasn't run out of potential because it never took hold of the potential it had.
Posted by Unknown at 11:00 PM