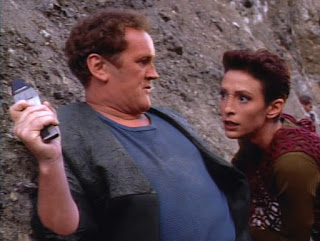 “The Homecoming” opens on one of the more triumphant notes Star Trek: The Next Generation/Star Trek: Deep Space Nine has done in recent memory. There's a slow pan across the new set for the Promenade upper level into Quark's, where the man himself in engaged in one of his classic verbal sparring matches with Odo. The energy carries through to the scene where Quark visits a brooding Kira in her quarters to deliver Li Nalas' earring. Finally, we get a jovial and upbeat Ben Sisko having a charismatic father/son moment with Jake, followed by a friendly and breezy lunch date with Kira. Well, up until she springs the news she wants to take a Runabout to Cardassia 4 to spring a jailbreak.

The sense we get is of a show that's on top of the world, elated by its recent success. Star Trek: Deep Space Nine is *back*, refreshed and energized to continue the creative high it came off the previous season on. And it has every reason to be comfortable and pleased with itself: Late 1993 into early 1994 was the critical, creative and commercial high point for Star Trek as a franchise, and it's on Deep Space 9 that this is manifesting the most visibly and effortlessly. This must have been around the time I started taking serious notice of the show too, because it's “The Homecoming”/“The Circle”/“The Siege” that's among the first crop of Star Trek: Deep Space Nine stories I can recall having an active understanding of the plot and character details from, as opposed to merely faint recollections of dissociated images and scenes. Most of this was due to my having recently getting into Starlog's official Star Trek: Deep Space Nine Magazine around this time (or really, the following Spring) to catch up with the series, but that warrants its own chapter later down the line.

The ironic thing is that by definition, a peak is a high as one can possibly go, and there's nowhere to go from there but down. And while this second/seventh season is in many ways just as good as the crop of episodes that came out the year before, there's an impossible-to-ignore shadow hanging over all the proceedings here, and as good as this opening volley was and is, it also marks the beginning of the end of Star Trek's imperious phase. This won't become clear for another few months though, nor will the plans being drafted behind the scenes that will conspire to make life a living hell for cast and crew alike over the next year, and ultimately bring about Star Trek's end.

For the moment though, Star Trek: Deep Space Nine is riding high. The first half of “The Homecoming” is truly iconic to me-There's Kira and Chief O'Brien in undercover civilian attire in a fierce shootout to liberate Bajoran POWs on one of the very few alien planets where it makes absolutely perfect sense that it's plainly a quarry. Daytime scenes and wide open location shoots in beautiful sunny weather is something I associate a lot with this season: We saw it here and in parts of “Descent”, we'll see it again in the other two parts of this trilogy, as well as in episodes like “Shadowplay”. And it's wonderful to see a laid-back and settled-in Ben Sisko: A lot of audiences (not to mention creative figures) usually think of the station commander as a reserved, taciturn brooding and angsty figure, but here he's completely at ease and on friendly terms with everyone, from Jake and Jadzia to Kira and O'Brien. Although I suppose that's as good a sign as any that the show is on its last legs: That kind of easygoing familial environment isn't going to survive long as the 1990s start to ramp up.

That's a point I want to return to in a paragraph or two as I think it's actually relevant to the climax of “The Homecoming”. But the first thing that struck me on this rewatch is how iffy the political assumptions underlying the return of Li Nalas are, from all involved parties. Everyone, even Commander Sisko and Major Kira, emphasize that Bajor's current tribulations are due to a “lack of strong leadership”, and that if the Bajorans had someone they could all look up to as a planet, that would bring stability back to the sector. This is troubling from this book's perspective, because it's very much in line with the liberal fantasy that everything would be better if “just the right person” was in charge. It is, in fact, the exact mentality (or one of them) that we read “Descent” as being a criticism of: In times of crisis, some would prefer to put their stock in someone they see as singularly strong and charismatic. But that never yields us an Enlightened Ruler or Benevolent (Patriarchal) Dictator, in spite of what liberalism secretly constantly yearns for. Historically speaking, that doesn't get you the liberal fantasy ideal philosopher king, it produces Lore. Because the only people who truly desire power are the exact ones no sane person would ever wish to be in power.

This is why The Circle is the necessary antagonistic force here. The Circle is the logical end result of the re-awoken strands of fundamentalism Star Trek: Deep Space Nine closed out its last season combating (and of the story continuity it introduced as well, though we can't know that for a few more episodes). Bajor is putting its faith in the xenophobic and nativist Circle not because they're “more stable” than the government, but because they're a populist force that's saying what a significant portion of Bajorans want to here. The Circle are “stable” and “strong” because they're reactionary authoritarians (a redundancy if ever there was one), and authoritarians by definition consolidate power. They are one necessary product, alongside cosmopolitanism, of globalization (which is what Star Trek: Deep Space Nine is about even though it's set in outer space). There are only two extremes on the political spectrum, fascism and anarchy, and the antidote to fascism is not “benevolent fascism” because “benevolent fascism” does not exist: It's an impossible fantasy held only by elite liberals that does nothing but close down discourse for actual change. The only true cure for fascism is anarchy.

But this is something I do think the show understands, or at least is a memory lingering within its paratext. Because in the episode's climax, Commander Sisko points out to Li Nalas that what Bajor needs really isn't one person, but a legend. They don't actually need a leader figure, strong or otherwise. What they need is a story or an ideal to believe in and look up to: A role model. It's a lovely sentiment delivered wonderfully and a needed statement of purpose. Which is all the more fitting because, if the writing credit wasn't a dead giveaway, there's the fact that “The Homecoming” originated as a Star Trek: The Next Generation script before Michael Piller pinched it for this show, and it has a very Star Trek: The Next Generation message to deliver. A definitive one, almost. But “The Homecoming” is self-evidently a Star Trek: Deep Space Nine story in scope, setting and politics. This reveals, at a critical moment, how deeply rooted and intertwined these two fictional worlds really are, one more case for the Star Trek: The Next Generation legacy and Star Trek: Deep Space Nine's best argument to date that it should be the one to inherit it.

That history will soon show this was a waste of time and energy and that Star Trek: Deep Space Nine would not only not inherit Star Trek: The Next Generation's mantle but was instead fated to perish alongside it, is almost irrelevant. So long as stories like this exist, their shared legacy is assured for generations to come.
Posted by Unknown at 11:00 PM