“The Face You Wear”: Masks 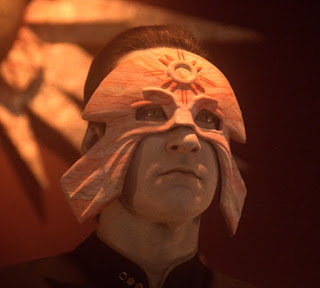 Does a mask hide a person's identity or bring it out? Perhaps it does a little of both; emphasizing certain states of being while keeping others hidden.

We all wear masks. We switch between them every day as we go about our lives, putting on different face and playing a different role for everybody we meet. Rarely, if ever, do we find someone with whom we can share the full multiplicity of people inside us. Instead, we wear the mask appropriate to the encounter. I'm wearing a mask right now for you all: This is the mask of Vaka Rangi, which has come to symbolize certain familiar behaviour traits and tropish signifiers that you have come to expect following this blog for a number of years. As personal as I try to get in my writings, Vaka Rangi is not, has never been and cannot ever be a complete encapsulation of my feelings and my identities for many different reasons. It's a caricatured facsimile meant to stand for specific aspects of it I felt were appropriate and workable enough to weave into a multi-threaded series of narratives.

(This is not, it should be stressed, by definition a bad thing: We always want to evoke different parts of our personalities in different contexts because we all have different skills, talents and experiences that are relevant to different situations. This is ultimately just a more roundabout way of explaining how we call upon and mobilize our positionalities when it's fitting to do so. In this world, not everybody needs to know everything about everybody else all of the time. Think about me however you need to in order to help you get through your day.)

Deanna Troi claims Data is suffering from “android multiple personality disorder”. But she's a psychologist and is trained to view things in terms of diagnoses and disorders. But Deanna Troi is also an artist, as is Data, which is an important point worth returning to. Either way, what Data is experiencing is something far more profound than what the medical terminology would have us believe. In many cultures, masks play a ritual shamanic role: The mask is supposed to embody the essence of a god, spirit or ancestor, so when a shaman adopts the mask he or she is attempting to contact the deity it represents, either through channeling, invocation or direct communication. As in all such rituals, there is a strong performative element-For the duration of mask ceremonies of this type, the shaman “becomes” the deity through a combination of staged artifice (they're literally playing a role) and through magickal, spiritual identification and association. And who better to give a role like this than to Data, our “imitation man” who is defined by the way in which he self-consciously takes on different roles, and is himself played by impressionist Brent Spiner? Indeed, this episode is likely the defining moment where Spiner and Data are finally allowed to meld their respective skills in a way that naturalistically furthers the story's themes.

Data is not just channeling the D'Arsay people's gods and mythological heroes, as Captain Picard points out in the episode's closing moments, he's also channeling their entire civilization. It's a lovely, and very nuanced, sort of paralleling: Folk tradition dictates that gods can take mortal form through ritualized performativity, and its through those same traditions that the D'Arsay in a real sense get to live again. Gods and heroes are localized to the people, places and traditions who honour them, so in many ways you could argue one of the best way to get to know a people is through their stories. It's also an interesting extension of a feature of Data's that's often been mentioned, but rarely explored: That he supposedly contains the memories and experiences of everyone on his colony. This is just that, but with far more meaning and resonance.

Also intriguing is the way the D'Arsay archive ship works. It uses pre-existing matter to literally re-shape an environment into a recreation of its homeland, myths and all. Comparisons have to immediately be drawn with concepts such as alcheringa, the “eternal” or “uncreated” time in the spiritual traditions of the indigenous Australians popularly known as “The Dreaming” or “Dreamtime”. According to the stories of the eternal time, during the prehistory of Australia and of its indigenous cultures (which is not unconvincingly posited to be the same thing), great culture heroes travelled the land, which is amorphous and without form in this time. As they did so, they shaped the land and created sacred places, and the energy signatures they left in their wake during their journeys became trails called yiri, or “songlines”, which could be interacted with by singing a series of songs on the proper sequence. The act of belief and folk tradition itself shapes the place energy of the land and its inhabitants. This is very similar to what we see the D'Arsay archive do to the Enterprise in “Masks”, as it physically reconstructs the layout and environment of the ship piece by piece. And honestly, it's tough to argue this isn't a massive asset to the Enterprise, which now has an imaginative and provocative sense of scale and diversity Star Trek: The Next Generation hasn't always been able to convey.

And yet there's a danger here. Although the way it happens is a bit unconventional as the crew accidentally awakens a singular and unique culture and set of beliefs long dead as opposed to forcibly imposing one on another, we're still witnessing one belief system threatening to engulf and extinguish another. Assimilate it, if you will. Wars of psychogeography are sadly far from uncommon in the history of the world, conquerers and occupiers from the dawn of war using the interplay between land, culture and spirituality to accrue power and stamp out indigenous societies and traditions all over the planet. Native gods don't always get along with the gods of foreigners, even they're brought over by immigrants as opposed to colonists. And this is what the central conflict of “Masks” really is: The gods of place of the Enterprise, which our crew are very much assuming the roles of, and those of D'Arsay clashing over who will be allowed to preside over this space.

And absolute credit to the Enterprise crew, who resolve the situation peacefully and idealistically: Instead of blasting the fuck out of the archive, which was an option at one point, Captain Picard (who is, of course, an archaeologist) is able to communicate with the D'Arsay collective unconscious by taking the time to learn their stories and beliefs and taking up the mantle of one of their own without appropriating it for himself. In this he's also aided by Deanna Troi (who is, of course, an anthropologist, another of her masks), and Geordi the storyteller. Every person who plays a major role in the reenactment and recreation of the D'Arsay psychogeographical landscape is an actor, storyteller or artist on multiple diegetic and extradiegetic levels. So it's only natural that they of all people would be sensitive to the delicate intricacies of this situation, for artists are the modern shamans.

The D'Arsay landscape of myth itself is also interesting to study, as so much of it literally revolves around the figure of Masaka the Sun Goddess. Solar goddesses, particular solar goddesses who are also powerful ruling queens in their own right, as Masaka apparently is, are actually quite rare in studies of comparative mythology (at least in the popular understandings therein). Those who we do see are almost always hypothesized to be relics of extremely old belief systems, by which I mean stone age old. Historical details on them are by definition scant, but what we can piece together seems to indicate that they were strongly venerated and deeply beloved for their power and the care with which they oversaw their people. So at first glance it did strike me as concerning that Masaka seems portrayed as a figure of fear and scorn by so many of her people, and I wasn't entirely sure how I should read that. There's the obvious interpretation, of course, which I hoped to avoid. I also thought that the planet where the D'Arsay culture originated might have orbited very close to their sun, or perhaps their sun went supernova, which might explain the seemingly malevolent depiction of Masaka.

However then it occurred to me that the answer lies in the episode itself. We're witnessing the gestalt of an entire civilization and the history and evolution of its mythology from beginning to end: Gods and heroes are reinterpreted all the time by different storytellers, just as an episode of a TV series can be interpreted different was by different people who watch it. The act of reading generates meaning, and for gods and heroes this shapes their identities, attestations and spheres of influence too. So perhaps Masaka was once a benevolent figure, or at least one capable of both benevolence and malevolence (the sun gives life through its warmth, but can also scorch and dehydrate the earth during a drought), and she became reinterpreted in a more negative light once, let's say, the sun went supernova or there was some other environmental catastrophe that befell the D'Arsay. Or maybe we're just seeing the different viewpoints and interpretations a cross-section of D'Arsay society viewed her from. Either way, that plurality of meaning and identity is captured in both Data's channeling of her as well as Captain Picard's rapport with her as he takes on the role of lunar god Korgano: These are clearly fierce and powerful gods, but the way we view them is incumbent on the eyes we look through ourselves.

Our gods can appear to us in many guises.