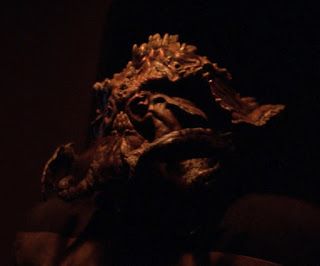 Well, it could be worse. A lot worse.

I've been looking forward to revisiting “Genesis” since I first started this project. Of all the episodes of Star Trek I remember, this is the one that has the absolute widest gulf between popular opinion and my own recollections. Fan consensus on this story is that it's about as bad as it can possibly get-The only episode that seems to regularly beat it out for the title of Worst Star Trek: The Next Generation Episode Ever Made is, deservedly, “Code of Honor”. It's at least regarded as one of the nadirs of the series, and of the franchise as a whole. But I remember being utterly mesmerized by this one back in the day-It's another story whose imagery has haunted me ever since, and I remember immediately taking to it for its grotesque surrealism and dark, foreboding atmosphere. Prior to this rewatch I'd actually only ever seen this episode once, way back when it aired in 1994: I'd always avoided watching it again because I wanted to save it for a time when I could give it a fair and sober evaluation, and also because I probably always knew it was never going to be as good as I remembered it as being.

And it's not. “Genesis” is no masterpiece of popist abstraction in the same way even “Eye of the Beholder”, “Phantasms” and “Dark Page” are. But it is significantly better than people give it credit for being...Or at least there are parts of it that are definitely deserving of praise and attention that people tend to ignore and disregard while in a rush to mock its sillier aspects. You could call it a Curate's Egg (“parts of this disaster are excellent!”) if you were so inclined, but I think even that's being a bit unfair. I found “Genesis” to be an entirely enjoyable and watchable (well, mostly), albeit goofy, outing with some really outstanding cinematographic touches worth taking some time to look at.

So let's get the big thing out of the way right off the bat. The plot device makes absolutely no damn sense. But let's be careful here: This isn't to say the plot makes no sense. Actually, it makes perfect sense, it just doesn't make sense in a way Star Trek fans like. What doesn't make sense is the technobabble stuff, all that business about introns and junk DNA and synthetic T-cell viruses. The script's conception of evolution is notoriously scientifically wonky, and there's absolutely no getting around that. But it's actually not as terrible on this front as you might expect: It's actually very careful to avoid falling into the trap of presenting biological evolution as teleological-I don't think the phrases “lower life form” or “higher life form” appear anywhere in the script, and the central artistic license hinges on the fact that all life shares common ancestors somewhere up the tree, which isn't actually inaccurate, it's just vague.

Certainly when dealing with technobabble explanations for goofball genre fiction plots that are meant to at least have the veneer of plausibility one has to be careful, but in terms of Star Trek's screwups in the outright Bad Science area I don't think “Genesis” is anywhere remotely near as bad as “The Child” or (ugh) “Savage Syndrome” (seriously, if you think this episode is bad and an offensive depiction of evolution, go give that titanic piece of shit a watch). Because that's the thing about this kind of plotline: It's actually not supposed to make literal sense, it's supposed to sound like it might make sense within the show's universe. And “Genesis” pulls that off fine without making its science too terribly misleading: Junk DNA does exist, even though it doesn't work quite the way it does in this story. Also, the episode mercifully goes out of its way to avoid having the black characters “devolve” into apes or older hominid species, which it could very easily have done. That alone I feel is worth of a thumbs-up.

(However that said, the idea that Commander Riker's early hominid is slow-witted and less intelligent than later humanoids is pretty cringe-wrothy.)

And there's actually some really fun stuff that gets done with the creature feature brief on the production level: Captain Picard as a Pygmy Marmoset is hilarious. Reg Barclay as a spider is similarly amusing and Dwight Schultz seems to be having a lot of fun. It's also a really creepily well done prosthetic, likewise Worf: Proto-Klingons are apparently Predators (like from the movie, not the generic classification), which is pretty awesome. He's also the episode's strongest standout by far: Not only are the makeup and sound effects positively bone-shaking, the whole final act of him stalking us through the darkened corridors of the Enterprise is absolutely unforgettable. The image of Data and Captain Picard taking refuge in sickbay as Worf tries to claw his way in, followed by that of the Captain leading him on a chase through the bowels of the ship, is the part of “Genesis” I've always remembered the most vividly.

There are, however, certainly bits of this episode that do not work anywhere near as well. Near the top of the list for me is Deanna Troi turning into an amphibian, which was a particular scene I was really looking forward to seeing again. The way I remember it, I was picturing something like Rebecca Romijin's Mystique from the X-Men movies, except green and with claws, fangs and a mermaid's tail. The actual prosthetic effect in the episode is...something considerably less striking than that. Even worse, during the early stages of her mutation, she actually gets into a fight with Worf over the thermostat. You know it's bad when we start cribbing from 90s stand-up comedy acts. The whole first half of the episode just drags on in general, and there's a whole lot of snippy arguing and disciplining of the sort I just can't stand. It doesn't really feel like the episode is building any sort of dramatic tension or mystery over what's happening to the crew and it just makes me wish they'd all hurry up and turn into monsters already, although maybe that's because I already know what's going to happen.

(As forgettable and annoying as the first half is, however, the bit with the asteroid target practice may be another one of those orphaned bits of imagery that's stuck with me all these years for some reason. Naturally, if this is it, it's far more obnoxious than I remember.)

And that's a shame, because the second half (or maybe the last third) is actually really good. The moment we cut to Data and Captain Picard in the shuttlecraft finding out that the Enterprise is mysteriously and creepily adrift things pick up in a big way. As soon as they get aboard, the episode becomes a horror movie set on a ghost ship that's been turned into a weird and threatening alien menagerie. And the atmosphere it goes for is pitch-perfect, with red-tinted lighting that's so dark you can barely make anything out and disturbing and unfamiliar animal cries faintly echoing through the halls. You sort of wish the entire episode could have been like this. Worf's arrival just ratchets up the Holy Shit quotient even further, and the climactic chase scene in particular is amazingly shot. This is all credit to the episode's phenomenal director, none other than Gates McFadden herself. Bit annoying the choreographer, stage combat instructor, theatre vet and seasoned unit director didn't get to direct a production of her own until six weeks before her show ends, but hey, I suppose it's better than nothing.

Regardless, Gates' experience, eye and obvious skill really help elevate what might otherwise have been a complete misfire instead of only a partial one. Her leadership behind the camera is really the best part of “Genesis” by light years. She's a deft hand at the episode's more surrealist and horror aspects, and an absolute master at setting a mood. Makes you wish that, in addition to “Genesis” itself being a bit better, Gates could have gotten a shot at helming a tighter Brannon Braga script like “Eye of the Beholder” and the upcoming “Emergence”, or something else of its ilk like “Dark Page”: She really is the perfect director in the stable to handle this kind of wildness. It's so immensely infuriating that Star Trek: The Next Generation has finally hit on a reliably winning story structure with the talent to back it up and make it happen and it's only got a month and a half left to live.