“...vibrations that have been left behind in space and time.”: The Battle 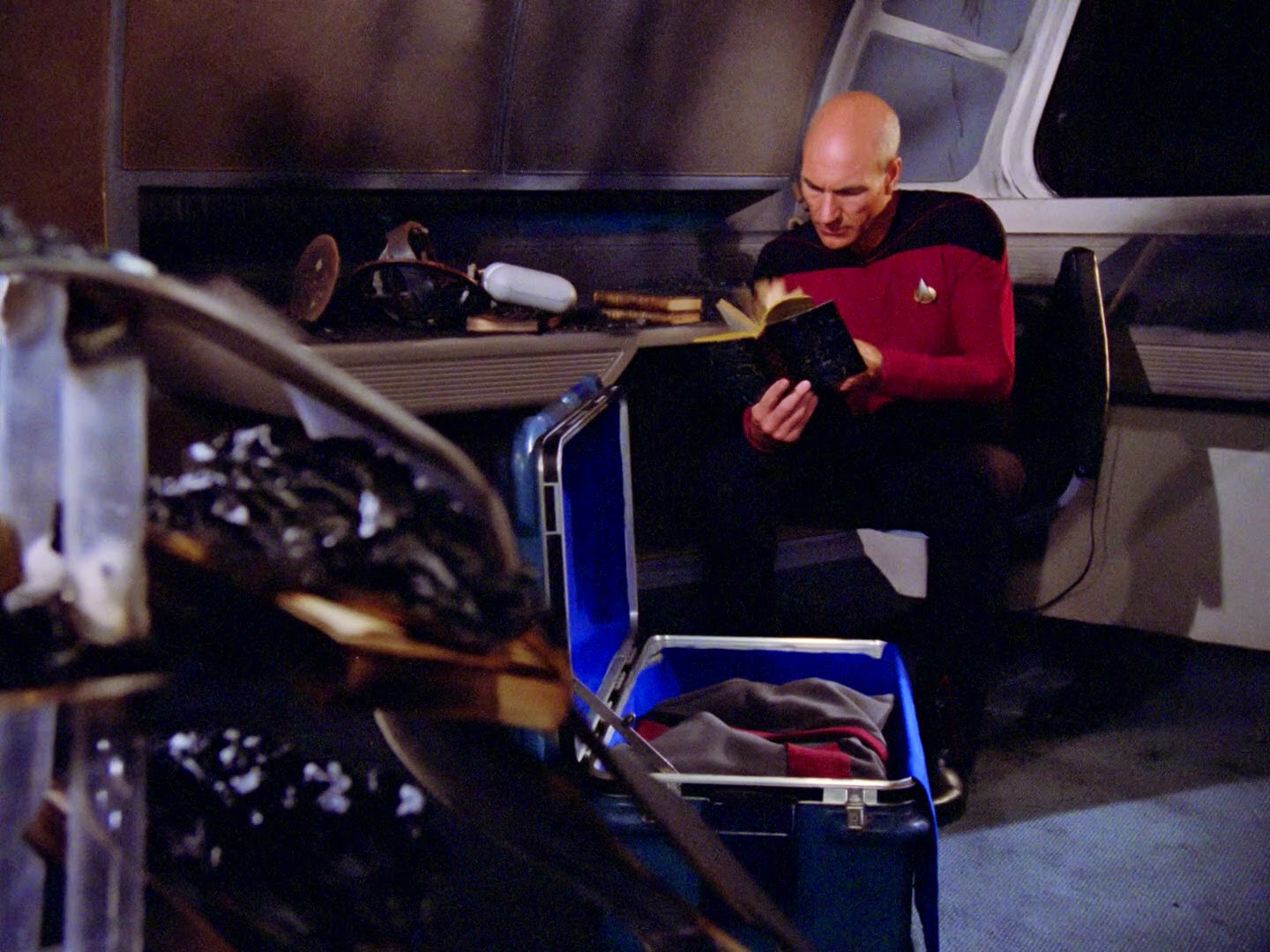 It's beyond a cliche to say that history repeats itself. In fact, I'm not sure it's ever been the case where that hasn't been beyond a cliche. The phrase is usually invoked when someone wants to make a sweeping generalization about human shortsightedness or failing to learn from the past.

In Star Trek, the past tends to be spoken of as something we must move beyond. Indeed, that's the central thesis of “The Battle”, and the episode gives us two contrasting perspectives for how this manifests in people. In one corner we have DaiMon Bok, who has spent the last nine years obsessed with his son's accidental death and with coming up with a way to punish Captain Picard for it because he can't move on and needs someone to blame for his grief. In the other we have Captain Picard himself who, while touched to be able to return to the USS Stargazer, also frequently makes it clear that this is something from his past that must remain there. The torture he undergoes at the hands of Bok's thought-maker is simply a metaphor for how dangerous it is to “live in the past”, how it can consume a person and keep them from moving forward. And here again is that theme of progressing, of going forth: What I have always taken from Star Trek: The Next Generation, and how I choose to read this theme as it appears here and elsewhere in the Star Trek franchise, is one of continually growing *as a person*. Of constantly striving to be learn a little bit every day, and always striving to improve oneself as a human being. Of never settling or becoming complacent.

But there is another reading of this, a reading that is, from my perspective, altogether less savoury, yet one that's not quite reducible out of the larger conceptual framework of Star Trek this series does inherit. And that's the notion of progress, and history itself, as teleology. The idea that one must go forward for this is the right and natural way to go, or indeed the *only* way to go, and that this will ultimately get us to the best possible ending point. “Boldly going forward because we can't find reverse”, as it were. What this does is impose a hierarchical, modernist master narrative over the theme, and this is more than a little disturbing considering the technofetishism that does surround Star Trek, and that's only going to increase as Star Trek: The Next Generation goes on. The franchise has had gravely concerning run-ins with Modernization Theory and managerial progressive thought at times, and those are not so easily forgotten, especially at the comparatively young state of our new show at this time. It's the self-absorbed, manifest destiny style of futurism that has dogged the entire genre of Western science fiction since its earliest days, and Star Trek: The Next Generation will have to grapple with it one way or another. It doesn't have a choice, as, merely by being Star Trek it becomes saddled with the franchise's undeniable (albeit tenuous) connection to Golden Age Hard SF.

I hasten to add I don't think this is something any of Star Trek's creative figures actually subscribe to, at least not any of its current (1987) creative figures. When Star Trek's writers, designers, artists and producers talk about the franchise's utopian dream, I really do think they're sincere and actually mean what they say. With the possible exception of certain Nerd Culture, engineering and technoscience subgroups within its fandom, people who are genuinely invested in Star Trek as a shared cultural myth understand that its role is not to predict the future, but provide a fantasy world that imagines a better life for us in the present. They know that the series has a frankly unique opportunity to look at people's emotions and concerns and provide ways for us to explore them in a healthy, positive and constructive way. Even Gene Roddenberry himself was by this point well aware of what Star Trek really was, what it stood for and what it meant to people, and a big part of the reason he was as controlling as he was here was only because he was keenly aware of the responsibility Star Trek: The Next Generation had. That he wasn't amazing at managing all of that and had (many, many) personal vices of his own is a separate issue: The important thing is that he understood and he cared.

This is why one of the factions of Trekker culture I absolutely cannot stand and have no time for are those who accuse Star Trek: The Next Generation of being a boring, whitewashed conflict-free gated community and maintain what the show ought to have been doing is pointing out how corrupt and decadent the world of Star Trek really is and deconstructing its “so-called utopia”. There are a great many moral, ethical and conceptual issues with the Federation and Starfleet (I of all people am certainly not averse to pointing that out), and while first of all the show does not get nearly enough credit for acknowledging and problematizing this to the extent it does (in fact we're coming up on a big episode that does just that), more relevantly, that's not Star Trek: The Next Generation's *job*, or at least not the extent of it. Rather, what this show does is, through a series of role models and ideals, give us the language of symbols we need to work through issues in our own day-to-day lives. No, the world of Star Trek is never something that's going to actually come to be, but that's not the point: The point is it's a place we can visit and take lessons and ideas back home from. Star Trek: The Next Generation doesn't “ignore” conflict, it's trying to help us deal with conflict in a more positive and healthful way.

But a compulsion to move beyond the past, or at least learn from it lest we be doomed to repeat it, requires one to subscribe to a very specific set of axioms and beliefs. I've spoken at times of temporal perception around the world, and it's perhaps worth returning to that here. The idea of a discrete past, present and future is not a universal one, rather, it's (generally speaking, but not uniquely) a Western innovation with its own quirks and eccentricities that shape how those claiming such a heritage tend to perceive things. There is a case to be made it's a more harmful way of looking at things too, as recent studies contrasting “unitense” languages (like English) with “monotense” languages (like German, Mandarin and Japanese), show the latter to be overwhelmingly happier and both physically and mentally healthier. The idea being, one supposes, that people who more consciously deliberate over a future are also more likely to see it as something faraway they need not worry about. By contrast, people who don't preoccupy themselves with such things, or, as many indigenous people do, see time as a cyclical and ever-evolving present, are more likely to take action to improve their lives and the world around them in the moment.

And even if you do hold onto the idea of a past, as either something to be avoided or looked back upon with nostalgic sadness, you must ask yourself the question: In either case, is the past something to be moved beyond and forgotten? I submit a convincing case could be made that it's not. We all vividly remember our childhoods or other such formative and meaningful moments in our lives, rose-tinted and distorted as those memories may oftentimes be, and those times all had a hand in shaping the people we became. Indeed, in the last Ferengi episode, Commander Riker told Portal how he doesn't begrudge the Ferengi their beliefs because to do so would be to deny their past, and Riker can hardly “hate the people” that humans “used to be”. This is why it upsets me when I hear wistful thought experiments like “if you could go back and change anything about your past knowing what you know know, what would you change?”: Because I couldn't change anything, for fear of dramatically altering the person I am now, and the person I am now is someone I'm proud of, because they're confident and assured in their identity and always strives to learn and grow.

But in a more esoteric sense, I find that memories of that past can oftentimes prove invaluable in the present, to use a starkly Western linguistic form for the moment. Star Trek: The Next Generation and the Long 1980s are long in my past, and yet they are both still things that I treasure and are absolutely fundamental to the positionalities I now hold, and I'm not ashamed to admit that. There are many things from this period I miss and that I think the world could stand to re-learn, and many events from it I constantly look back on and re-evaluate in my mind. The very act of doing what I'm doing with this project, revisiting an old television show from long ago and far away that used to mean one thing to me and now means something else, is in a very material sense proving that the past lives on in some sense. I think as we grow older, we cannot but help to reflect on things in an attempt to understand ourselves a little better, and you can define yourself anywhere along those axes that you like, either in opposition or in solidarity. But we mustn't ever abandon the past or our memory not because history will repeat itself if we do (it will anyway, that's how time works), but because we can't cut loose such an important part of what makes us who we are.

What about you? What are some of the memories that help you understand the truth about yourself?