“City of prose and fantasy”: The Last Outpost 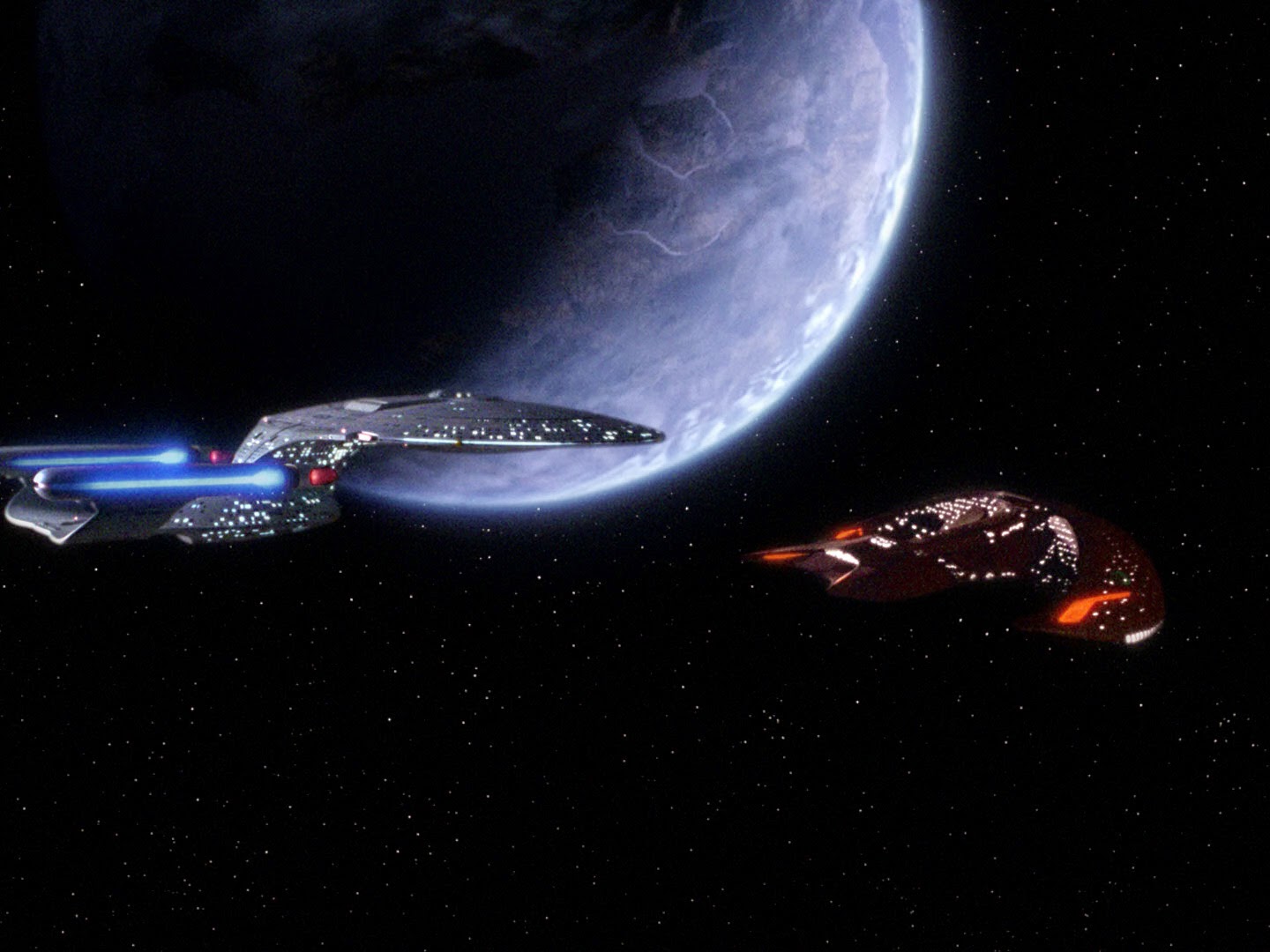 For a brief period of time when I was younger my family owned a small local toy store. Apart from my more cosmopolitan cousins, visiting their store was one of the only ways I had to keep abreast of the developments in pop culture, or at least the segment they catered to.

Because they were set up as vendors, this got my parents invites to the annual Toy Fair in New York City every year they owned the business. On a couple of occasions I accompanied them on their business trips, and oftentimes they were my only opportunity to be exposed to a genuine world city. One one occasion I recall quite distinctly, we went to go visit the flagship store for international toy retail giant FAO Scwarz on Fifth Avenue in Manhattan. Just like everything else in New York, FAO Schwarz was mostly known for very high-end, luxury things, in particular their life-sized stuffed animals, which they likely at least partially got from German toy manufacturer Steiff, whose products they also carried (and was also probably one of the reasons my parents went there, because their store carried them too).

My memories of FAO Schwarz are twofold. Firstly, I remember making a beeline for the video game and cartoon show tie-in action figures. We didn't have anything on a remotely comparable scale back home, and this was potentially my one opportunity to get physical representations of some of my favourite characters. But secondly, I was struck by how enormous, grand and lavish it all felt: In hindsight this is at least a little understandable, considering it was the flagship store of a major brand on Fifth Avenue in Manhattan, but I still remember marveling at how upscale and aristocratic it felt. FAO Schwarz seemed to be one of the most New York places we went in New York, if that makes any sense at all; it had every ounce of the archetypical gold-rimmed, art deco feeling that characterizes Manhattan, and it radiated that from every corner. It was at once exciting, but also more than a little intimidating. I guess in hindsight, my visit to that toy store in Manhattan embodied for me all the excess and decadence that capitalism naturally leads to, in spite of the nice things it can also make for us. 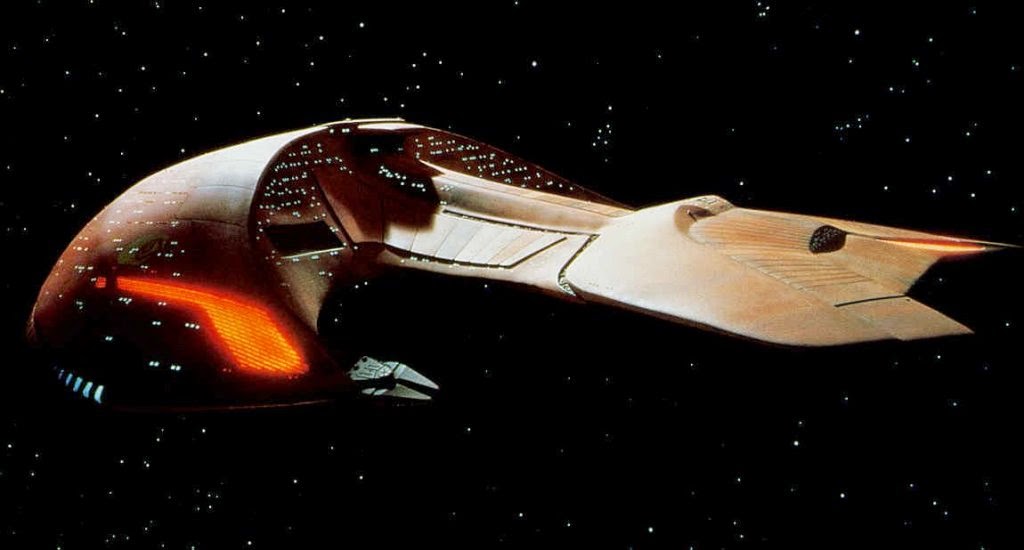 I think Andy Probert's work on Star Trek: The Next Generation is criminally overlooked. His fellow designers practically worship him, deservedly and understandably so, but I'm not sure it's as recognised outside of those small and select circles as it really ought to be. His three starship designs in particular are genuine works of art, and look like absolutely nothing else. I've already talked a bit about the Enterprise, though I could talk about the Enterprise basically forever, but “The Last Outpost” gives us the second of the three: The Ferengi Marauder. What strikes me the most about this ship is the thickness of that inner ring, how there are so many tiny windows, and how they all face outward towards us. I find myself mesmerized by windows on starships: I think they can give us a truly awe-inspiring sense of scale that, at least for me, really fires the imagination. Every time I look at one of these ships, especially Probert's designs, I find myself dreaming about everyday goings-on onboard, watching them from a distance. An entire thriving community of individuals, who seem so small because they're so far from us, living and working together in this floating city that seems to have a personality of itself, dwarfed again by the vastness of space it's adrift in.


Looking at those windows on the Ferengi Marauder, I can't help but be reminded of skyscraper office buildings in big cities on Earth. Maybe that's at least part of the reason why when I imagine life on a Ferengi Marauder, I always visualize the interior looking a lot like FAO Schwarz's flagship store on Fifth Avenue. I can't recall offhand if we ever get a look inside a Ferengi starship (if memory serves me there might be a brief glimpse coming up a few episodes from now in “The Battle”), but I don't care and I hope we never do: More often then not when Star Trek: The Next Generation tries to depict an extraterrestrial culture through design, I tend to be very disappointed. I usually prefer my imaginary version much better and find it far more evocative. Perhaps it's on some level appropriate then that one of my first Playmates Star Trek: The Next Generation action figures was a Ferengi based on their appearance in “The Last Outpost”. 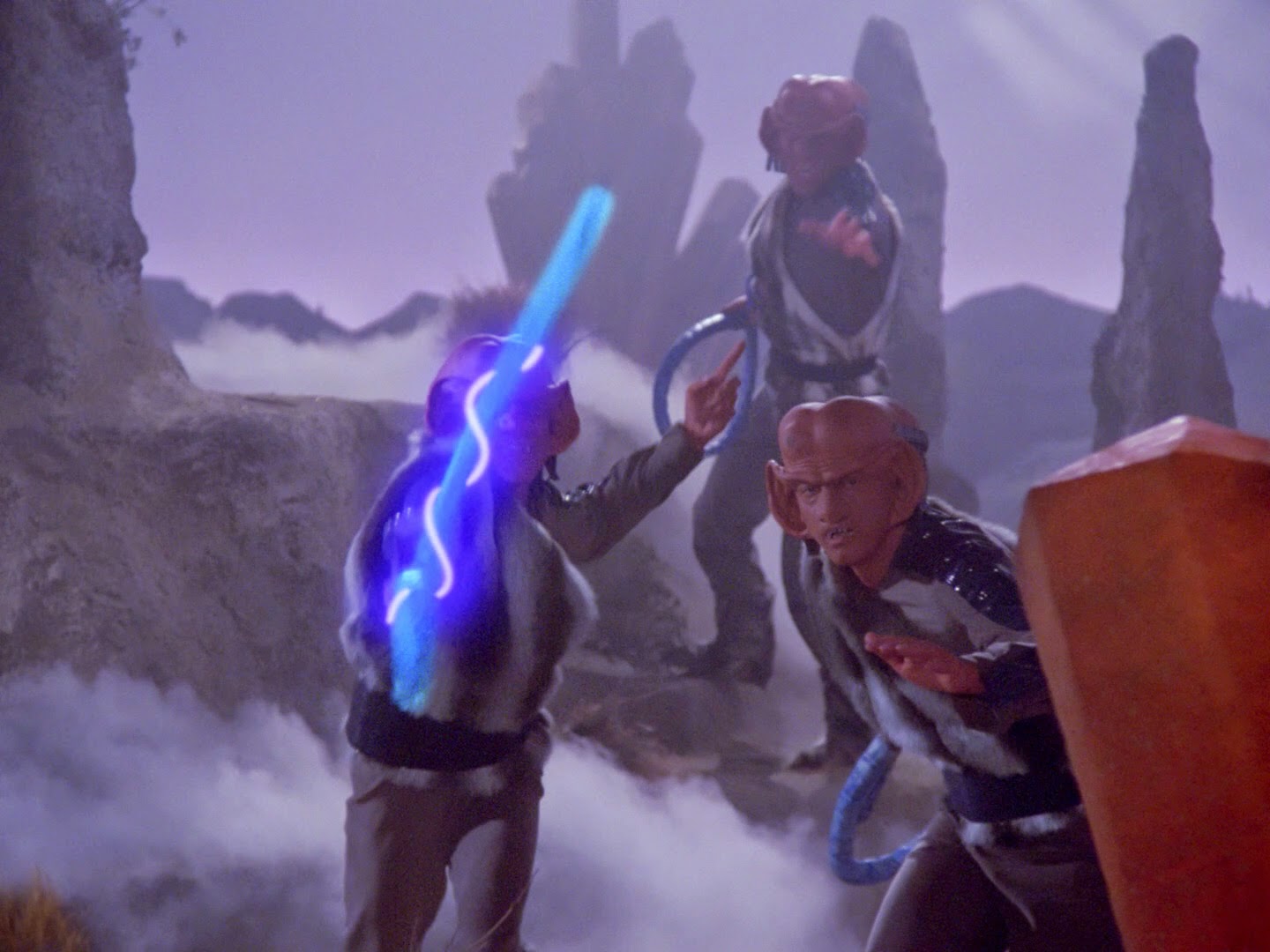 The Ferengi are, of course, meant to represent unchecked capitalistic greed; the absolute worst aspects of late-20th Century Western society magnified and caricatured to dangerous extremes. Even their name, “Ferengi”, originates from an Arabic term for “foreigner” that's come refer to Westerners most typically in modern colloquial parlance. In this episode they even carry energy whips, a futuristic sci-fi update of the age old symbol of the oppressor and slave owner (and yes, while I know slavery did not originate with the West, they're the ones who made it a booming and lucrative global industry). I suspect the Ferengi would show a lot of art deco influences in their architecture and design, with copious flaunting of conspicuous consumption as a demonstration of the power, status and privilege it symbolizes and that they have managed to accrue through their capitalistic practices. There would be a lot of marble flooring, golden pillars, towering ceilings adorned with faux-classical art, neo-Gothic touches and busy offices looking out into space (all the more fitting, reminiscent as it is of those archetypical “dedicated” office workers we're always told to look up to who neglect their families and their lives to keep long hours at their job into the night). A Ferengi starship would look like a high-rise Manhattan brokerage firm. 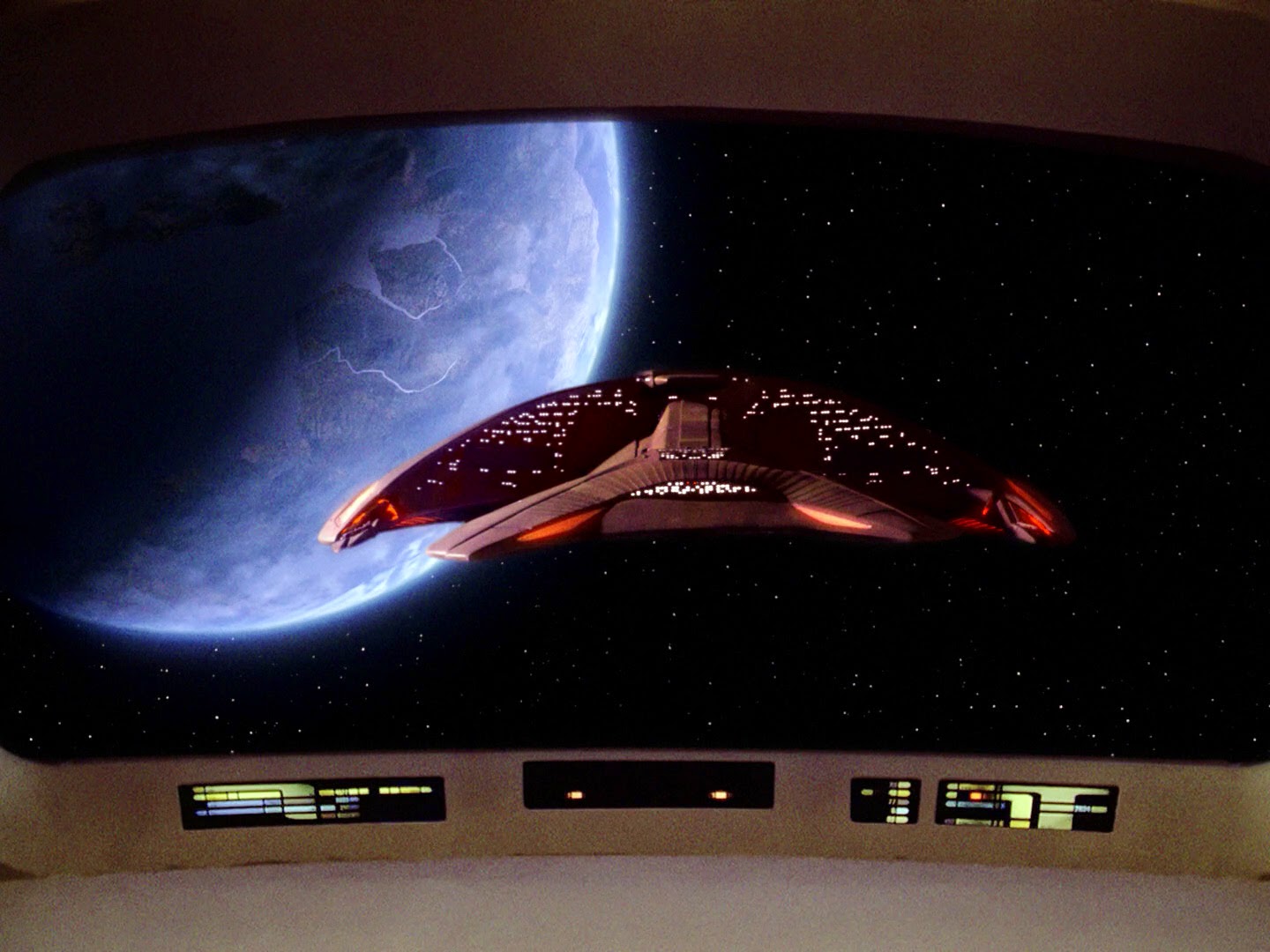 The Ferengi were introduced in this episode to be Star Trek: The Next Generation's reoccurring antagonists. This is a pivotal moment in the development of the series, as it's the first time it comes out and clearly states the things it's opposed to, and regardless of your feelings about this episode or the Ferengi more generally, it must be admitted this is a brazen move. Star Trek: The Next Generation is consciously, deliberately taking absolutely everything idolized by the Neoconservative segment of the Long 1980s, twisting it into grotesque caricature and firmly, confidently declaring that this is unacceptable and is something humanity must put behind it if it ever wants to progress. 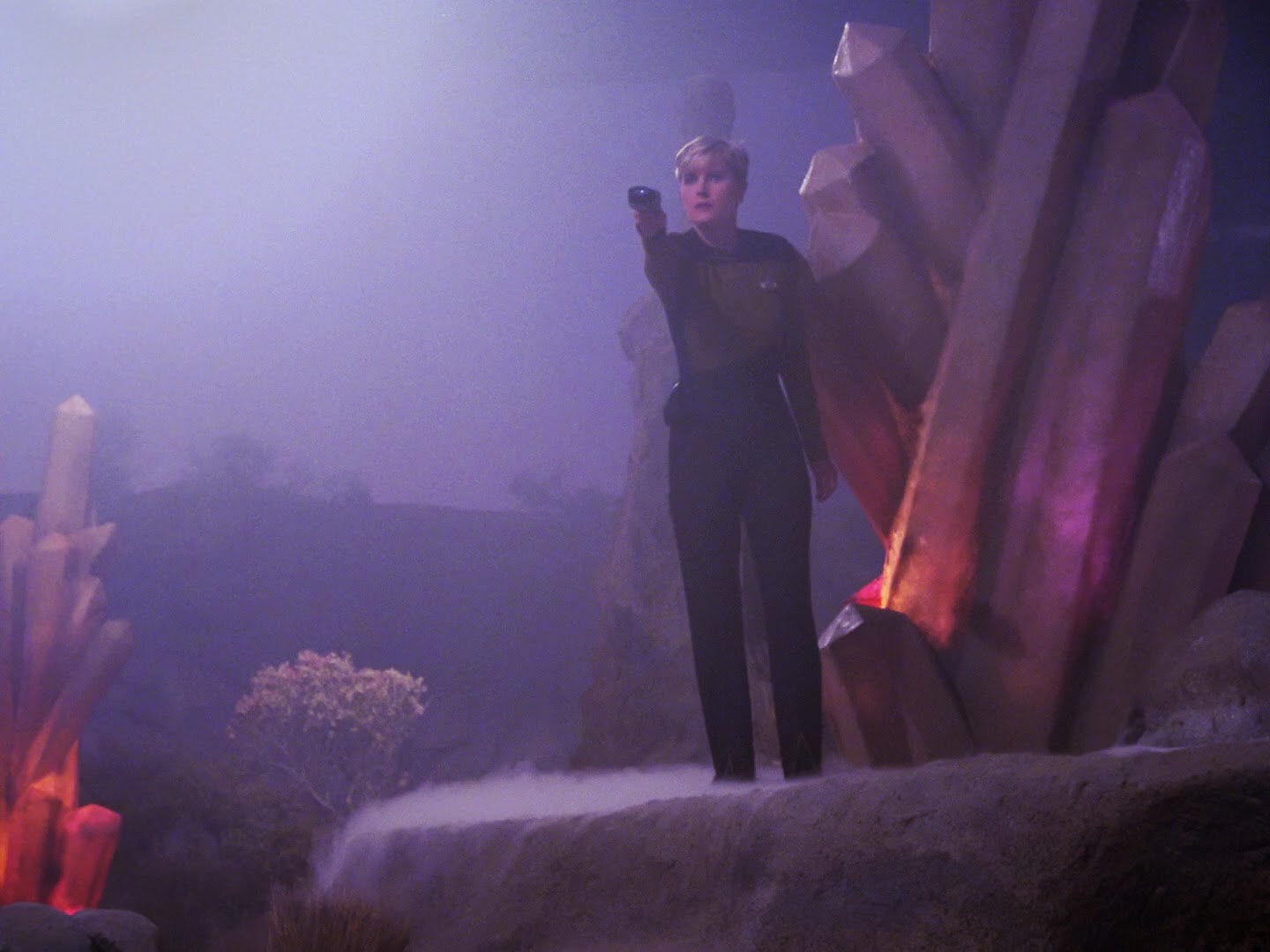 The scene where Letek and his away team react with horror at the fact that Tasha is allowed to work alongside her male crewmates as an equal, and even *wears clothes*, is actually brilliant: Letek's objection ticks all of the misogynistic pseudo-feminist boxes-He bemoans how Earth women are “forced” to work and wear clothes, arguing that the Ferengi prohibition of such things is a more noble and respectful treatment of women. Just think about how many male chauvanists have tried to keep women from holding the same positions of men while phrasing it as if they're concerned about their well-being or consider women in some sense too special to do that sort of thing, or how many “Strong Female Characters” (in the Kate Beaton sense) refer to bras as “unnatural restraints”. It's a dead-on satire of patriarchal gender norms and assumptions in contemporary Western culture. 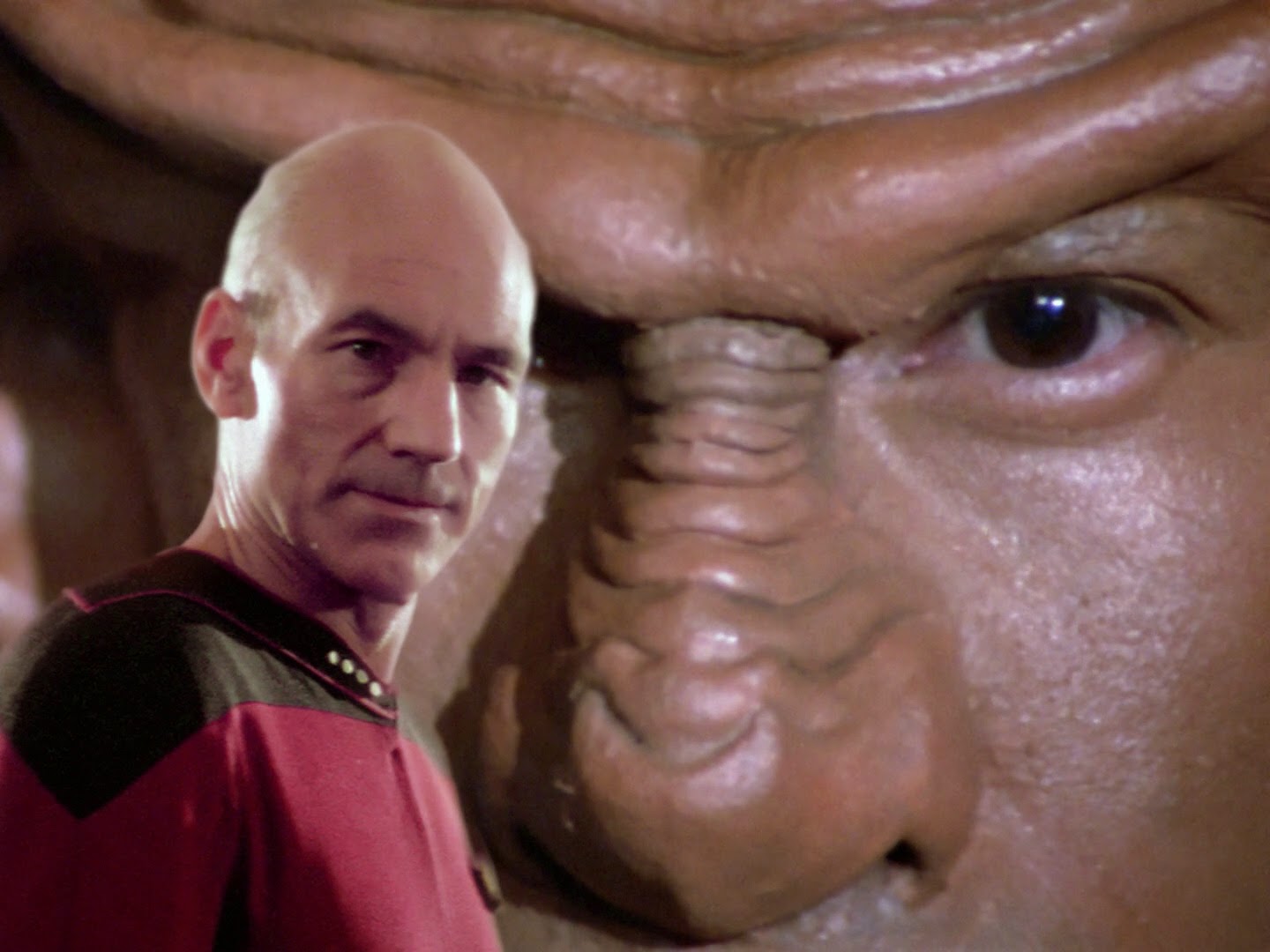 A lot of people didn't like the way the Ferengi were depicted here, but I'm personally not as bothered by it for a couple of reasons. One argument is that they're designed to be racist stereotypes of Jewish people which, while provably untrue, is at least easy to understand how someone could come to that reading. Less defensible for me is the common argument that they're too silly and not as threatening as a reoccurring antagonist would need to be. I'm not at all convinced by this for two reasons: One, Mike Gomez's DaiMon Tarr is fine, coming across as suitably larger than life if you're into that. So's Armin Shimerman's Letek, who's delightfully slimy and menacing whenever he gets to take to lead in a scene. But more to the point, I don't think it's ever a requirement that antagonists be scary and threatening, and that the Ferengi aren't here is supposed to mean something. Remember capitalism, especially the kind of high-powered, ruthlessly focused capitalism that the 1980s Neoconservartives love, is inherently patriarchal and masculinist.

There's a severe male power fantasy involved with anyone who plays that game long enough to accrue any kind of status, and I speak from experience here as I've had dealings with a lot of these people both through cultural anthropology work and my own life. What Star Trek: The Next Generation is trying to do here is strip all that away from capitalism, to depict it as selfishly juvenile and shortsighted as it really is. That's why the Ferengi are all short and jump around trying to ineffectually worm their way out of everything. To me, that's a perfectly valid, and indeed laudable, thing for this show to be doing: “The Last Outpost” marks the point where Star Trek: The Next Generation finally puts its money where its mouth is and takes a stand against something. Now I will grant the show gets carried away with this: Apart from Gomez and Shimerman, the Ferengi guest cast does overact some and their incessant gurning and mugging borders on the insufferable. I could see that crossing the line into the mean-spirited for some, and, as Shimerman points out, they were directed to “jump up and down like crazed gerbils”. But the underlying idea, a group of antagonists who are a joke instead of a menace, isn't by definition a bad one.

The Ferengi will undergo a substantial overhaul and reimagining from here, especially on Star Trek: Deep Space Nine. But oftentimes I fear the Ferengi became *too* sympathetic: Ira Behr is famously fond of them, and he's on record saying they're more real, human and likable than the humans on Star Trek. I think that kind of thinking is both dangerous and reactionary. While there are some great things that can be and will be done with Quark as a character, turning the Ferengi into just another quirky and lovable Star Trek race effaces the very real, very progressive and very anti-authoritarian message they were designed with in mind. And doing that is nothing more than yet another way hegemonic capitalism defangs, nullifies and extinguishes any threat to its entrenchment and authority.

If we allow it to keep doing that, we'd be forsaking our gods, our dreams and our futures.
Posted by Unknown at 11:00 PM