“You can check out anytime you want, but you can never leave”: The Royale 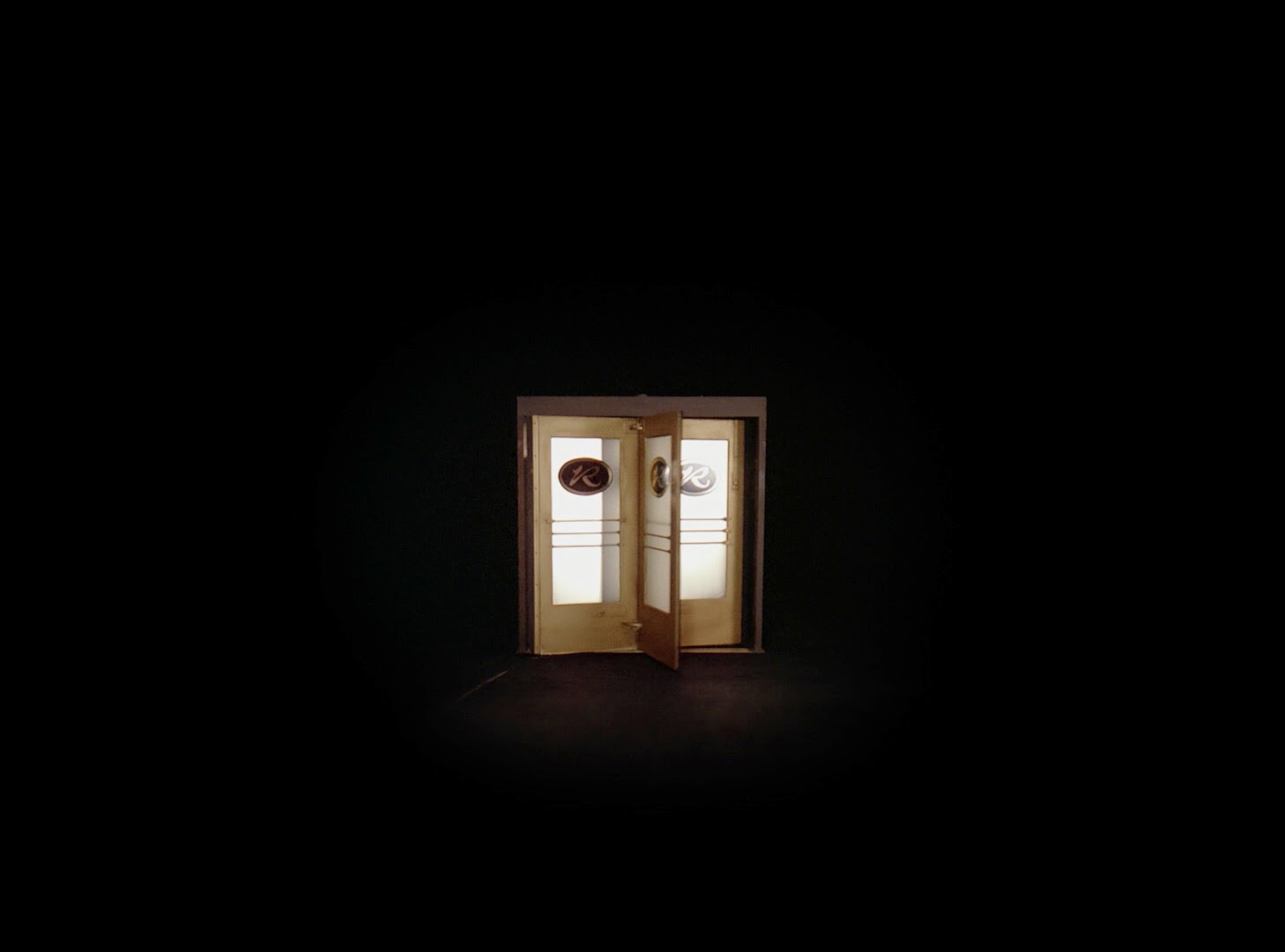 “The Royale” is another episode that nobody in particular is especially fond of and that I frequently see gracing any number of “Worst Of” lists. One is certainly not enthused by looking at its production history: Originally pitched for very early in the first season, it sat ignored in the slush pile of unused scripts until necessity required its exhumation in the second. It was also the subject of yet another one of writer Tracy Tormé's trademark spats with then-producer Maurice Hurley, and apparently it was the straw that broke the camel's back too, as the dispute finally led Tormé to walk off of Star Trek: The Next Generation at the end of the year.

Tormé claims his original pitch hinged far more heavily on surrealist imagery and symbolism. His primary influence while writing it was The Prisoner, and he wanted to bring the same kind of abstract and multi-tiered psychedelia that characterized that show to Star Trek: The Next Generation. And you can see at least some of that in the finished product, with the eery revolving door afloat in nothingness, to the guests who act in bizarrely programmatic ways and the way the hotel itself operates. Apparently Hurley objected to this as well as the very prominent role the astronaut character was going to have, the former for vague and unspecified reasons (which is troublingly something of a hallmark of Hurley's tenure) and the latter because he felt it wasn't good for the show to have big guest stars and couldn't afford it even if it was. This, of course, does little to explain Billy Campbell and Howie Seago showing up earlier in the season. Another thing it doesn't explain is why Patrick McGoohan was tapped to appear for three minutes in “The Schizoid Man” when offering him the part of the then-living Colonel Richey here seems like the most dumbly obvious idea in the universe. Sadly, another hallmark of the Maurice Hurley era has been its pathological aversion to sense.

Given its origins then, its unsurprising that “The Royale” feels so much like an Original Series episode: Like “The Naked Now”, “Code of Honor”, “Blood and Fire”, "Justice", "Angel One" and "When The Bough Breaks", this feels straightforwardly like the creative team cherry-picked some narrative structures and devices from the old show, shuffled them around a bit and changed the names. Unlike those episodes, however, “The Royale” as aired is actually surprisingly serviceable in spite of itself: It doesn't feel like a reiteration of the abjectly terrible aspects of the Original Series or an embarrassingly tepid attempt to ape its better ones, it actually feels like something the Original Series could have done and done quite well. It's got the campy, performative fun of episodes like “A Piece of the Action” blended with the haunting and disquieting surrealism of something like “The Empath”. Granting both that the episode as aired is not what Tormé wanted it to be and that, like so much of this season, it was thrown together at the last minute just to get something on the air that week, it does seem as if “The Royale” is coming perilously close to standing among the very best of the Original Series just from that brief alone.

But that's the problem, of course. What worked for Star Trek isn't going to work for Star Trek: The Next Generation, so that damns “The Royale” before it even gets going. As intriguing as it sounds and as fun as the central mystery and period trappings can get at times, the fact remains we should be well beyond this kind of story if for no other reason that this show doesn't have William Shatner and William Shatner was so crucial to making this kind of plot work in the first place. Sure, the Next Generation cast are brilliant performers in their own right, but their talents aren't in the same areas Shatner's were and they have their own set of creative needs that need to be met and accommodated for. And what's been so frustrating about all of this show's middling moments to date has been its stubbornly steadfast refusal to do precisely that: Whether because the creative team didn't yet know better (as was the case last year), were actually physically prevented from doing better (as is the case this season) or couldn't overcome their Nerdy, fanboyish nostalgia-driven impulses (as will be the case on an irritating number of occasions during the latter third or so of the series' run), the sad truth is the production realities of Star Trek: The Next Generation do not have the best interests of Star Trek: The Next Generation at heart.

And yet there really is a lot of metafictional fun to be had here: You've obviously got the away team grooving on the setting and doing the standard “A Piece of the Action” narrative intruder stuff, which is always good for at least a couple of laughs. But what's more interesting to me is that the book the Thetans have decided to crib from is explicitly described quite frequently throughout the episode as being an awful pulp detective story famously loaded with “stock cliches” and “one dimensional characters” who lack any form of development. So much so, in fact, that Colonel Richey considered it a living hell and death to be a welcome relief from the unceasing torment of existence. This, at least, is something the show couldn't have done with the holodeck: One assumes that if a program started going poorly for the crew they could just change it. No, to fully comment on and learn from particularly bad writing, you do kind of need to be trapped in it. Which is, come to think of it, something Star Trek has an undeniably storied history of.

In this context it does start to seem appropriate in a somewhat roundabout way that “The Royale” air during a time when Star Trek: The Next Generation, struggling just to keep itself on the air week to week, must resort to making episodes out of material that can charitably be called a retread of 1960s-style television science fiction. The danger is, after all, that the away team will be trapped in the stock and cliched world of the Hotel Royale forever, and it's not too much of an intellectual leap to go from that to drafting a sweeping commentary about the state of the series and what its relationship with its predecessor is at this point in time. “The Royale” may be good Original Series-style Star Trek, but that's not good enough anymore. Even fans, who usually aren't wont to admit this sort of thing, must subconsciously have been aware the sell-by date for this kind of story was long passed by 1989 given the reaction it seems to have garnered. Sure, they'll chalk it up the things like the writer's guild strike or the three season rule or general ineptitude, but the underlying truth all of this obfuscates is that, even now, the Star Trek: The Next Generation creative team has gotten *so* good it can toss out a story that would traditionally have been considered a classic as a middling filler episode.

The danger here is that Star Trek: The Next Generation will be doomed to live out the rest of its days restricted by the limitations of its predecessor.

But of course, Richey bears no ill will to the Thetans; they did their best, after all, and were just trying to create a story he would be comfortable living in. Perhaps if they had access to other works of Earth literature, they could have improved their own writing style. Many beginning writers suffer from a limited reference pool, and sometimes all it takes to help a new writer is to broader their horizons. We see it time and time again in Star Trek fandom, with so many self-described Trekkers not knowing much of the world outside of their favourite TV franchise. A TV franchise that, let's not forget, itself has roots in the exact same dime-store pulp fluff that constitutes novels like Hotel Royale. We can see it even as far back as, say “A Trekkie's Tale”. Because what is the Mary Sue archetype except a collection of forgivable beginning writer's mistakes? And what did Paula Smith want but to help guide the writers under her tutelage to move beyond them? If Star Trek: The Next Generation must internalize things from Star Trek's prehistory, perhaps it says all that needs saying that it's chosen to internalize this.
Posted by Unknown at 11:00 PM