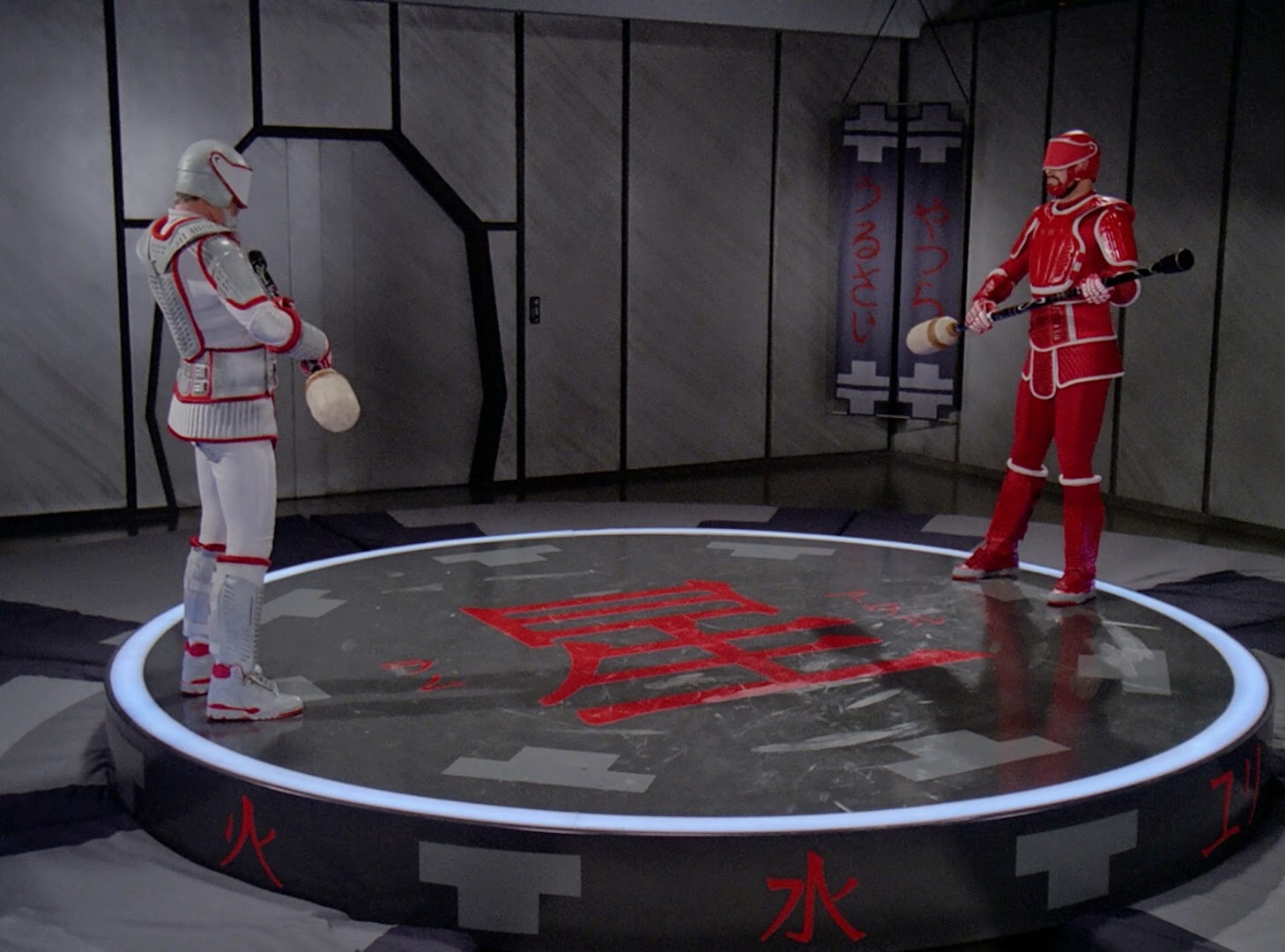 Of late, Star Trek: The Next Generation has been trying to flesh out its characters a bit beyond the one-note briefs they were originally conceived as. Though the show started strong displaying its potential to be a powerful ensemble series, the first season frustratingly did end up as basically “The Picard, Riker and Data Show”. This season, in spite of everything, has at least made attempted inroads to correct this, with strong highlights for characters like Geordi, Worf, Deanna, O'Brien, Guinan and Doctor Pulaski (the latter if only because they were new additions to the cast).

That's not to say there haven't been a huge amount of exposure for the would-be triumvirate though: Picard and Data have both essentially worn out their quota for the entire year already, and Riker isn't far behind with this episode. Although that said “The Icarus Factor” is straightforwardly the sort of thing that Star Trek: The Next Generation ought to be really good at: At its heart, it's an interlocking series of vignettes about Riker, his father, Doctor Pulaski, Troi, Worf, O'Brien, Data, Geordi and Wesley, and this is pretty much the ideal structure for this show to handle character pieces because it takes a slice of shipboard life and shows how all these different characters react to a given situation and the kinds of relationships they have with each other.

Unfortunately, “The Icarus Factor” is also something of a hot mess.

This *should* be a relatively simple A/B plot structure with both halves of the narrative demonstrating the themes of family and where you make your home. Riker is (justifiably) estranged from his father because of his behaviour when he was a child while at the same time contemplating a promotion that would take him away from the Enterprise. Kyle (and actually Captain Picard, for that matter) acts as if Will is going to accept even before he's made a decision precisely because it would put him in charge of a dangerous mission and they assume that he, like his father, can't resist a challenge. Meanwhile, Worf is feeling lonely and isolated because he's missing an important Klingon rite of passage meant to be shared with family, and he has no Klingon family to speak of and doesn't think his friends on the Enterprise will understand. There's even a bit of overlap when Worf asks to join Riker on his new assignment because the high risk would give them an opportunity to die in glorious battle together, and Worf considers Riker a comrade.

Notice how O'Brien, who is an many ways the lynchpin character here if for no other reason than he spans both plots, gives a succinct, yet stirring, speech about being able to choose your friends and co-workers, but not your family. And notice how, in both cases, the story is resolved by an acknowledgment that the Enterprise is home: Worf discovers who his true family is when they re-create the Klingon rite of ascension on the holodeck and Riker decides to turn down the promotion to stay with his fellow travellers.

The problem is that nobody is behaving the way they're supposed to and there are logic holes big enough to drive a truck through that are strewn about everywhere. The story is trying to show how Riker is different from his father; that he forges authentic and meaningful personal connections that last while his father smooth-talks everyone he meets. And furthermore, that Will does not chase challenge just for the egoistic satisfaction of competition and proving himself-that he's a far wiser and more seasoned person than that. Will is genuine, while Kyle hides behind a veneer of charisma to distract us from the fact the only way he knows how to interact with people is to compete with them. Will's also supposedly better at conflict resolution, which makes sense as he lives on the Enterprise: He apologises to Doctor Pulaski for intruding on her personal life when Kyle has never apologised for anything in his life. And yet at the same time it tries to make Will out to be as bullishly and indelicately male as Kyle: The script has Doctor Pulaski tell him to “jettison [his] personal baggage” and there's that completely inexplicable scene in the observation lounge where Deanna gives an unwatchably to-the-note sitcom “Silly-men-can't-live-with-'em-can't-live-without-'em” grump.

Don't get me wrong, there are *plenty* of reasons to criticize and laugh at masculinity, but reiterating stock “Men are from Mars, Women are from Venus” sitcom cliches is the absolute wrong way to go about doing that. And furthermore, what does any of this tell us about who Will Riker actually is? That he's a bastion of utopian maturity except when he isn't? That he's moved beyond the shallow macho posturing of his father except when he hasn't? Hardly. Will Riker isn't Jim Kirk (or even Will Decker), except in the absolute most superficial sorts of comparisons that predate “Encounter at Farpoint”. Certainly not now when his backstory is more fleshed out and he's got his now-explicit Alaskan heritage and that whole North Woodsman aesthetic going for him (that I do admit I kinda dig) and we shouldn't be expecting him to embody the same kind of “masculine virtues” Kirk did (or was supposed to at least, considering William Shatner takes one look at a phrase like “masculine virtues” and laughs his ass off). Let's leave that back in the 1960s, shall we? That's not for us. It's for people like, well Kyle Riker.

(I suppose that's one reason why the Anbo-jyutsu ring that's the site of Kyle's defeat and Will's personal epiphany is adorned with the sacred marks “Kei” and “Yuri”. Although in this case the more appropriate ones might be “Lum” and “Ataru” and “Urusei Yatsura”, the series from which they hail: Urusei Yatsura is about farcical cosmic bad luck that happens to programatically idiotic men and the offbeat, quirky, and oftentimes equally idiotic, women who put up with them.)

But the bigger problems for me are in the Worf half of the plot. Geordi, for one, acts *completely* out of character, hypocritically claiming his ego isn't at stake while fuming at the Strafleet team going over his work and arrogantly brushing aside Wesley and Data's concerns about Worf. He should be the first person to notice something is troubling Worf or, if not, he should be the one who reaches out to him by organising the celebration on the holodeck. It feels like Geordi is being cack-handedly shoved out of his proper role in order to put Wesley back in his insufferable “I know you better than you do and can fix anything” first season characterization that, following a season of tiring and repetitive overexposure, Data is now perilously close to sharing with him.

While Doctor Pulaski is generally excellent in the Riker plot, she's out of sorts in the Worf one because of her reticence about Klingon culture: No, “Up The Long Ladder” hasn't aired yet, but Pulaski has already shown herself to be at least somewhat familiar with Klingon customs in “A Matter Of Honor”, so there's no reason for her to act so squeamish here. The only person who's remotely on point here aside from O'Brien is Captain Picard, because Patrick Stewart so jubilantly sells Picard's glee at Riker's upcoming promotion: Clearly, Picard doesn't like thinking of Riker as a subordinate and is not only proud of him, but giddy at the prospect of having an official excuse to treat him as an equal.

(Then there's the small matter of Worf asking to join Riker on the Drake. The point of the scene is to emphasize the danger of the mission Will would be taking on by having Worf insist on accompanying him to protect him. Only problem is this scene happens before it's revealed how dangerous the Drake's mission is going to be. Oops. I'm not really one for plot nitpicking, but this sort of oversight does torpedo the episode's logistical coherence and effectiveness some.)

“The Icarus Factor” is an episode I've been harsher on than was probably strictly necessary. It's got some important character moments and has one or two nice scenes, but it's structurally and conceptually a sloppy mess, and that's concerning as it's yet one more example of Star Trek: The Next Generation ineffectually trying to redefine itself. That it's another mediocre episode in a run of mediocre stories from a mediocre season is telling inasmuch as it shows us quite clearly what the new mediocre looks like...and yet Star Trek: The Next Generation is supposed to be at least in part about constant self-improvement. It's imperative that it *never* settle for mediocrity precisely *because* it needs to be always striving to to improve itself. And once again, it's not being allowed to.
Posted by Unknown at 11:00 PM