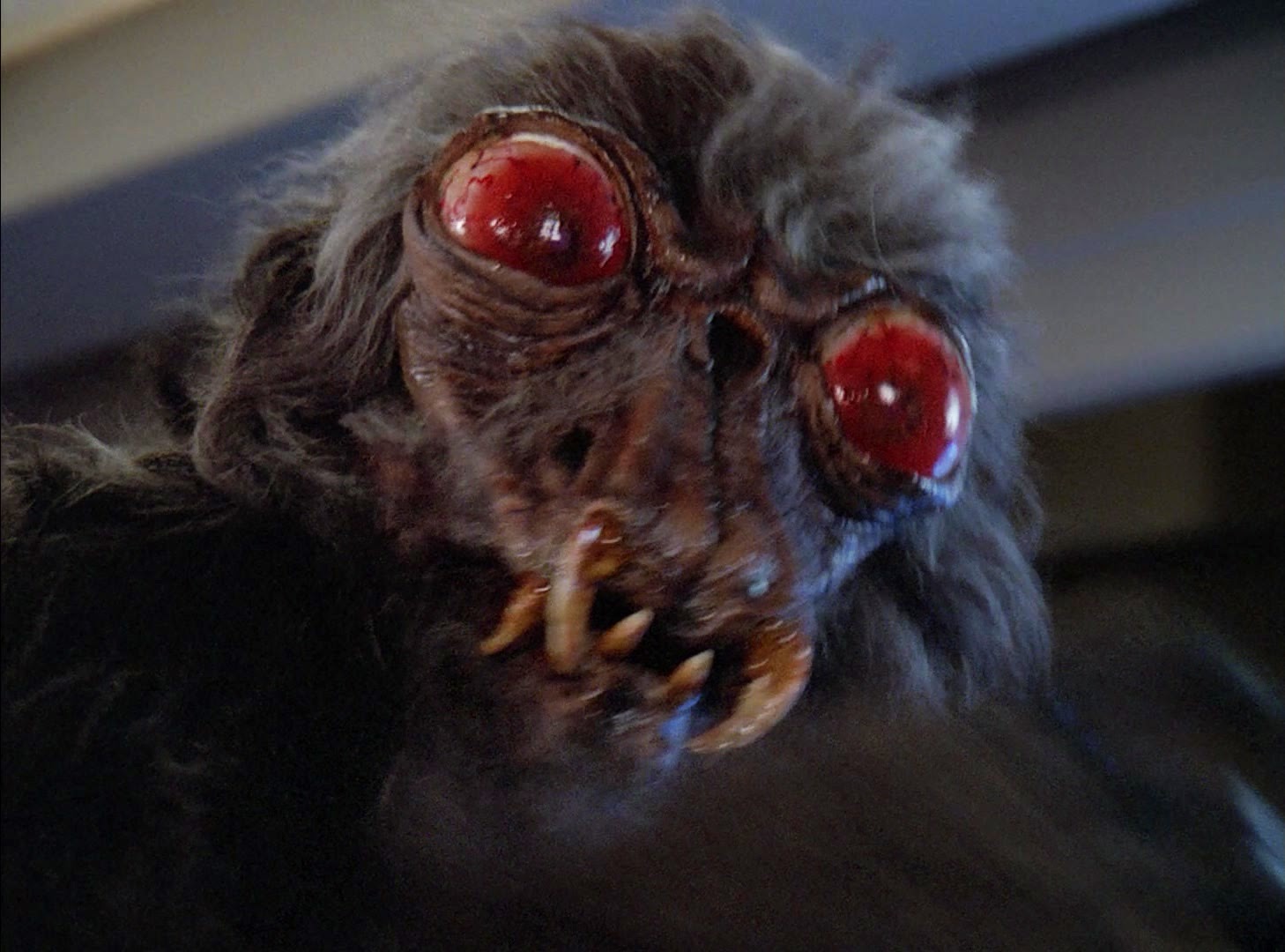 Part of the original justification for adding a child character to Star Trek: The Next Generation was to show how regular teenagers could come to terms with regular teenage issues in a utopian setting such as this. The idea was that in this place and at this time, teenagers' perspectives would be valued and respected as much as those of any other person, and they would be able to resolve their inner conflicts in ways kids don't always have the opportunity to do in the real world. It's a nice conceit, and you can see how it would be in theory easy to weave this theme in as a manifestation of the show's children's television for adults motif.

And then there's Wesley Crusher. And episodes like these. 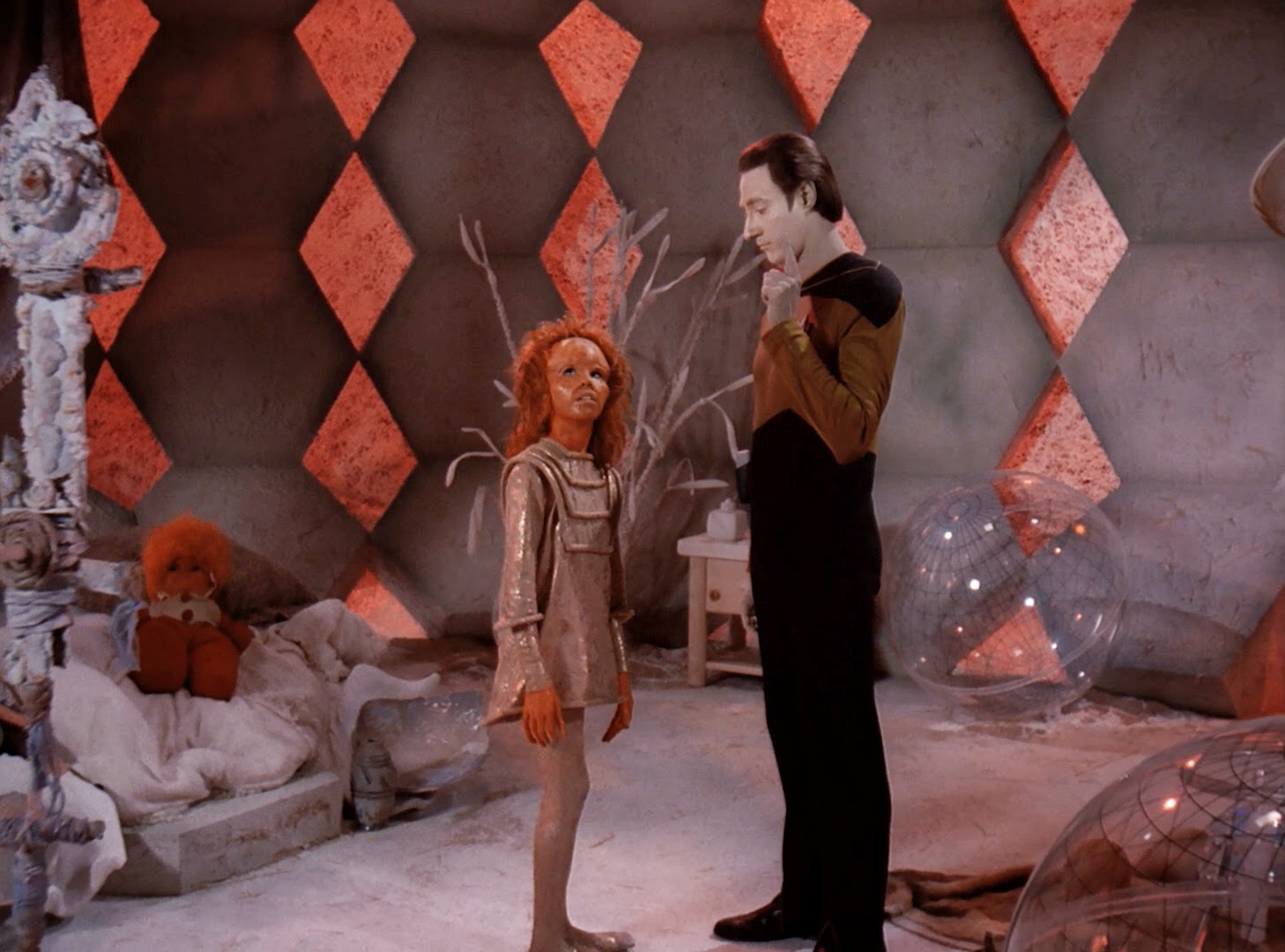 Both of these episodes deal in some way with developing Wesley as a character and both of them fail pretty conclusively at it. To be fair to “The Dauphin” and “Pen Pals”, there isn't really a whole lot for them to actually go off of to begin with: Of all the Star Trek: The Next Generation characters, and with the utmost of respect to Wil Wheaton who consistently and gamely does the best he can with often unworkable material, Wesley Crusher is the one who has the most seriously and egregiously fatal conceptual flaws, and this makes it *extremely* hard to get behind anything he's involved in. “Pen Pals” isn't even expressly about him; his plot only comprises the B-story of an episode that is largely about Data. Problem is, Data himself has picked up Wesley's slack from the first season to become badly overexposed himself this year, and his story ultimately boils down to another Prime Directive runaround which means it sucks by default. Frankly, the fact that the Prime Directive has gotten us to a point where it would condone us leaving an innocent and adorable little alien girl to die on a planet that is literally exploding should tell us all we need to know about how cartoonishly evil, simplistic and impractical it is as a philosophical worldview.

The only thing remotely of interest in regards to the A-story of “Pen Pals” is Captain Picard's objection to helping Sarjenka's people, that the destruction of her planet and civilization might be part of a larger “cosmic plan” the Enterprise is not meant to be a part of. This is obviously intriguing considering the ethical foundation of Dirty Pair and all the Dirty Pair references that have been showing up in Star Trek: The Next Generation lately. Typically when Kei and Yuri inadvertently bring about the destruction of a planet, it's because something had marked its people very early on in the story as dangerously self-destructive, toxic or reactionary. It's also not usually the case that the girls' investigations end in a 100% fatality rating: More often than not there's a remnant that survives as a reminder to the readers that their mission is a positive and constructive one in spite of what it looks like, and that those who survive will probably end up with a better life than they started with. When the universe *does* have Kei and Yuri Kill 'Em All, there's usually a very good reason, like how the warring factions of “Hire Us! Beautiful Bodyguards are a Better Deal” and Dirty Pair: The Motion Picture were a threat to themselves and others, or how the prison station in “Prison Uprising. We Hate People with Grudges!” was a monument to Panopticism.

So the question becomes, did the Dremans do something that was somehow *that bad* to warrant being doomed to be wiped off the galaxy? We certainly never get any indication of that anywhere in the episode, and furthermore this kind of plot becomes exponentially more worrying when taken out of Dirty Pair (where extraterrestrial life doesn't exist, or if it does it's so beyond our comprehension such that it's practically indescribable and ineffable, so we're only dealing with humanity in the general) and placed in Star Trek, where we're talking about entire species and ethnicities, and that's not touching on the latent militarism and imperialism that still haunts Star Trek. Maybe that's why Captain Picard eventually does allow the Enterprise to help. Perhaps we could say Sarjenka and Data were meant to find each other just as the Enterprise was in the system conducting geological surveys precisely such that it would be in a position to help her and her people. That's certainly a nicer twist on the plot that would be befitting of Star Trek: The Next Generation. Funnily enough, “Pen Pals” is the first episode in awhile that doesn't have an explicit Dirty Pair reference I was able to spot.

(It's also worth briefly noting the choice of characters here: Melinda Snodgrass campaigned for Data to be the one to talk to Sarjenka, because his literal-mindedness as an android gives him a childlike veneer that works nicely with the story's themes.)

So with that all said let's talk about Wesley Crusher. In “Pen Pals”, he takes his first command as the leader of the survey team that studies Drema IV and must face such crushing command decisions as how to react to his science officer questioning him and daring to point out how his positionality might mean there are some things he's not as informed about as others. But, as Commander Riker so helpfully points out, Wesley is in charge just like Captain Picard, and since nobody questions the captain’s authority (I guess we'll forget about “Lonely Among Us” and “Time Squared” for the moment) nobody should question Wesley's either. And, sure enough, the remarkable, brilliant and wonderful boy makes the crucial discovery that saves Sarjenka and her people.

This actually ties nicely in with “The Dauphin”, which was a similarly solipsistic yarn about how uniquely tortured and special Wesley Crusher is. It was supposed to be a love story about awkward teenage feelings and emotions but, seemingly in a dogged attempt to sidestep every single one of its core themes and values, Star Trek: The Next Generation forces us to watch Wesley going on about *his* pain and *his* confusion in a rote recitation of every single godawful young adult story about teenage boys that has ever been written since the dawn of time. The plot is basically “Elaan of Troyius” without the racism, as it features a beguiling young woman duty- and honour-bound to bring peace between two warring factions who tragically has no time for love from our sincere and eager Nice Guy.

Though it may not be as catastrophically and disgustingly racist, as “Elaan of Troyius”, “The Dauphin” keeps every ounce of its insufferable sexism, as its entire plot can be succinctly summed up as “bitches be cray-cray”: In no short order, we have Commander Riker flippantly pointing out how someone like Salia won't “have time” for Wesley (career women-such ice queens, amiright?), Salia giving stereotypical tsundere “hot and cold” “mixed signals”, Wesley actually bemoaning how confusing girls are and this gem of dialog between him and Worf:

So that can pretty much fuck all the way off.

In the end, of course, Wesley shows up all of his inept peers and elders by simply visiting Salia's room and talking to her, because of course he does. And that, right there, sums up the problem with Wesley Crusher so neatly: He's cishet male privilege given form. Both of these episodes in one respect or another deal with Wesley being reassured of his natural, God-given authority because he's either male, he's in a position of power or because he's a Nerd (as if there was actually a meaningful difference between those things anyway). If there's every any conflict, it's *always* brought upon him by *other people*, all of whom are some manner of scary, different, confusing or less competent than he is. All Wesley Crusher ever has to worry about is the haters and the little people who keep bothering him and cramping his style. And what's up with that? After all, he didn't do anything to them, right?

For real, fuck this. Fuck him. Fuck these episodes. This is the exact wrong kind of “children's television” Star Trek: The Next Generation ought to be trying to mould itself as and is precisely the reason why I can't stand Wesley Crusher.