“Spirits Within”: The Inner Light 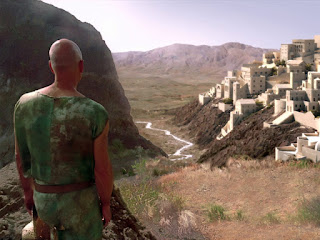 There's really nothing much to say. It's simply one of the single greatest moments in the history of Star Trek: The Next Generation, and probably all of Star Trek. It deservedly won a Hugo Award back when the Hugo Awards actually meant something. If it's not the single greatest episode of Star Trek: The Next Generation it's a contender; the connoisseur's pick for those who don't want to tow the fandom line and pick “The Best of Both Worlds”. It's damn near close to perfect. You don't need me to tell you that.

It's almost funny though that “The Inner Light” gets all the accolades, because to me it runs so contrary to everything we're told makes “good drama” and a good episode of this series in particular. There's no “conflict” about Captain Picard's suppressed darkness and nobody learns a lesson about the lengths they'll go when pushed and there's no angsty, broody mediations about how life is pain. Rather, this is a story about performativity and storytelling. In fact, it's a story so willfully about performativity that it's not even really about Captain Picard at all, even though it was envisioned as a story about “Picard's unlived life” and features some of Patrick Stewart's very best acting to date. The probe is described as a form of “ancestor simulation”, and that's such a wonderfully loaded term-One I'm obviously quite drawn to. It's Eline's (or rather, a manifestation of her's) final words that spell it out: “Now we live in you. Tell them of us”. Words to remember and return to.

If you were for some reason inclined to be negative about this episode, it is possible to read it as a particular kind of “down to Earth” story, showing how travelling the universe in starships is less preferable to settling down to raise a family and spend the rest of your life with your soulmate in a quiet, sleepy little village somewhere. In fact this is bolstered by the one line in the whole production that does grate on me a little bit, namely when Kamin says “I always believed that I didn't need children to complete my life. Now, I couldn't imagine life without them”. As someone who is childless by design this stings a bit, smacking as it does of heternormativity and reproductive futurism. But the thing to remember here is that this is technically Kamin speaking, not Captain Picard: One of the reasons why this is such an oustanding Picard episode, possibly the definitive, is how it plays on the narrative role he's always had. Since the very early days of the show being hamstrung, one of Captain Picard's strengths as a character has been his ability to fill whatever narrative role the diegetic philosophical fiction requires (you could, actually, probably redeem “I, Borg” a bit by thinking about it in that light), and this episode simply takes that and writes it back into the text.

So there is already that level of performativity built in from the outset. But the curious thing is that this isn't exactly the way “The Inner Light” operates. Not entirely, anyway. There's a whole other level that truly makes this story a one-of-a-kind masterpiece, and it's the reason “The Inner Light” isn't just another classic, it's one of Star Trek: The Next Generation's rare truly defining moments. It's Jay Chattaway's haunting, Celtic-influenced score (one of his all-time greatest in my opinion) that gives us the first hint as to what this is really all about. Recall how ancient tales of the Otherworld spoke of heroes who would travel by invitation to the Fortunate Isles across the sea where time stands still to live among the faery and Elven gods and goddesses in an eternal summer of youth. Sometimes they would be cautioned against returning to the mortal world, where entire ages might pass in the wink of an eye, as they might find everyone the knew and loved to be long dead, or they might succumb to rapid aging and die themselves. Because this is what “The Inner Light” really is: A fairyland epic for the science fiction age.

But it's a very peculiar kind of fairyland epic. This is not a story where a voyaging hero from the mortal realm crosses the sea to abandon his rustic origins. But it's not the opposite either; that would be an epic about a god becoming mortal extolling the virtues of heteronormative wedded domestic bliss amongst precious transience. “The Inner Light” does touch on this by relating how happy Kamin and Eline are throughout their many decades together, but this is subverted at the end by returning to Enterprise and all throughout by the fact that this isn't really Captain Picard, more like Captain Picard playing Kamin's role and bringing elements of his positionality to the performance. And then there's that tiny little niggling thing about how time works in this story. Kamin spends several decades on Ktaan waiting for their sun to die, but for Captain Picard and the rest of the bridge crew it is, famously “only twenty-five minutes” (speaking of the bridge crew by the way, I have to give a shout-out to poor Marina Sirtis, who is MIA for what's possibly her show's finest hour).

See, this is kind of the reverse of how Otherworld stories tend to operate. Picard seems to spend years and years in another land when it's really only been a few minutes. Why? Quite simply, because Captain Picard didn't go to the Otherworld. He's not a mortal hero who travelled to the land of Faery, he's a Faery God himself who spent a few years out of his immortal existence among the mortals, learning how they lived and loved and using that knowledge and experience to enrich his own life back on the Fortunate Isles. An enlightened, extraterrestrial and divine anthropologist and also the archetypal voyager: Someone who can live an entire fulfilled, satisfied life and still keep on living. Still keep growing. It wasn't his life, but it's a life he understands, respects and treasures. And he's a better person for having lived it.

This actually isn't the first time Star Trek has tread near this territory, but it's the best. Way back in the Original Series there was a story aptly called “Wink of an Eye” that could also be read as an inverted fairyland epic, but that reading is hamstrung a bit by the fact it was the Original Series and the third season and therefore sorta kinda a train wreck. The utopian interpretation for that episode, as was the case for all of that show, needed to be grafted onto it after the fact. “The Inner Light”, by contrast, is perfectly exquisite. It says everything it needs to say and does everything it needs to do humbly and sublimely. Damn straight this won an award and is remembered as an unmitigated classic: It's one of the few stories that actually earns all the accolades it gets from fans, and is actually probably entitled to a few more. It's a flawless execution of everything Star Trek: The Next Generation is supposed to stand for and be about coming right when it was needed the very most. This may actually be the definitive Star Trek story period.

In the end, we're all only left with the memories. Images of times and places and people imprinted on our souls. Part of learning more about who we are involves coming to terms with what those mean to us, because it's them we turn to when we need to know ourselves better. People and experiences come into and out of our lives and while very few of them stay with us always in the present moment, they all help shape us to one extent or another. I think this may be the root of the deification of ancestors in many cultures: To paraphrase a thinker far more talented and perceptive than I, you worship them because they went through it long before you did. And then there's that “ancestor simulation” thing again. What is a role model but someone you turn to in order to emulate their best qualities? Their soul and their works live on through you and everyone else whose lives they touched throughout their being.

It's interesting that I should reach “The Inner Light” when I do. Part of Vaka Rangi, the most important part (for me at least), is about making peace with a huge portion of my past, trying to understand fully the role it played in shaping the person I became, but also in a sense laying it to rest in order to move beyond it. My life since beginning this project has been a positively uncanny example of life imitating art in this case, and I was just thinking earlier about how disappointed I've been in this run of stories; how so many of them fell short of the (in hindsight inevitably) overinflated memories I ascribed to them. It's a continually dispiriting process for me to keep seeing just how much I personally projected onto this particular bit of pop culture ephemera from the late 1980s and early 1990s. And yet even so I can't shake my loyalty to certain things about it, or at the very least least to the process of growth and self-discovery it will forever be linked to in my mind.

Some part of all this will live on within me, forever and always.
Posted by Unknown at 11:00 PM

Email ThisBlogThis!Share to TwitterShare to FacebookShare to Pinterest
Labels: Star Trek: The Next Generation, TNG Season 5