“For The Great Mouse Ancestors”: The Nth Degree 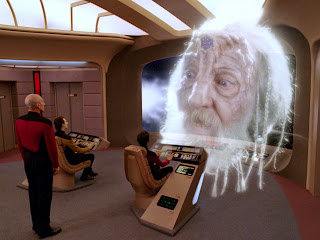 Here's another episode I never caught during Star Trek: The Next Generation's original run. In fact, I kind of went out of my way to avoid “The Nth Degree” because I always thought it sounded completely ridiculous, a suspicion not helped by the fact it's always represented in magazines and reference books by stills of the final effects shot; that of the Cytherian ambassador. An effects shot which calls to mind descriptors such as “amazing” and “incredible”, except not in their original unironic contexts. So the other night, I actually sat down to watch this episode critically for the first time.

It's actually not bad. But I was right about the effects shot.

“The Nth Degree” is in a lot of ways a response to the third season. There's Barclay back, of course, but it's also another “Let's Do” episode, much like “A Matter of Perspective”. In both cases, the tack the show takes this time around is a little bit more nuanced and appreciable than it was last year. We'll talk about Reg later, but the story we're “paying tribute” to this time is the award-winning science fiction short story Flowers for Algernon, about a janitor who undergoes a special treatment to rapidly raise his IQ, but it doesn't take. We've actually already looked at Flowers for Algernon once before, in the context of the Dirty Pair TV episode “The Little Dictator! Let Sleeping Top Secrets Lie”, which was likewise an “homage” to the original story. The thing about the Dirty Pair episode though is that it was, charitably speaking, a gigantic shitshow, with excruciating forced wackiness, horrible characterization of Kei and Yuri, casual racism and a plot so overblown and dense it forgot to actually be about anything.

“The Nth Degree”, thankfully, isn't, and from a plot perspective this is largely due to how it approaches its source material. “The Little Dictator! Let Sleeping Top Secrets Lie” tried to show how anyone who undergoes the same kind of procedure Charlie does in the original story would naturally try to take over the world, believing themselves to be superior to others (as Yuri memorably puts it, “Listen. All intelligent beings eventually grow tired of taking orders from idiots.”), but it ultimately gets lost in its own central conceit of having a fascist regime ruled by a clan of hyper-intelligent mice before it can actually take the ethical stand it needs to, which should have been a commentary on the privilege of education and the elitism that so frequently accompanies it. The show almost gets there, but I had to bring in Avital Ronell's reconceptualization of stupidity eighteen years ahead of time to redeem it enough to make its own point.

“The Nth Degree”, by contrast, drops all of the troubling connotations that would go along with a fixation on intelligence quotients to hone in on a different angle. It uses the Flowers for Algernon plot to explore what happens when a person undergoes a life-changing, transcendent experience...and then what happens to them afterward. This ties in tightly with very uniquely Star Trek: The Next Generation themes, in particular how we learn and grow through the experience of travelling and voyaging as part of a community. So Barclay is almost the perfect character for this setup, seeing as how overcoming anxiety and neurosis is such a part of who he is. And Dwight Schultz is unarguably brilliant here, pretty much stealing the show from everybody else hands down. And that takes a lot when you're dealing with this cast. But I was focused on him all throughout-The way Schultz portrays Barclay's “bad acting” through impossibly great acting is a masterclass of recursive performativity (and how cool is it that it's alongside Gates MacFadden's Doctor Crusher and her diegetic theatre?) and the way he conveys his steadily growing confidence and understanding is absolutely mesmerizing.

It should be said, however, that neither “The Nth Degree” nor “The Little Dictator! Let Sleeping Top Secrets Lie” truly engages completely with Flowers for Algernon. One of the major cruxes of the original story was the way people treat and act around neuroatypical people, or at least that was the idea. Trying to equate Barclay with Charlie in this regard strikes me as inadvisable, so it's a good thing “The Nth Degree” doesn't exactly do that. Instead, it tries to use the idea of greatly enhanced intellect as a metaphor for shamanic experiences: Barclay understands things nobody else can and tries to convey what he's learned to his friends and colleagues, with mixed degrees of success. There's a risk that in doing this here the story will put him above the rest of the Enterprise crew, and truth be known it is something of an inelegant affair: The rest of the crew alternates between being scared, suspicious or holding the idiot ball.

The most egregious scene is probably when Captain Picard freaks out when Barclay finds a way to bend space-time with his mind to instantaneously transport the Enterprise anywhere in the universe, even though The Traveller has already proven that this is possible, although a case could be made Barclay didn't do a good job explaining himself and what he was attempting to do. This reveals another angle we can approach this theme with, which ties into what the text itself seems to want to be about: The whole thing about shamanic experiences is that they're only the first step. The trick is how to incorporate them into your day-to-day life to sublimate our material existence in the physical world. Sometimes it takes us our entire lives to come to terms with this, and Deanna says as much in the denouement. This is something that comes naturally to the Enterprise, and while maybe it hadn't to Barclay before now, he's been healed by it and the point of his character has become to convey this on a textual, diegetic level. It's another recursive performance; a play-within-a-play that sheds greater light on how Star Trek: The Next Generation works, and it's very fitting that Dwight Schultz be the one to convey that.

The original Flowers for Algernon only looked at this in a fleeting, more prosaic sense. What Star Trek: The Next Generation brings to the table is a greater awareness of spiritual thought and its connection to the mind-expanding experience of travel. It's a far better way to engage with a pre-existing text than the stock “Let's Do”-type stories the show might toss out in its weaker moments. Meanwhile, the Dirty Pair episode got hung up on totalitarian mouse cabals, so it's telling progress that we now have an episode like “The Nth Degree”.

And actually, this is a far better way to introduce yourself to Reg Barclay than “Hollow Pursuits”, and given what an important character he's going to become over the coming few seasons, this is as good an introduction to him as exists. In spite of being an ostensible sequel and in spite of how much the writing staff talks up “Hollow Pursuits”, you don't need to see that episode at all to get into this one. It's a perfect example of how Star Trek: The Next Generation ought to work: Acknowledging the past every once in awhile, but never slavishly reiterating it or allowing itself to be subservient to it. Although that said, it is worth noting how many sequels we've seen this year, and we're about to hit the most cringe-inducing part of that trend. Funny thing for a show that supposedly prides itself on “not doing sequels”.

But even so, “The Nth Degree” itself definitely gets my recommendation.
Posted by Unknown at 11:00 PM