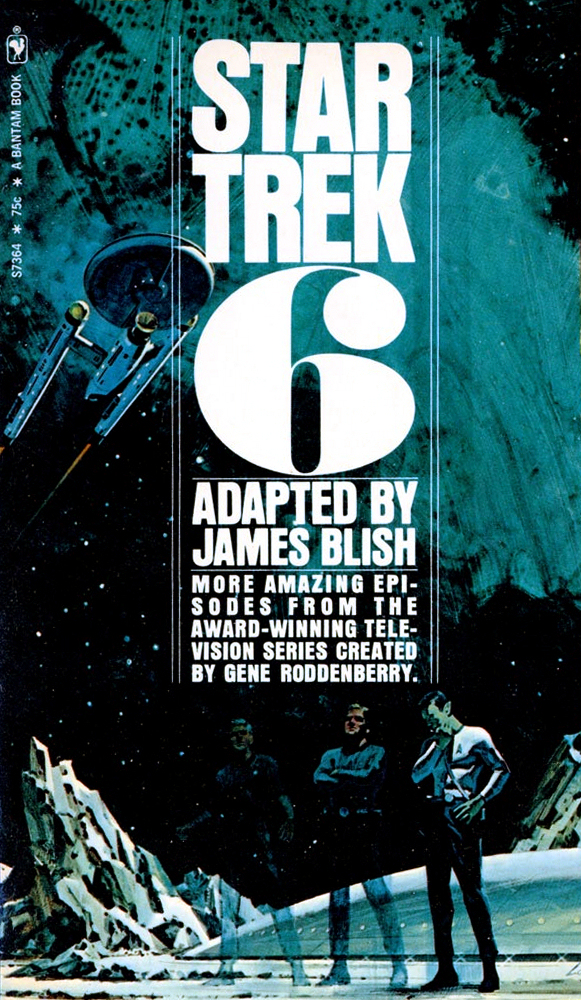 Nowadays, fandom-at-large tends to balk at the idea of a version of a Star Trek episode existing in another medium. It's inconceivable to many in an age of Netflix, BitTorrent and Blu-ray season box sets to think that the televised story might not be the most memorable and recognisable version of it. But, in an era when television was still just starting to shed its reputation for being disposable entertainment and before commonly available home video recording technology, the only way for fans to archive their favourite episode were from their translation and recreation into other media.

Thus, the concept of the television novelization is a particularly historical, and historically significant, aspect of media studies inexorably dated to this era, and largely this era alone: Indeed, the 1970s are essentially the last point in the history of TV where novelizations play a significant role: The first Betamax VCRs came out in 1975 with VHS coming the next year, and by 1978 both types of devices were mass-production, at which point the age of the novelization was for all intents and purposes over. Which is perhaps fitting for our purposes, as the Bantam Books series of Star Trek novelizations by James Blish is a strange beast even by novelization standards. Like its parent show, Blish's novelizations oftentimes felt like a leftover relic from a previous age, and their peak and subsequent decline in the early-to-mid 1970s in many way mirrors the twists and turns of Star Trek itself during this period.

The choice of James Blish to take on adapting Star Trek for mass-market paperback is at once curious and also somewhat telling. Blish was already an accomplished science fiction author and had been publishing stories decades before he began his association with the franchise. He was also, as you might perhaps expect, firmly and resolutely in the Golden Age tradition: Blish's background was in biology and after training at Rutgers and Columbia University, he became a medtech in the army during World War II. Afterwards, he became chief science editor for Pfizer. Before that, he was a member of the Futurians who were in fact not, as I initially suspected, the time travellers from the far future who sent a mutated King Ghidorah to fight Super Godzilla in Tokyo in 1991, but were actually a group of sci-fi fans-turned writers who got their start in the Greater New York Science Fiction Club. Outside of Star Trek, Blish is most known for his Cities in Flight series, which depicts a future where anti-aging drugs and antigravity devices are commonplace, and space travel has progressed to the point where entire cities can be propelled through the stars on their own volition, and his “Pantropy Trilogy” of short stories, exploring how humans might be biologically augmented to survive in extraterrestrial environments, thus removing the need for planetary terraforming.

At first glance then Blish appears to be possibly the most bog-standard Golden Age-style science fiction writer we've seen since Isaac Asimov. His biography does, in fact, seem to paint him as almost stereotypically so: If one were to come up with a list of qualities that might comprise a model Golden Age writer, well, Blish ticks pretty much all of the boxes. But, for neither the first nor the last time in Star Trek, things get a bit messier and more complicated when we dig a bit deeper. Namely, the Futurians were a profoundly weird group of science fiction fans. From what I understand, the Futurians broke away from the Greater New York Science Fiction Club because they believed it was the duty of sci-fi writers to help make the world a better place, and they had a significantly more leftist approach to doing this than was the norm in the 1940s. Quite a number of the Futurians were overtly interested in communism and Trotskyism, and actively looked to find ways to explore their political ideals through sci-fi concepts in their writing. They also, somewhat bizarrely, blended this with an *extremely* Golden Age faith in Modernist, technoscentific progress and futurism, as if things like Big Pharma or the military industrial complex were somehow ever going to agree to introducing full-on Trotskyism to the wartime United States.

However, the Futurians were also a group diffuse enough that no truly solid generalizations about the group's political ideology can be safely made: Isaac Asimov was counted as a member, for one, and Blish himself has been argued on multiple occasions to have had right-wing sympathies, a case largely built on his admiration of Oswald Spengler. So really Star Trek, with its confused mix of both extremely left-wing and extremely right-wing concepts, was sort of a natural fit for Blish. Perhaps predictably, he makes it clear in many of his novelizations that he considered himself a serious fan and took the Bantam gig at least partially out of his love of the show rather than because he needed to job for a paycheck. And, after Star Trek was canceled a second time (for real), it was Blish who, in the 1970 volume of his novelizations, became one of the loudest voices for the show's renewal, calling on his readers to write NBC urging to get it brought back. Blish also penned the first officially-licensed Star Trek fiction book targeted towards adults, Spock Must Die!, that same year (though not, as is sometimes believed, the first officially licensed Star Trek fiction book ever: That honour goes to the 1968 book Mission to Horatius which, perhaps tellingly, was a children's book).

It is likewise revealing to look at how Star Trek morphed under James Blish. Though his novelizations tended to be as accurate as he could make them, initially he was only given very early, preliminary scripts to work from so his work from this period bears far more differences from the aired episodes then the ones made after the series was canceled, when he had access to actual filming scripts (this also means Blish's books are some of the only remaining resources through which we can piece together the production history of the Original Series, as many of these draft scripts have since been lost). Blish did take liberties with the source material on occasion as well, however. Sometimes this added more nuance to the original story: In “Arena”, for example, Gene Coon was originally going to have the Metrons destroy the ship of the victorious captain rather than the one who lost as they considered that a greater threat to peace, and Blish, obviously working from an early draft, kept that twist in. Other times though, his additions made things considerably worse-In “Who Mourns for Adonais?” Blish removes all uncertainty that Carolyn Palamas was raped by Apollo and reinstates McCoy's glib anti-abortion joke from the denouement, which pretty much makes me hate him. Also, in “Turnabout Intruder”, Blish alters Kirk's final line


by having Spock chime in with

"If only she had been able to take pride in being a woman."


which just messes everything up in my opinion. It's certainly not that either Gene Roddenberry or Arthur Singer were especially progressive voices on gender fluidity, but there was enough ambiguity in the episode as aired that I was able to pull off a redemptive reading I'm actually rather proud of. Blish's take on the story though simply ends up feeling pretty gender essentialist, as if he's declaring we should all be satisfied with our lot in life and never try to change things. Blish novelized both of these episodes well after the Original Series was canceled so he definitely would have had the final scripts in these cases, and I find it tough to forgive him for that.

One thing that I find particularly interesting about the Bantam novelizations is that, regardless of how indebted Blish was to Golden Age science fiction, his Star Trek books absolutely *looked* like Golden Age science fiction. The cover art for these books is astonishingly beautiful: While I'm not too keen on the genre, I'm a sucker for gorgeous space art inspired by it and this is exactly the sort of thing that really turns me on. Starting in the 1990s, everything to go out under the Star Trek brand had to have a uniform and generic visual style, and it's a lot of fun to go back to a time before that to see all the varied and unique ways talented artists were inspired by the same TV show. My personal favourite covers are probably the ones for books 4, 6, 9, 11 and the alternate cover for 7: They all remind me of the jaw-droppingly lovely artwork done for Foundation that I linked to in my piece on that series, which is also incidentally the only thing about that series I genuinely enjoy.

In spite of the relative quality, or lack thereof depending on your take, of Blish's novelizations, the fact remains they occupy a rather strange space in the history of the larger Star Trek franchise. The point of a novelization is, of course, to give fans the ability to hold onto a copy of their favourite episodes in the days before home video. But from the beginning, Blish's books didn't quite have the sole claim to this: Desilu and Paramount's deal with Bantam was not an exclusive one, and at the same time Blish's stories were coming out, Ballantine Press also had the rights to Star Trek (and indeed it was them who would handle adapting The Animated Series), there were “photonovels”, graphic novels of episodes made of screenshots and speech bubbles and, of course, Gold Key was still regularly publishing comics.

But the biggest blow to the Bantam line was ironically enough its parent show itself: The last volume of Blish's novelizations didn't come out until 1977, by which point the Original Series had been in near-constant syndication for almost a decade...and VCRs were out. Indeed, the show was canceled and in perpetual reruns before the fourth book came out. This isn't like with Doctor Who where entire years of the show were just missing and never repeated (in which case a novelization really was your only chance to revisit a story): Star Trek was on the air all the time. If you wanted to see your favourite episode again, all you'd need to do is wait until it was rerun and, if you happened to be lucky enough to have one of those newfangled VCRs, you could tape it.

It's also important to note that it's not as if Blish's novelizations had no impact whatsoever either: Ron Moore says Star Trek 3 was the first book based on the show he ever read and he remarks on how important it was for him to see that other people were not just watching Star Trek but writing about it as well. And it's certainly true that these novelizations were the first exposure many fans had to the Original Series. But what the Bantam line ultimately was, I think, was a version of Star Trek by and for a certain kind of science fiction fan that reinforced their beliefs about what the show was supposed to be about. This was Star Trek by James Blish, a noted Futurian, colleague of Isaac Asimov and veteran sci-fi writer in his own right. For the upper middle class, technologistic subset of fandom, this would pretty much be exactly what they expected the show to be. And while this is not to say the novelizations were not bought by other types of fans as well, I'd be willing to bet the people reading these at least in part because of who James Blish was probably weren't writing Kirk/Spock fanfiction or jamming out to Mr. Spock's Songs from Space. What we have in the James Blish/Bantam Books then is most likely another step in the development of the type of fandom that's eventually going to come to define Star Trek, for both better and worse.
Posted by Unknown at 11:00 PM