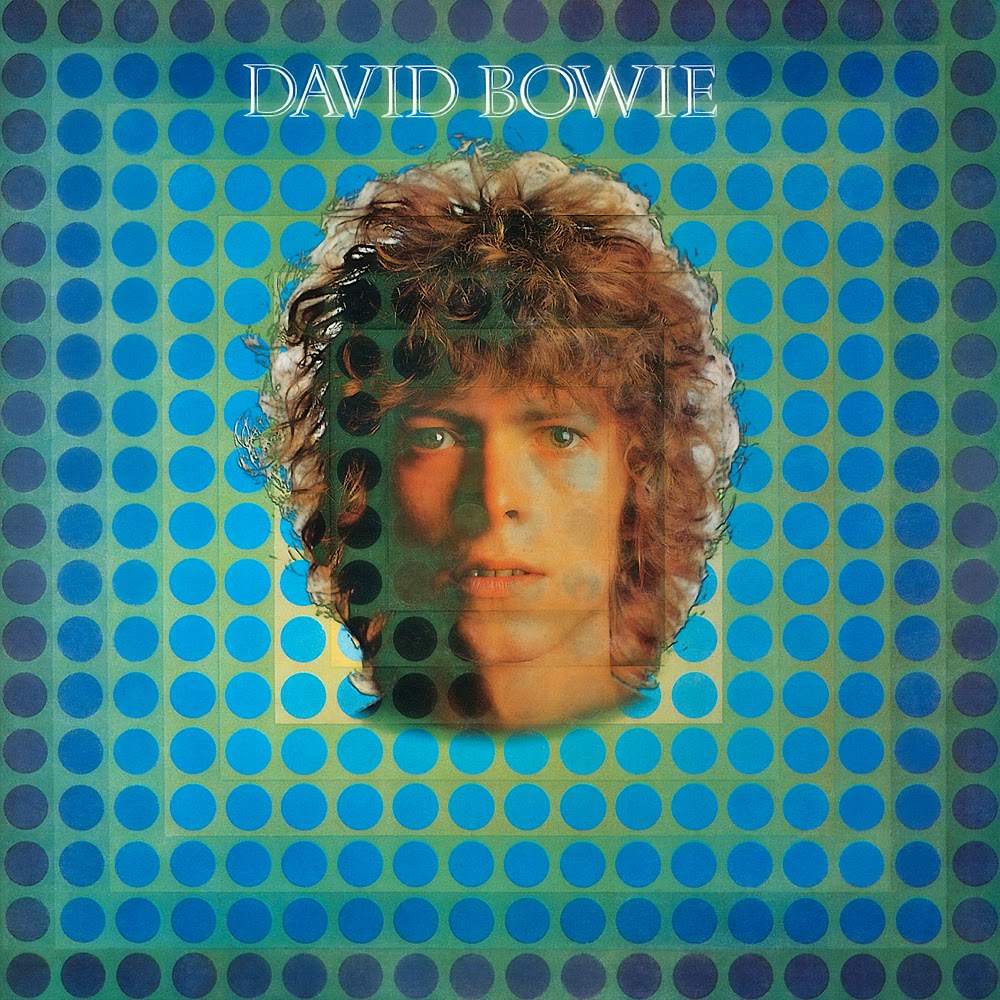 First of all, let me say I am without question the least qualified person in the world to be talking about David Bowie. I'm as familiar with him and his career as the next person I suppose, but I certainly wouldn't consider myself any kind of expert. There are people who have spent their entire lives following David Bowie and to whom his music is as formative and important as, well, Star Trek is to me I guess.

That said there's simply no getting out of writing about “Space Oddity”. It's an irreducible part of the cultural zeitgeist of mid-to-late 1969 and having it released not a month after the original Star Trek was canceled (for real this time) is about as revealing as it's possible for an amateur scholar of media history to hope for. However, I'm also not going to pretend I have anything remotely resembling original insight to offer about something this iconic: I'll just link you to this piece by Chris O'Leary out of Pushing Ahead of the Dame, which is pretty much the definitive take on “Space Oddity”, and just humbly ask for your patience as I toss out some random assorted thoughts about what this all might have to do with Star Trek and the state of science fiction at the end of the 1960s.

While “Space Oddity” has been rightfully read to be about a lot of different things, one of the most reoccurring motifs I notice in the song is, essentially, Bowie eulogizing the Space Age. Far from the Golden Age archetype of the bold, heroic space explorer, Major Tom is a soft-spoken, reserved fellow and his spaceflight is a gigantic publicity spectacle: It feels like the events of the song are being broadcast on national radio, and Ground Control even straight-up asks him what brand of shirts he's wearing so they can squeeze an advertisement into the live coverage. This would of course tie into the general countercultural belief at the time that the Apollo programme (don't forget Apollo 11 touched down that same summer) was in truth a giant PR stunt for the US government instead of an actual scientific expedition (which, sadly, sort of turned out to be the case).

And, although I'm not keen to draw direct causal links between the Apollo missions and the change in science fiction (or Star Trek, for that matter) there was a cultural shift that this speaks to. Whatever Apollo 11 actually was, one thing it proved pretty decisively is that when it came to outer space, science fact didn't really look like science fiction. Whether or not you think it's a problem for Star Trek that the Apollo missions proved the Moon was essentially a hunk of rock and dust (which I don't think it is: To me the Moon has always remained a beautifully stark, hauntingly evocative alien landscape: With the exception of the mushroom bit, Georges Méliès largely got it right, though Hergé was closer) the fact the space mission itself was troublingly bound up in Cold War politics, capitalist pandering and militaristic bicep flexing surely would be-It's hard to keep your sense of wonder about the universe with all that going on, especially when you and your friends are being relentlessly persecuted by the very people asking you to love NASA and the astronauts.

Really though, while there are parallels to NASA merely by virtue of how central it was to the space craze of the 1950s and early 1960s, “Space Oddity” actually has the closest parallels to the British space programme. Britain maintained an active interest in rocketry and the development of space vehicles as early as 1950, but by the 1960s the programme had seen the majority of its budget slashed and numerous project cancellations. By the 1980s the entire endeavour was all but dead, though the UK continues to launch intelligence and communications satellites to this day. But the idea of “British astronauts” in the vein of Alan Shepard, John Glenn, Neil Armstrong and Buzz Aldrin has always been something of a risible one, as best described in one of Eddie Izzard's most memorable routines: Izzard plays a young child conversing with a friend and is going on about all the heroic things he wants to grow up to be, such as the president and an astronaut, to which Izzard has his other character respond “Look, you're British. Scale it back a bit”. This then is what “Space Oddity” is lampooning.

This is particularly clear in the original version of the song used in Bowie's film Love You 'til Tuesday: Major Tom is a paragon of stereotypical British understatement and on multiple occasions describes his spacecraft as a “tin can”. Meanwhile, Ground Control are a bunch of ridiculously giddy, over-eager zealots. Everything is exaggerated and played totally tongue-in-cheek and there's a sense this really isn't something Britain ought to be concerning itself with: Leave the Final Frontier to the Americans. They're still foolish and naive enough to have dreams of empire. But there's also a sadness and sense of loss to “Space Oddity” too, and this is most evident in the single version of the song. Standing in stark contrast to the jaunty Love You 'til Tuesday cut, the better-known single is very low-key and elegiac, and almost the only instrument is Bowie's solitary acoustic guitar. Now it seems more like something really has been lost and that the death of the Space Age might actually be a cause for some degree of mourning.

Given everything that was wrong with the Space Age, the UFO era and the Golden Age of science fiction, it can be tough to tease out what that might be. After all, isn't the damning critique of any kind of space exploration, let alone the kind that went on in the mid-20th century, that big Western governments were spending so much money to indulge their nationalistic Cold War penis envy while neglecting all the very real and tangible injustices on Earth? Well yes, but who ever said space was the exclusive domain of space agencies, or that science fiction was the exclusive domain of people like Isaac Asimov and Arthur C. Clarke? The Sky has been one of the most profound and evocative experiences in human nature since as long as there have been humans. The Fremont culture knew this when they settled in Utah's Canyonlands, whose remote isolation and exposure all but forces people to acknowledge the wind and sky. The Polynesians too revered the Sky World as one of the Three Realms, and the ancient Hawaiians believed Mauna Kea (which is, strictly speaking, the tallest mountain on the planet) was the domain of sacred ancestor spirits and the seat of the Sky Itself, one of the primal creative forces of the universe.


In early 2013, astronaut Chris Hadfield recorded his own cover of “Space Oddity” on his return from the International Space Station. It was one of the last things he did before returning to Earth and retiring from spaceflight, and he altered the song to reflect this. Now, “Space Oddity” is the story of a man saddened to return to Earth because he knows he'll never again have the opportunity to have this kind of life-changing, life-affirming experience. It's good to be home, but things will never be the same again. Coming in 2013 where the US space agency seems to be going the way of the British one (and not entirely undeservedly, I might add) this seems especially poignant: Commander Hadfield would probably say more people could stand to have their perspectives broadened by travelling to Outer Space. What Commander Hadfield understands is the same thing understood not only by his fellow astronauts, but anyone who can feel the beat of the universe: We're part of the Sky too. It was the marriage of Rangi and Papa that birthed the world, and the world is enveloped in their embrace. The failure of the Space Age is that it tried to force materialistic nationalism and imperialism into the world of the Sky, we all laughed at how ridiculous that idea was. But the failure of the eras to come in its wake was to reject the Sky entirely and turn inwards such that they could not conceive of, let alone understand, a larger reality.

Furthermore we know that Star Trek at least has the potential to tap this tradition: See again the extremely not-Golden Age “The Tholian Web” and “Wink of an Eye”, which hint at uncanny mystical spaces and Otherworlds. Even “The Mark of Gideon” moved Star Trek away from its origins and marked its departure from the era of UFOs, Asimov and, yes, the Space Age. Outer Space is once more as it was: A realm that humbles us and vividly reminds us of humanity's connection to our larger universe. And this is something that astronauts know intimately, as they've witnessed firsthand the Earth and all its wonders and anxieties against the backdrop of the infinite. So, when Major Tom steps outside his capsule in “Space Oddity” and disappears forever into the void, David Bowie remains ambivalent. One the one hand he's attained his own form of Enlightenment and we are not to judge the manner in which the Enlightened achieve their apotheoses, but Major Tom has also abandoned the Earth, and Bowie knows the Earth's relationship to the cosmos is something to be treasured, not discarded. You can't have Rangi without Papa.

If the 1970s were the dawn of the Environmental Age, they were also the dawn of the contemporary Fortean age, and the countercultures, famed as they were for touting expanded and heightened states of consciousness in all forms, aren't going away either. Our worlds are about to get a whole lot weirder, and it's no longer going to be so easy to separate the world of the Stars from life on Earth and the noösphere of positionality and individual experience. But Star Trek, in spite of everything, was ahead of the game on this. And it's about to become more popular than it's ever been.
Posted by Unknown at 11:00 PM