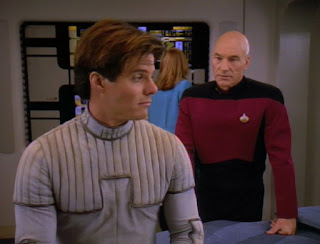 In the last book when I wrote about “The Survivors”, I mentioned that as far as I was personally concerned, the most notable thing about it was that it was a Star Trek: The Next Generation episode I somehow never managed to see in 25+ years and thus knew next to nothing about. It's a strange thing to have a fresh experience with a show you know this well. Back in the days of the TNN reruns, “Bloodlines” was that episode for me. Even moreso, in fact: At the time, I had no idea this episode even existed, in spite of owning a fair few reference guides and episode lists. It was like watching a brand new, never-before-seen episode of my favourite show for the first time in seven years, and was definitely an experience I savoured.

At the time I was pretty warmly receptive to “Bloodlines”: There was nothing I found explicitly objectionable and I more or less had an enjoyable evening with it. Over the years though it has faded from memory somewhat, partly due to my hazy 1980s-90s memory combing with my hazy 2000s memory conflating it with “Suddenly Human”. Revisiting it for this book, however, the pretense is entirely gone and it's evident this is a mediocre, ill-advised misfire. In fact it turns out that part of the reason I kept confusing this episode with “Suddenly Human” is that they're basically the same story: Captain Picard takes on a troubled young man with a predilection to get into trouble, adopts the role of a father figure and tries to be a mentor for him. The difference this time is that we're meant to believe that the kid in question, some guy named Jason who's so forgettable I've already forgotten his last name and I just had Memory Alpha open a minute ago as I sat down to write this, actually is Captain Picard's son for much of the runtime, though he actually isn't.

As a result of this basically just being “Suddenly Human” again but with a Ferengi genetics experiment revenge plot tossed in for good measure (oh yeah, DaiMon Bok is back, did you miss him? He was supposed to be the main thrust of the plot, but he's even less remarkable than Jason whatsshisface), all of the criticisms I had of that episode still apply. There's been, over the course of the series, a peculiar fixation on forcing Captain Picard, a man who is not a parent and manifestly was never meant to be one, into a parental role, to the show's detriment. First of course we had Wesley Goddamn Crusher, and the seven year on-again-off-again abortive plot to make him Captain Picard's surrogate son. Then we had this episode's antecedent in “Suddenly Human”, “The Inner Light” and its directionless follow-up “Lessons” (where the notion lurked around the paratext if it wasn't overtly dealt with), and now this. I'm probably forgetting some things, but those are the most notable instances. I really question the wisdom of constantly hosting children on this crew when frankly none of them are amazing parents (“Firstborn” aside, Alexander was no more successful than Wesley, and you can keep “The Offspring”) when to me it's a far more obvious move to contrast them (though in a non-judgmental way) with Commander Sisko or Miles O'Brien. There are all different kinds of people in the world, some of who are meant to be parents and others who aren't. I don't see why we can't acknowledge and celebrate that.

There are a few lines of criticism along this tangent that we can say are unique to “Bloodlines”, however. Namely, where the kid in “Suddenly Human” is meant to be a generic street punk who eventually proves he's part of a warrior society, Jason is tacitly coded to instead be representative of the kind of person the show has at times insinuated Captain Picard was in his own youth. Stories like “Tapestry” and “The Measure of a Man”, as well as this episode's own red herring that Jean-Luc may have knocked up Jason's mother have (wrongly, in my view) established that the Captain was something of an insufferable rake as a young man. So when Jason is revealed to be a womanizing outlaw, we're supposed to read that as a possible clue that he really is Jean-Luc's son. Happily for my reading, though unluckily for the story's coherence, the episode doesn't actually play that angle up textually: Captain Picard bemoans not being there for his “son” because he feels he could have kept him from going astray, implicitly setting up a conflict between their personalities instead of a kinship.

We can get a further angle on this by bringing in the fact that “Bloodlines” feels derivative of not only “Suddenly Human”, but also Star Trek II: The Wrath of Khan and Captain Kirk's relationship with Carol and David Marcus. There, however, the captain's relationship with an estranged son he never knew is not intended to be the point of the plot thread: Carol Marcus explicitly decided to raise David on her own. The matter of influence and of being a role model, whether positive or negative, is actually a nonissue to Wrath of Khan: Carol Marcus even says different people have different worlds, and she wanted David in hers. She's not blaming Kirk for not raising him, she didn't want him to. Not necessarily because he would have been a bad influence, but because she wanted her son around her and her line of work.

If this is Star Trek: The Next Generation, we should expect a more mature and nuanced handling of these potential issues, even if they do turn out to be irrelevant in the end. For example, if Captain Picard's concern was more explicitly about how Jason's lifestyle is basically a romanticized version of Captain Kirk's (down to the womanizing DaiMon Bok would have us believe is also responsible for Jason's own birth) and he made it clear how selfish, irresponsible and dangerous that lifestyle actually is (just kidding. No way would Star Trek ever seriously call out the Original Series on anything). But the script never gets us there, leaving the story wandering around without a real purpose. When Original Series Star Trek, and not only that but Nichols Meyer-penned Original Series Star Trek, is giving us stronger utopian messages than Star Trek: The Next Generation, that's a bad sign right there.

But I suppose the biggest question of all I have is why was it felt a story like this is necessary? Why do we need to randomly dig up dead and buried plot threads from almost a decade ago? Who's going to notice or care at this point? Is there really more to gain by resurrecting them that counteracts the necessary diminishing returns of doing so to begin with? Can't we let it all just rest? We may be going forward to oblivion, but at least we're still supposed to be going forward.